After a tremendously successful debut of Halloween Horror Nights 2014, Universal Orlando this past weekend began its annual Unmasking the Horror tours, offering fans the ability to walk through six of their eight haunted houses during the day.

The tours offer the unique ability to see the incredible detail and artistry that goes into creating each of these elaborately themed experiences without worrying about any scares. No actors are present. No special effects or sounds are played. The house lights are on, leaving it plenty bright to see every scene. But most importantly, photography is allowed.

So this week I bring you inside each of these Unmasking the Horror tours in a photo series filled with all the gory details of six haunted houses: Alien vs Predator, Dollhouse of the Damned, From Dusk Till Dawn, Halloween, Roanoke Cannibal Colony, and The Walking Dead.

Universal does not permit video or audio recording during these tours, as they fear fans would not book them after seeing and hearing that content online. But no online photo gallery can possibly be a substitute for walking through these elaborate environments in person. So while you enjoy the photos below and the rest of the pictures to come this week, consider booking the tour yourself. You won’t regret it.

Before we get to the lights-on tour, take a moment to experience the Alien vs Predator house as seen with full scares in show condition:

The most impressive aspect of seeing the Alien vs Predator haunted house with the lights on is the opportunity to get up close with the elaborate xenomorph puppets that populate the maze. They’re demonstrated during the tour, also available for fun personal pictures / selfies. This alone is worth the price of of the tour. 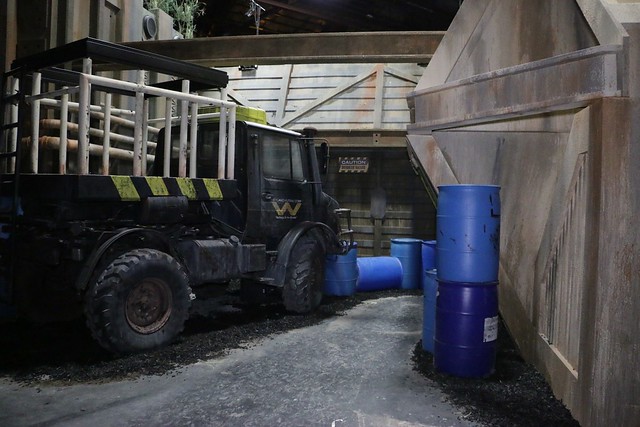 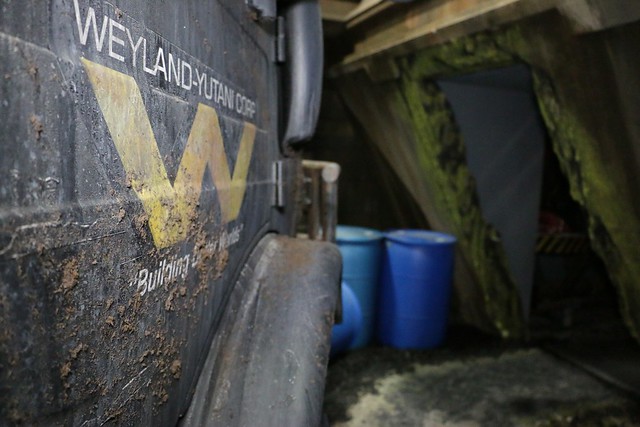 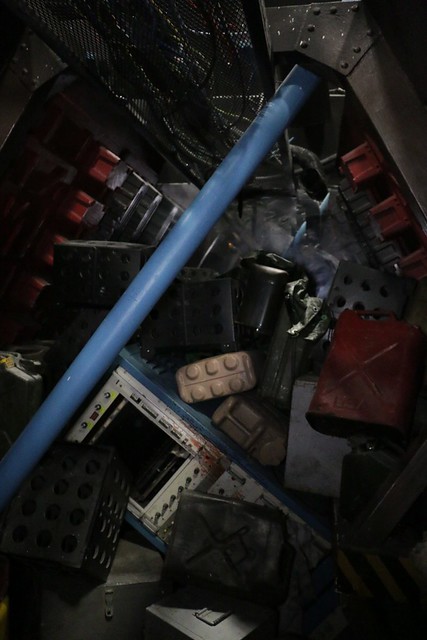 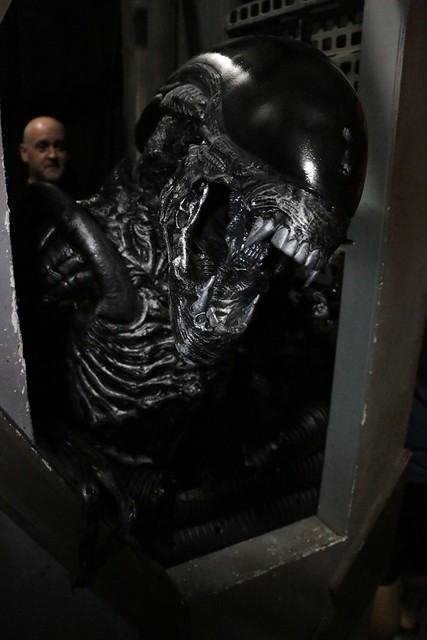 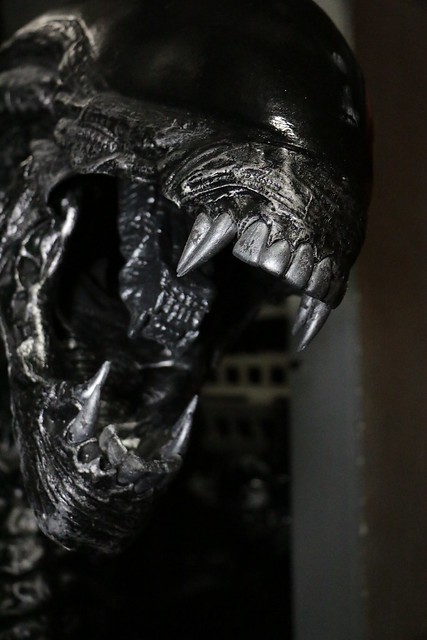 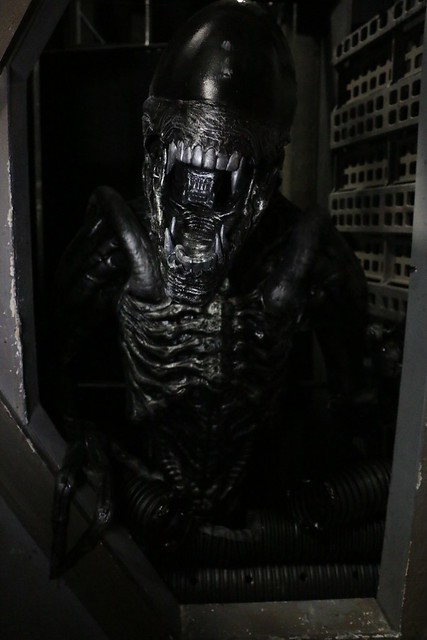 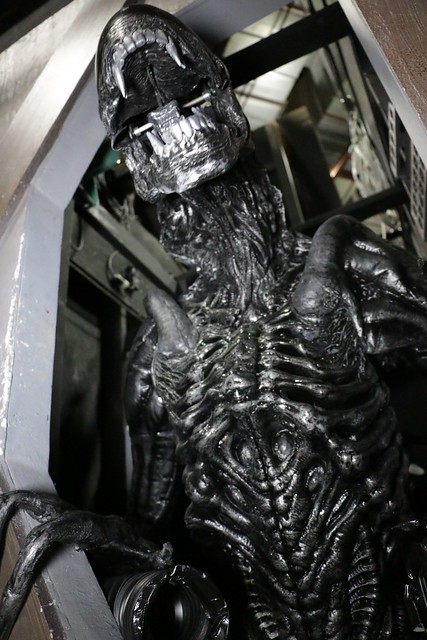 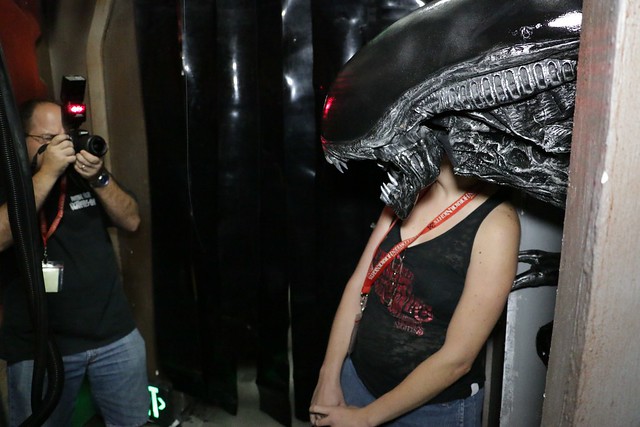 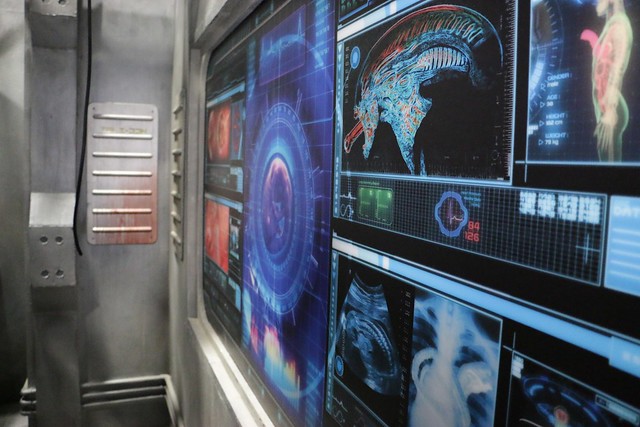 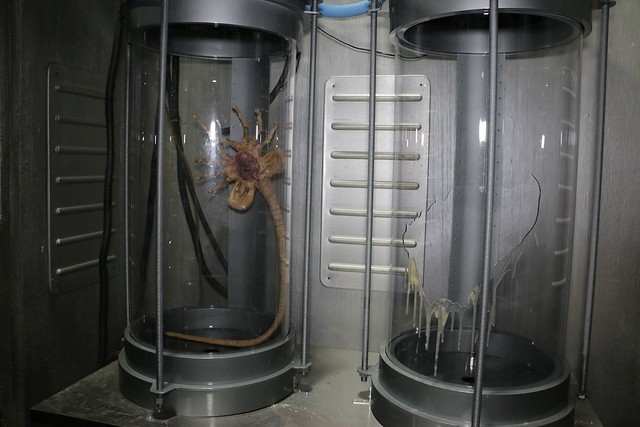 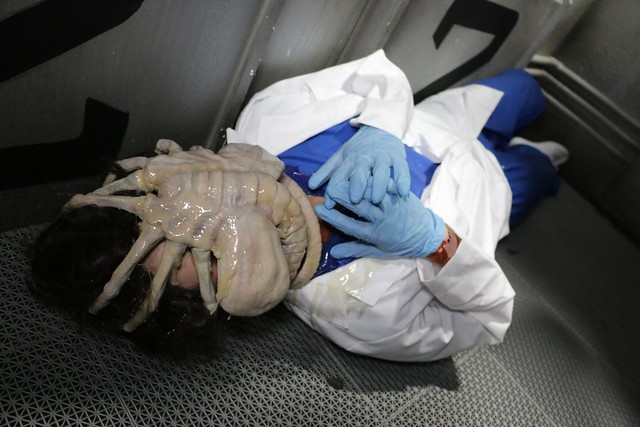 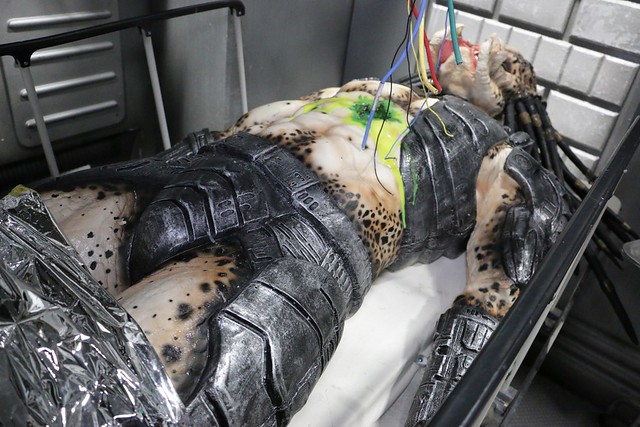 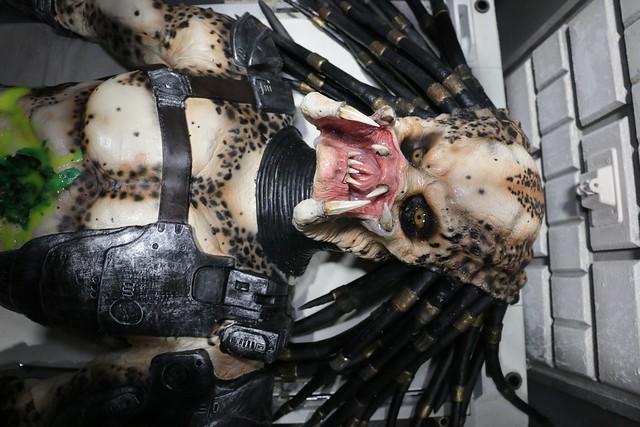 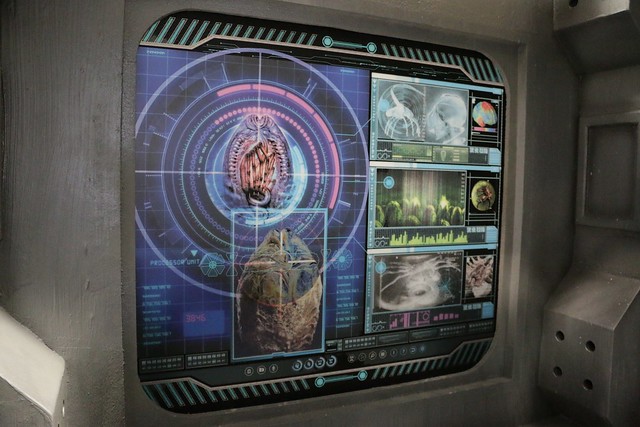 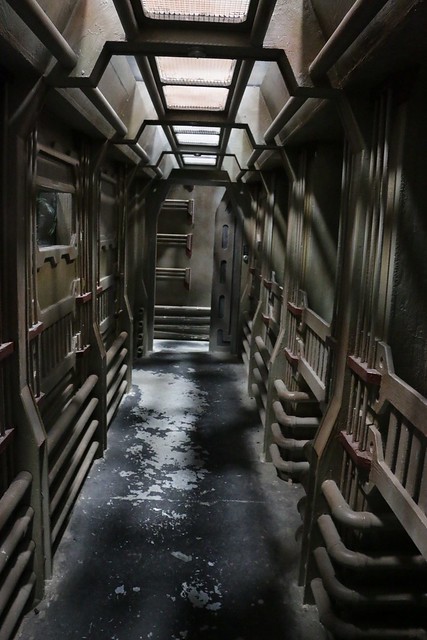 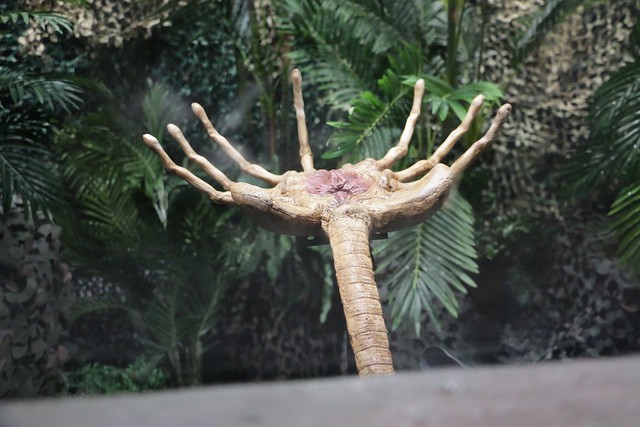 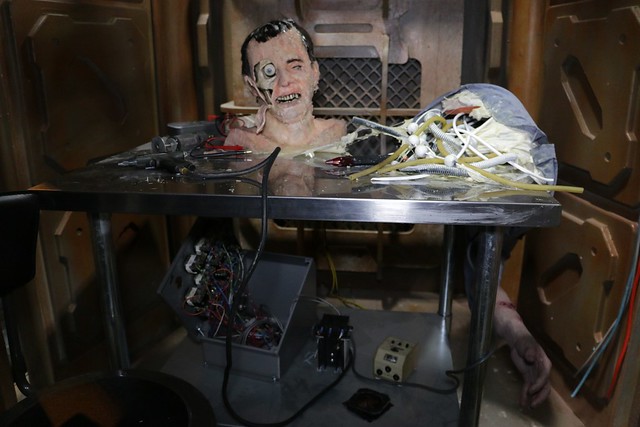 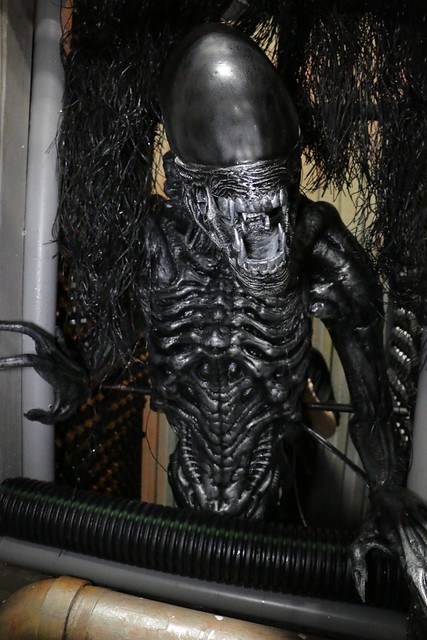 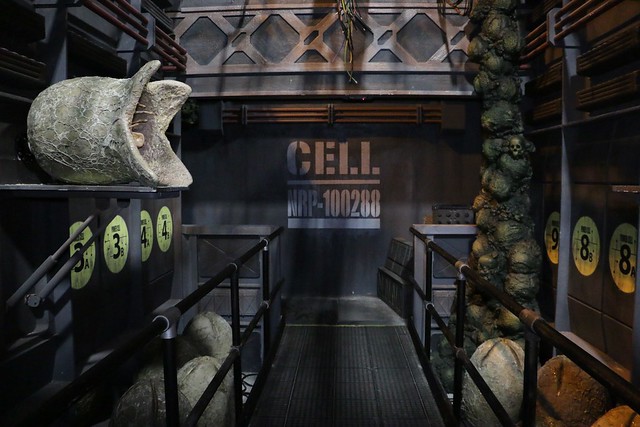 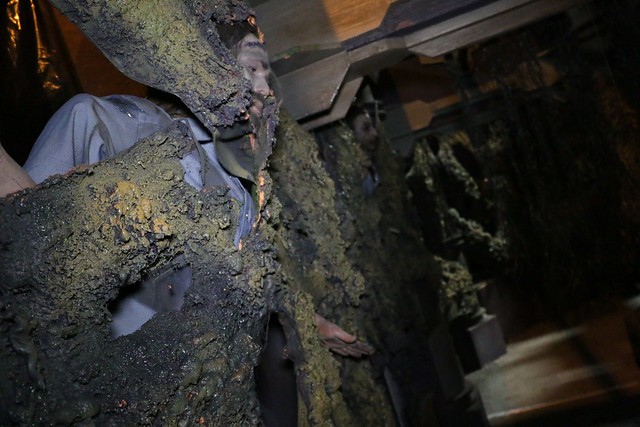 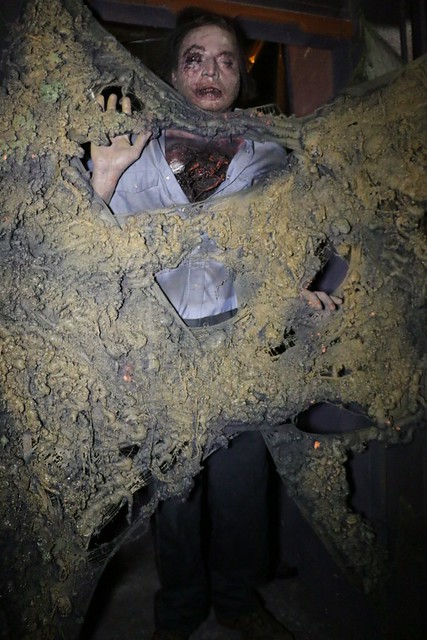 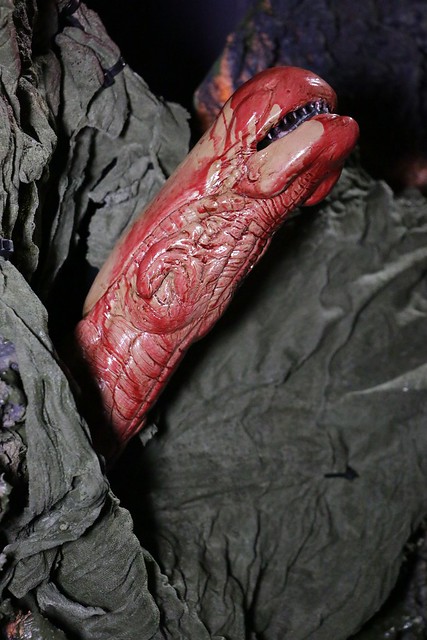 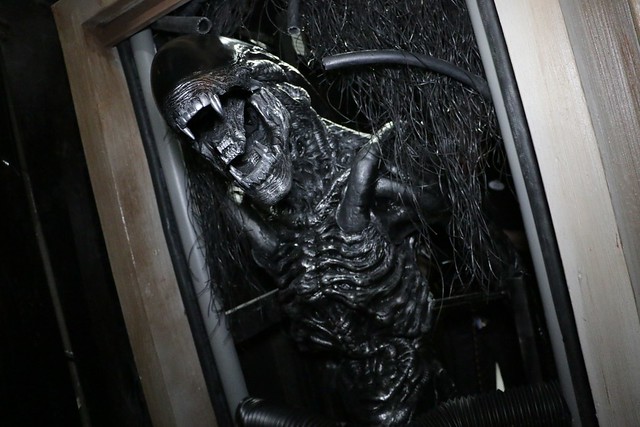 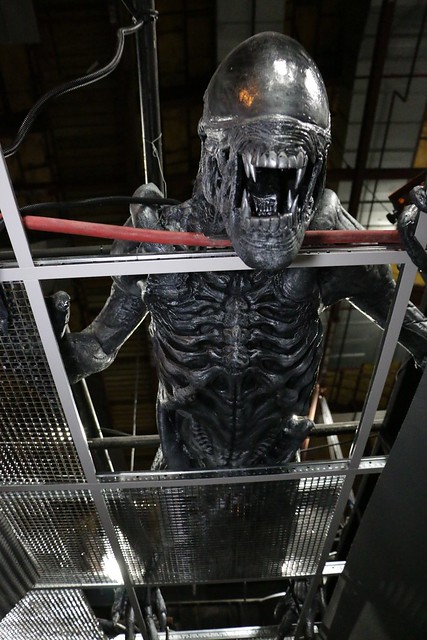 The Unmasking the Horror tours definitely give a behind-the-scenes peek at how Halloween Horror Nights haunted houses operate.

Mechanisms behind the Alien puppets are simple, but effective. The body sits on a swiveling bar, weighted for easy control by a performer behind. Different xenomorphs have different functions. They all can lunge forward and move their heads left and right, but some can thrust out the tiny mouth within their huge snarling mouth via pneumatics at the push of a button while others can spray mist. They are puppeteered via two mounted handles on a metal bar, each with a button at the top to control those actions. 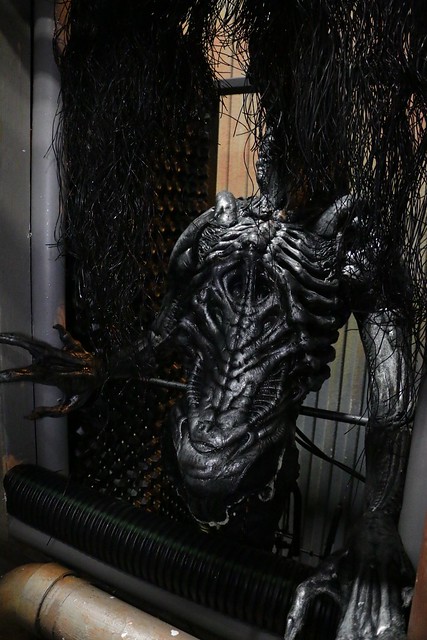 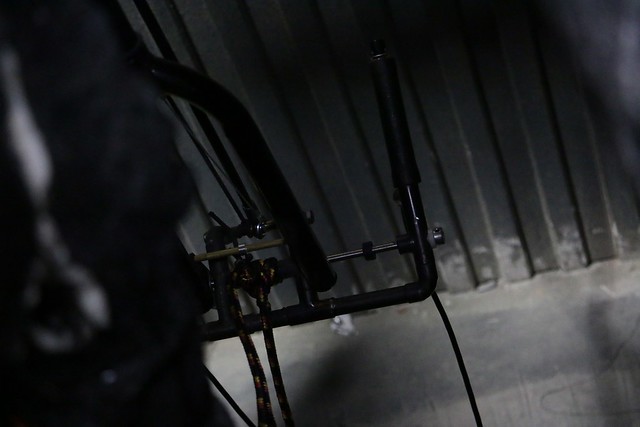 Ever wonder how animatronics are controlled? Some are certainly more elaborate than others. But when this Horror Nights maze called for a half-built android to move its eyeball around on a table, a simple solution was all that was needed. The animation is powered by a BooBox, a programmable controller from FrightProps that’s quite common in the haunt industry. It can be seen on the floor behind the animated head during the tour. 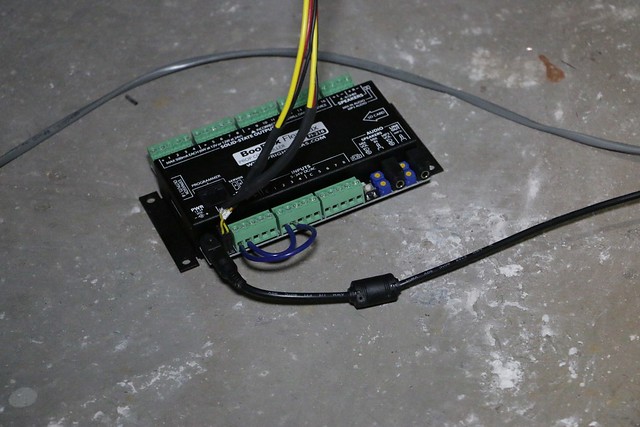 Check back to Outside the Magic soon for more Unmasking the Horror tour photos from Halloween Horror Nights 24 at Universal Orlando.

More photos from Alien vs Predator: