In one night celebrities of all kinds were shot, maimed or hung, zombies were kept in check, monsters roamed the streets of a ghost town, Houdini haunted and Elvira had a macabre circus – all at Knott’s Scary Farm for 2014.

With the Halloween season having more and more competition, Knott’s is trying some new things to stay ahead with its annual haunt, the original and first one at any theme park.
Two years ago saw the debut of “Trapped: Lock and Key” as a separate ticketed event within the bigger event. Trapped is back again this year with an all new script, but the theme of being “trapped” until the small group works out how to escape each room continues. 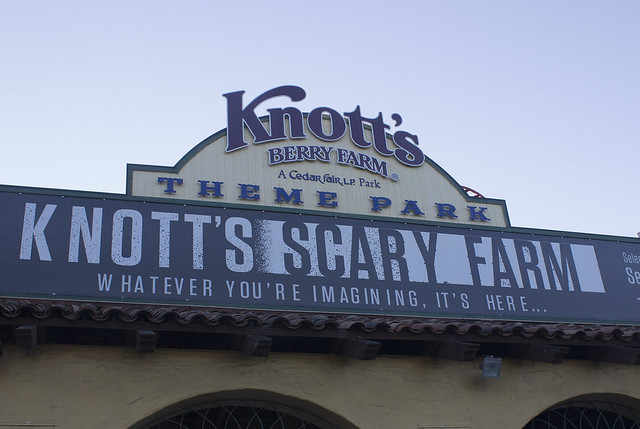 Last year saw the return of Elvira, Mistress of the Dark. This year the ageless wonder of darkness is back with a macabre circus called, “Elvira’s Big Top,” and their not just talking about her prominently displayed bosom. In the show, Elvira played host to several strange acts, one of which was a fairly gross sword swallower (gross being normal for this circus) act, and a contortionist who arrived on stage in a small, clear Plexiglas, box. She left the stage in the box too. All the acts were introduced by the Mistress of the Dark wearing a top hat and showing off her, um, attributes, with her usual slightly off-color hilarious jokes.

This year, Knott’s Scary Farm introduced a new concept called “Special Ops Infected.” The story is that zombies have invaded the Camp Snoopy area. A Special Ops Unit keeps a perimeter around the area and leads those with reservations into the area to “take out the zombies” and rescue trapped personnel. Entrance into the area is either from Station Alpha or Station Bravo, and the units take no more than 10 people as “enlistees” at a time. Once checked in, each “enlistee” is given a gun and instructed to only shoot at the zombies’ heads – rendering them unable to attack for a period of time. Yes, the zombies do come back to life.


Once inside, the patrol leaders lead the groups to perform certain functions at several outposts within the infected area, sometimes with bad results. Yep, zombies attack.
This is a really fun thing Knott’s is trying, and other than the occasional weapon’s malfunction, the patrol leaders were really into it, and the concept is a good one.

There are two new mazes this year; the first is “The Tooth Fairy.” The premise is that the nice Tooth Fairy has been captured and replace by a really twisted Tooth Fairy – one that haunts everyone with a tooth under their pillows. Some really bloody scenes in several dentist chairs are throughout the maze, as well as several young people hiding as best as they can in their beds from the wandering evil Tooth Fairy. A lot of blood and gore is throughout this scary maze, including two piles of stolen coins, spattered with blood.

The second new maze is “Voodoo.” This maze had one of the longest lines and deserves it. Not the usual walking through corridors and walls, this maze sends visitors into a swampy Deep South area where voodoo zombies and other creatures roam. There is a bloody sacrifice, and a trip through a mysterious swamp. It is, in my opinion, one of the best mazes in years in that it is not like all the others. The lighting is very well done in this maze, and the monsters clearly have roles to play other than just to jump out at you.

The Calico Mine Ride, even with its all-new show elements, is turned into “The Witch’s Keep” for the haunt. The overlay is kept in place for the regular park hours too. The overlay shows how a witch is trying to capture some mysterious energy and use it on all who dare to enter the mine. It is not too scary, and would be safe for kids too, unlike most of the mazes.

Other returning mazes include: Dominion of the Damned, Trick-or-Treat, Black Magic – featuring the mysterious appearance of Harry Houdini’s ghost, Forevermore – based on Edgar Allen Poe’s stories, Pinocchio Unstrung, and The Gunslinger’s Grave – where a dead gunslinger is inflicting his revenge on a corrupt town. 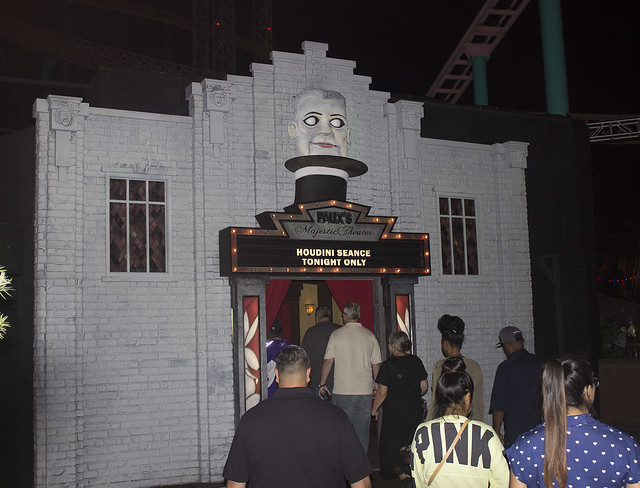 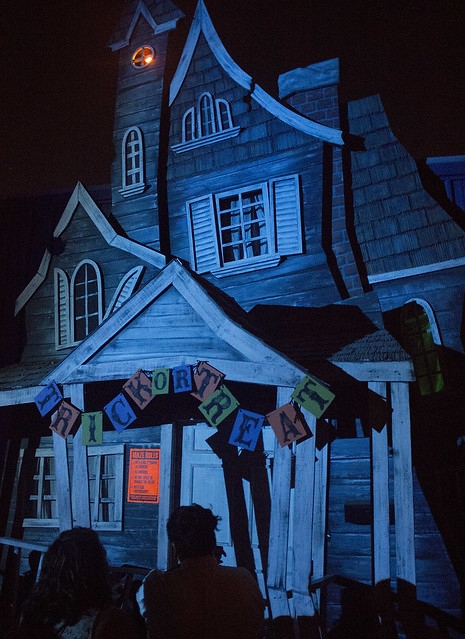 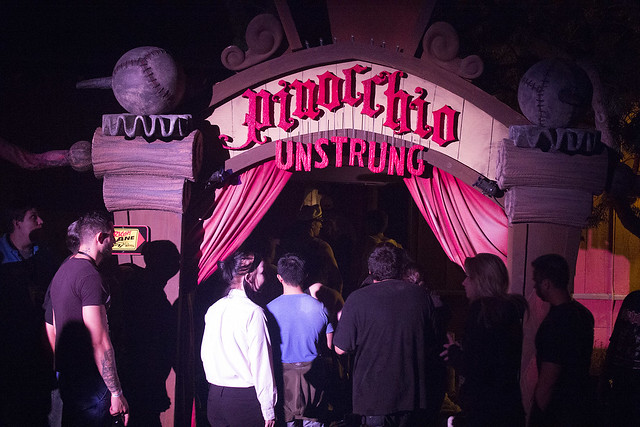 Of course, Knott’s Scary Farm would not be what it is without the annual Hanging. No celebrity, pop culture icon, or notorious news makers is left untouched in this annual irreverent stunt show. This year the Lawman and Hangman picked on “Frozen,” including parodies of two of its songs, and left no Disney stone unturned as they also spoofed its Marvel Unit’s “Agents of Shield” as well as some of the other Marvel characters and movies. Other newsmakers, such as Mayor Rob Ford, along with celebrities like Beyonce, were not spared in their search for someone to hang. This year, there was a double hanging, as the Lawman and the Hangman figured that two people both deserved hanging, the people hung this year were, WARNING, GIVING AWAY THE HANGING ENDING IS PUNISHABLE BY HANGING.

Video: Frozen parody in The Hanging at Knott’s Scary Farm 2014

Whoops, okay. There are also the usual monsters and other scary creatures wandering the streets, as well as a gypsy camp where, for a small fee, one can get their fortune’s read.
Overall impressions: the new additions were great. The lighting in “Voodoo” and “The Tooth Fairy” really worked nicely; they were not just dark mazes like the others seem to be. Knott’s Scary Farm should take that lighting approach in the other mazes to make the set pieces work nicer, and make sure that all the creatures in the mazes have roles to play, rather than just all wandering around trying to pop up from around corners.

Special Ops Infected is, in a word, a brilliant addition. This role-playing experience is, in my opinion, a must-see and must-do for anyone attending the haunt. Knott’s should look and learn from this, bring it back next year, and maybe even expand it for next year perhaps something with a Wild West theme.

The Skeleton Key rooms in some of the mazes are also a continuing nice addition, for those that get them.

All in all, Knott’s Scary Farm is stepping up its game, and will continue to do so for years to come.