Elvira is back, but there is also a new infection “Trapped” at Knott’s Scary Farm for 2014.

Yes, the Mistress of the Dark will be appearing in the Charles M. Schulz Theatre at Knott’s Scary Farm again this year with her brand of off beat macabre humor. This is the second year for Elvira in this return to bring a little levity to the haunted goings ons at the Farm. This year’s all-new show “Elvira’s Big Top” will feature the Academy of Villains.

Jeff Tucker, creative director at Knott’s Berry Farm, emceed the preview presentation in the theatre where, as only Knott’s can do, a humor filled show about what would be featured this year at the haunt was unveiled to the media and a selected group of season pass holders.

After the introduction of Elvira, and before Jeff could get started, he was interrupted by the Hanging Judge, who guaranteed that someone would be hung in Calico Town Square. The judge would not say who it would be, though several names were tossed out for consideration of putting into the hangman’s noose – even Justin Bieber. Though the Judge said Bieber had been hung before and refused to stay dead.

Jeff then talked about the Skeleton Keys, a recent introduction. The keys will give Scary Farm attendees the ability to go to the front of the line for all the mazes as well as give them access to “special rooms” inside most of the mazes.

He announced the returning mazes for 2014 including: Trick or Treat, with the Witch’s House, Dominion of the Damned, Forevermore (based on Edgar Allen Poe’s stories), Pinocchio Unstrung, Black Magic – the story of Houdini – and The Gunslinger’s Grave. 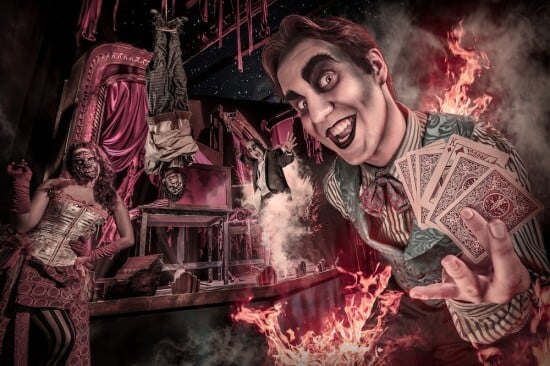 According to Timothy “Gus” Krueger, who designed the maze, this year a new addition will put those going through the maze in the middle of a gunfight for the finale.

Tucker also announced an overlay for the Calico Mine Tray Ride called, The Witch’s Keep.

New mazes are: Voodoo, which was designed by Brooke Walters. “You’re going to be in a bayou swamp and things are going to rise up out of it,” she said. Adding that this maze will feature several “choose your own path” options in the maze. “People will have a different experience each time.”

Next up was “The Tooth Fairy,” designed by Daniel Miller. “I wasn’t sure how to approach this idea until I went to the dentist and had to have some cavities drilled out,” he said. It will be a tour of the Tooth Fairy’s realm, but not a sugarcoated tour.

“Trapped” is an all-new version this year. Its sub-titled “Lock and Key. According to Timothy “Gus” Krueger, the assistant designer for the maze combined with mini-shows, “I want you to suffer and be miserable so that you will have the most horrifying miserable experience that you will hate me when you escape,” he said. Krueger worked with original designer Jeff Tucker on this year’s maze. “It’s a maze and a series of terrifying shows,” said Tucker.

Knott’s says Trapped is not for the squeamish as the challenges are darker and more terrifying than any that have come before. (An additional fee and reservation are required to participate.) 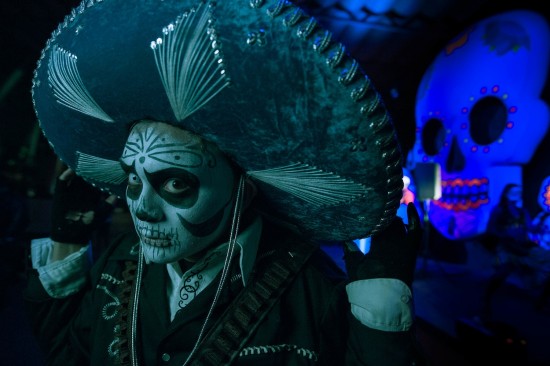 Next, Tucker opened a box containing a surprise announcement, a Knott’s Scary Farm Season Pass. This is a first for the Farm. Tucker said it would be available in limited numbers for existing season ticketholders only. The pass would cost $65, and would allow the holder unlimited access to all the Scary Farm dates – with no blackout dates. It is on sale now online at Knott’s website.

Then the lights went out and a siren sounded as a Special Ops unit dropped into the theater. It was Knott’s Scary Farm’s way of announcing a brand new interactive experience called, “Special Ops Infected.” 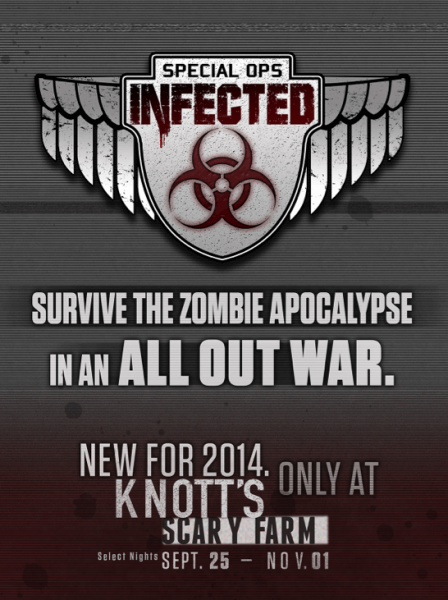 Jon Cooke, a long time Scary Farm monster, and now a designer explained that those who want to participate would become part of 12-person squads who have to complete one of two obstacle courses that would be set up in the Camp Snoopy area of the park. Participants would have also have to shoot Zombies for points, and avoid losing points to Zombies while their squad completes the course.

“There will be limited reservations and a stand-by line,” said Cooke, who added that the decorations for this would be taken down each night, so that the area remains kid-friendly during the day for regular park visitors.

Infected is the first of its kind in North America and will use specially designed laser guns to fend off zombies and complete various missions before time runs out. If zombies drag their bodies too close, the un-infected’s guns temporarily deactivate. The experience integrates interactive gaming technology with an immersive mountainous landscape through a variety of wilderness terrains, including barrel bridges, through the dark caverns, and through mysterious backwoods across six acres.