As “Guardians of the Galaxy” hits theaters today, Marvel continues to be among the biggest names in entertainment. When the summer season ends, two Marvel TV shows will take the air waves continuing to make connections to its vast cinematic universe.

“Agents of SHIELD” will return for a second season with its namesake organization (spoiler alert!) in shambles. Coulson is now assigned as its director, ready to rebuild with his team. Skye, May, Fitz, and Simmons are coming back, as is Ward whose alliance is very much up in the air. Adding to the mix in season 2 will be Lucy Lawless as a SHIELD agent as well as the inclusion of Marvel character Mockingbird.

At San Diego Comic-Con last week, I sat down with the cast and creators of “Agents of SHIELD” to discuss how the show can stay relevant and exciting even when movie stars like Samuel L. Jackson aren’t making appearances along with a bit about what’s in store for the new season. Interviews included in the video below are with Clark Gregg (‘Phil Coulson’), Brett Dalton (‘Grant Ward’), Chloe Bennet (‘Skye’), Iain de Caestecker (‘Leo Fitz’), Elizabeth Henstridge (‘Jemma Simmons’), Jeph Loeb (EP), and Jeffrey Bell (EP).

Before the interviews, all kinds of antics broke out on the press line: 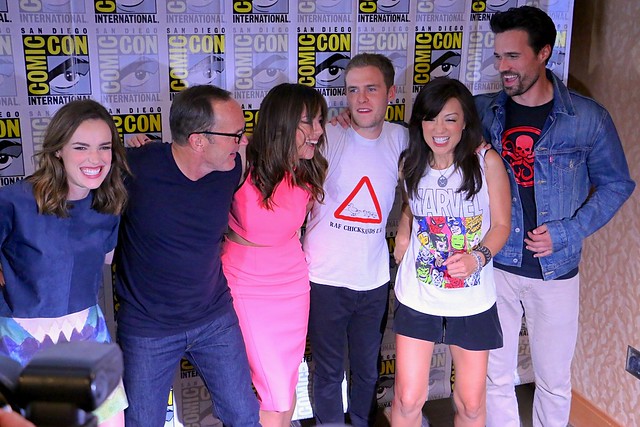 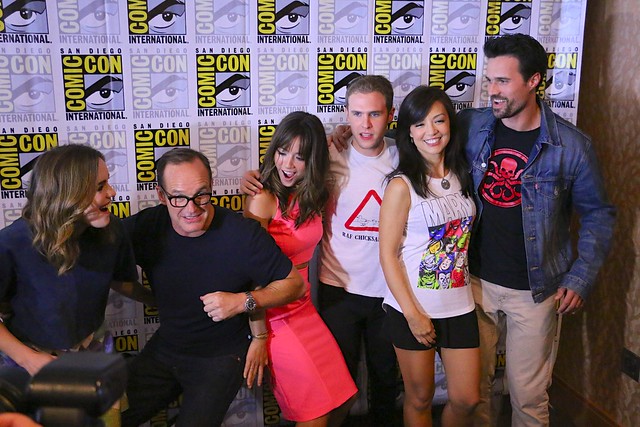 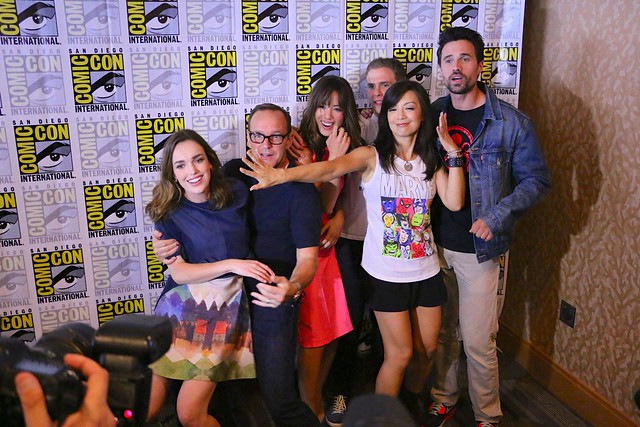 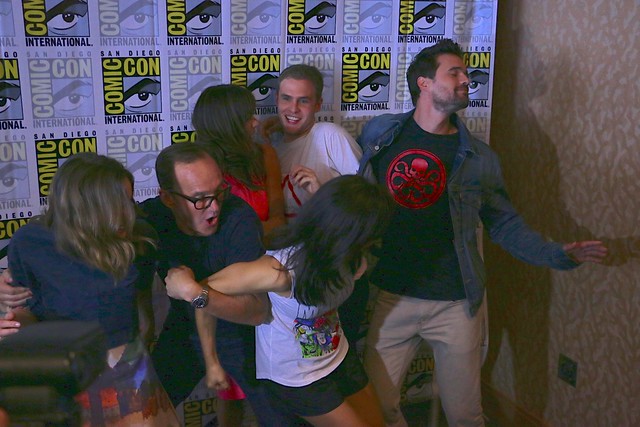 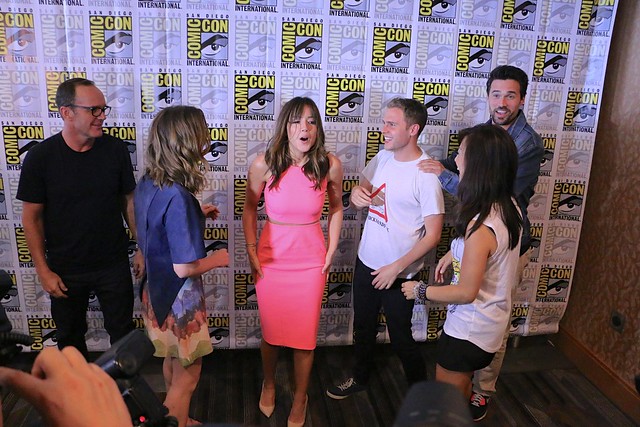 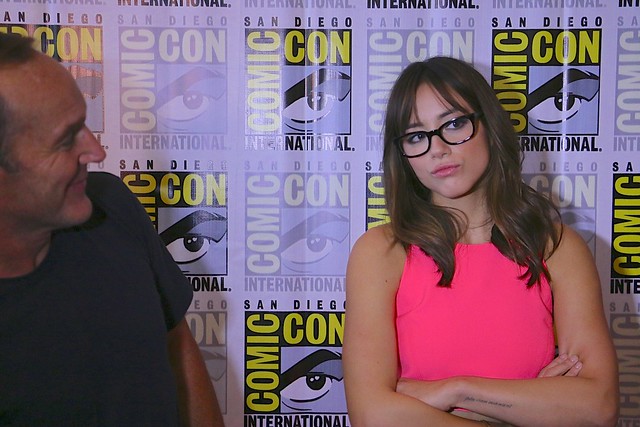 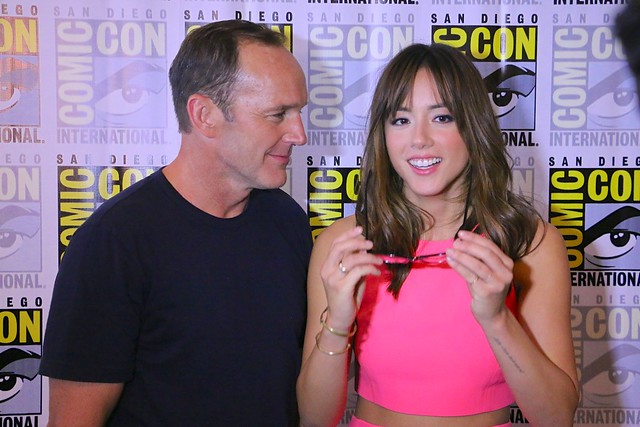 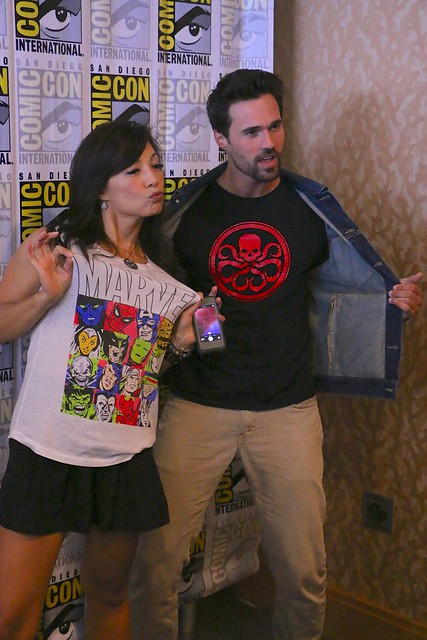 Newcomer to the Marvel TV scene will be “Agent Carter,” being developed after the success of the Marvel One Shot short starring Hayley Atwell. She’s back in the title role of her new series, a spy thriller set in New York during the Cold War era. Though only one episode has been written and shot so far, this show’s future success will likely lie in its simplicity over “SHIELD,” not following a whole team of agents but rather just one talented female lead. Atwell and the show’s writers and producer speak about how they have turned the “Captain America” character into a leading lady in the video interviews below. 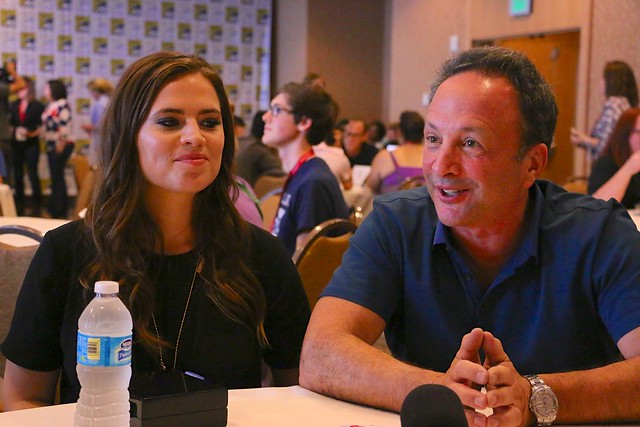 More photos of the Agents of SHIELD and Agent Carter cast and creators at SDCC 2014:

Comments Off on Interviews: “Agents of SHIELD” and “Agent Carter” cast and creators talk Marvel TV at San Diego Comic-Con 2014