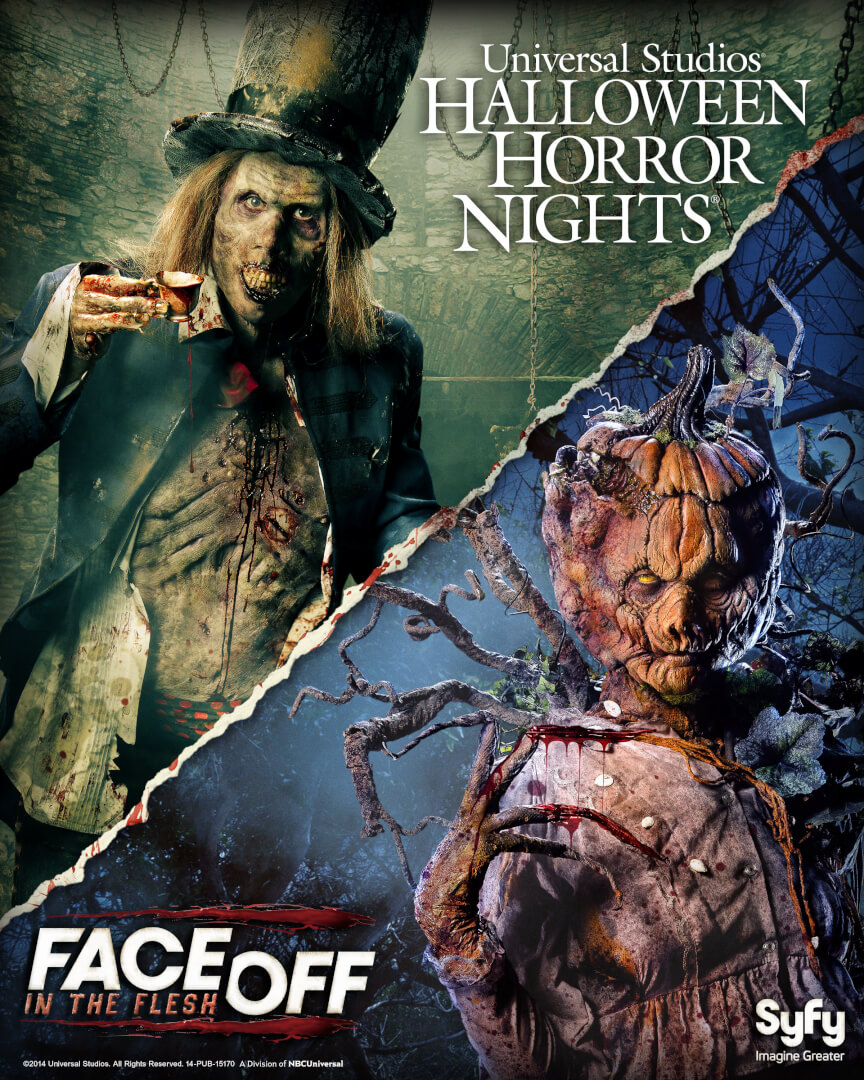 The most twisted and gruesome character creations featured on Syfy’s hit competition series “Face Off” will be live and “In the Flesh” at both Universal Orlando Resort and Universal Studios Hollywood’s Halloween Horror Nights 2014 event.

Creatures will surround guests on both coasts as the visions of some of the most talented up-and-coming make-up artists’ from the show are brought to life.

Universal Orlando’s Halloween Horror Nights will feature a scare zone with 10 different character creations inspired by the Syfy series, including a look designed by season 5 “Face Off” winner and Universal Orlando make-up artist, Laura Tyler. The characters will inhabit five unique and immersive environments within the scare zone, from eerie scarecrows that go to great lengths to protect a spine- chilling farmland to ghoulish brutes that haunt dilapidated castle ruins. “The gruesome creatures imagined on Face Off are the perfect fit for the streets of Universal Orlando’s Halloween Horror Nights,” said Michael Aiello, Director of Entertainment – Creative Development, Universal Orlando Resort. “Our goal is to bring to life the macabre artistry displayed in the characters seen week after week. We are also very excited to be featured in a season 7 episode of Face Off, and to include that episode’s winning makeup in the maze. For our guests, I know it will be a uniquely terrifying opportunity to come face to face with these creations for the very first time now “In the Flesh.”

Universal Studios Hollywood will feature a new maze, “Face Off: In the Flesh,” located in the park’s House of Horrors, recreating the morbidly disturbing inventions masterminded by visionary make-up special effects artists over the course of the show’s past six seasons. 22 original “Face Off” designs – from human-insect hybrids to horror villains, ancient mummies and zombies – will cascade throughout the dark corridors of the terrifying new maze bringing to life multiple incarnations of these select characters and adding to the cast of characters designed to scare the life out of every guest. “Face Off: In the Flesh” will also feature new sounds from acclaimed electro house artist “Figure.”

“‘Face Off’s’ inspiration to create original movie-quality creatures makes for very compelling television,” said John Murdy, Universal Studios Hollywood’s Creative Director for and Executive Producer of “Halloween Horror Nights.” Collaborating with the show’s creative team, however, gave us a unique way to extend the life of these exceptional characters that make-up artists have poured blood, sweat and tears into creating. We’re excited to put these incredible works of art to the test and see just how scared our guests will become when they are face to face with live versions of these nightmarish characters.”

Here are some of the characters that could appear in the maze and/or scare zone: Season 7 of “Face Off” premieres on Syfy on July 22. The series will feature Universal Studios Hollywood for an episode airing September 9, in which the artists must create an original horror villain inspired by evocative titles and vivid graphics from a movie poster. The winning makeup from this challenge will be featured at Halloween Horror Nights 2014.