Move over green slime, there’s a new green star of Nickelodeon kicking shell at Nick Hotel. Actually, there are four: Leonardo, Michelangelo, Donatello, and Raphael. Together they are the lean, mean, incredible team known as the Teenage Mutant Ninja Turtles, now delivering even more entertainment at the unique Orlando resort.

Nick Hotel has begun the “Summer of Shell” adding more TMNT fun than ever before, spanning decades of turtle power.

Over the past three days, Nick Hotel hosted TMNT Retro Weekend featuring opportunities to mingle with the original voice cast of the “Teenage Mutant Ninja Turtles” cartoon that brought the franchise to worldwide fame back in the late ’80s and early ’90s. In attendance were voice actors Cam Clarke (Leonardo, Rocksteady), Townsend Coleman (Michelangelo), Barry Gordon (Donatello, Bebop) and Rob Paulsen (Raphael) – who also currently voices Donatello in the newest incarnation of the show on Nickelodeon. 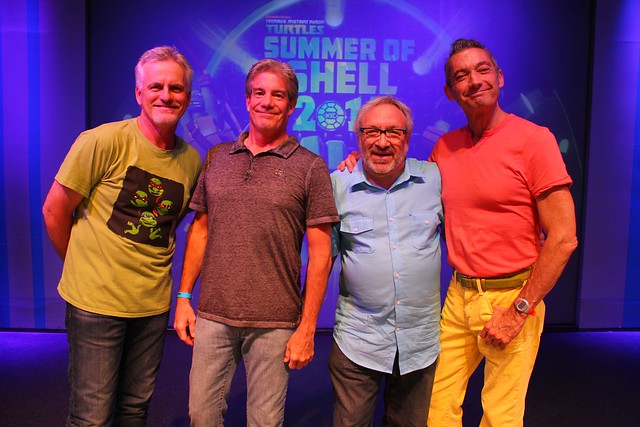 During special Q&A sessions, the four voice actors reminisced about the early days of the Ninja Turtles phenomenon, appreciation of their fans, and offering up plenty of samples of their voice talents too.

Watch one of the highly entertaining sessions in the video below, followed by an interview with the TMNT voices – one I was more than happy to conduct, being a huge fan of the show since I was very young when it initially aired. (I even got pulled in front of my own camera when Clarke and Gordon became excited about my Bebop and Rocksteady shirt.)

The group was excited to meet with fans young and old, taking pictures and signing autographs throughout the special weekend. 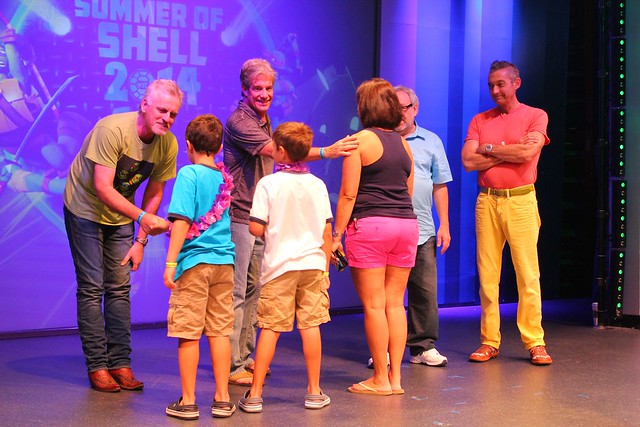 Though TMNT Retro Weekend is over, the Summer of Shell continues at Nick Hotel as the Teenage Mutant Ninja Turtles continue to meet and greet with guests on select days. Though these ninja teens have been appearing at the hotel since 2012, they’ve now added a fifth familiar face to the group: April O’Neil. 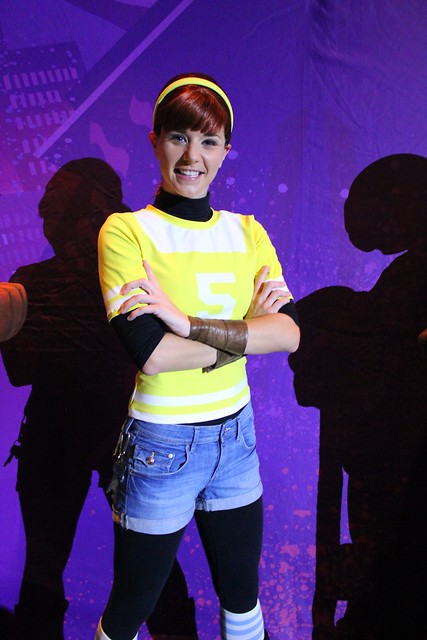 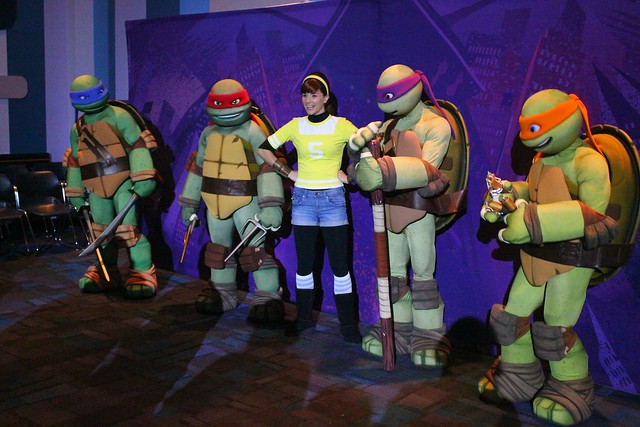 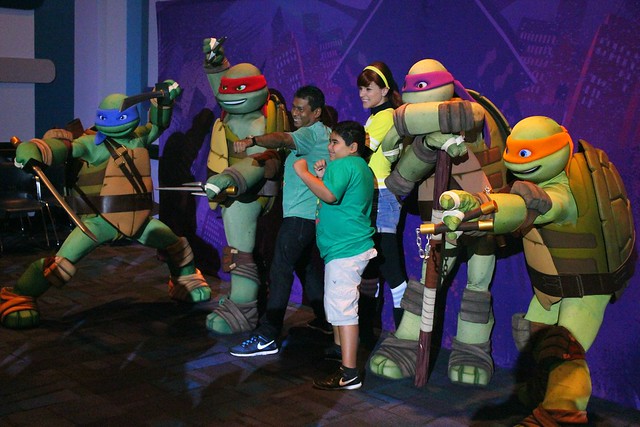 But the good guys are always alert, watching out for Shredder’s evil gang. Foot Soldiers have now been spotting roaming Nick Hotel as well. 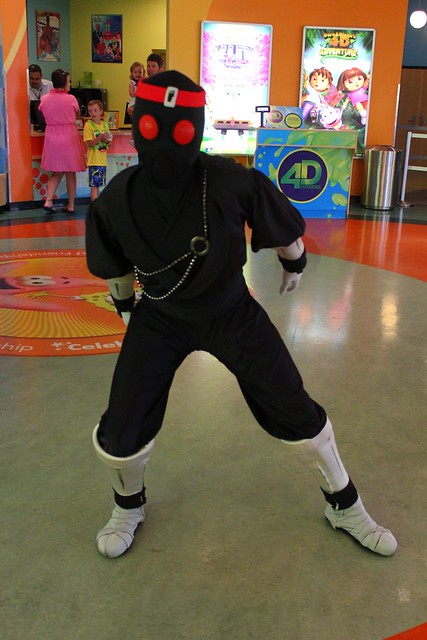 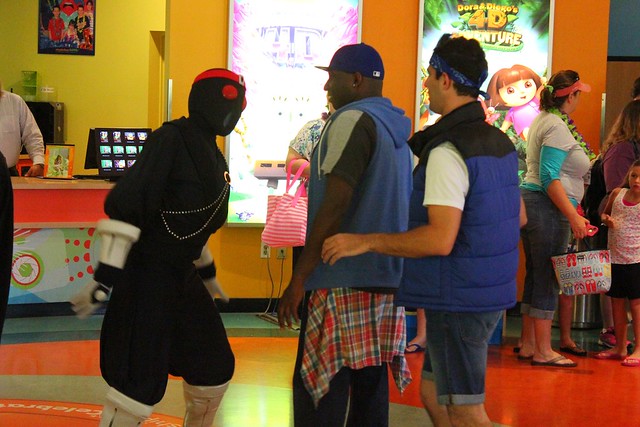 Part of the Summer of Shell is the addition of a poolside show called Turtle Power, in which April O’Neil and the Turtles fend off the Foot Clan while also hosting a dance party that includes a martial arts-fueled live version of the show’s theme song.

Unfortunately when it rains, which is almost daily in Florida during the summer, the show is cancelled. It’s only scheduled to be performed once a day on Sundays, Wednesdays, and Fridays, so it’s tough to catch.

As part of a special press event to kick off TMNT Retro Weekend, Nick Hotel performed an abridged version of the Turtle Power show indoors, featuring only the intro theme song and dance party, seen in the video below. 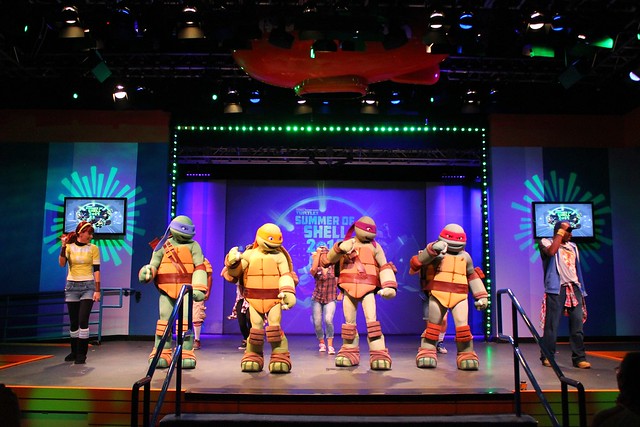 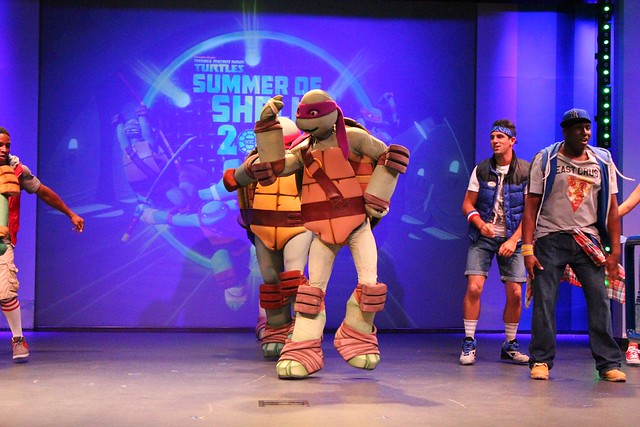 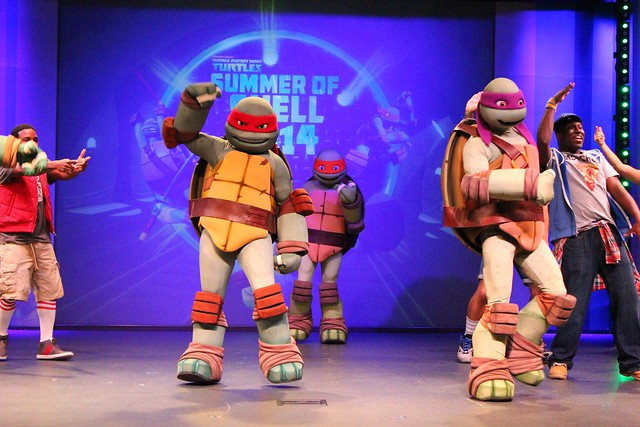 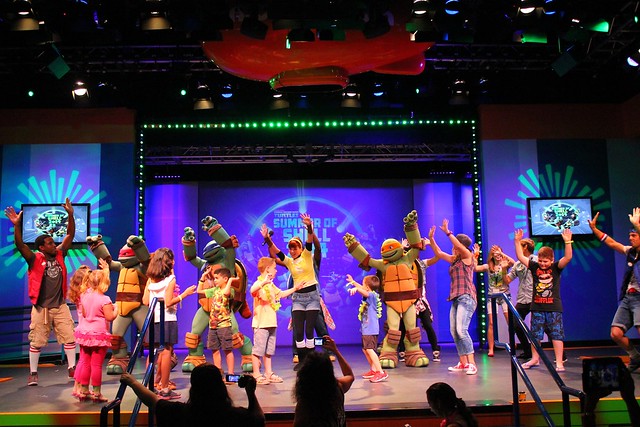 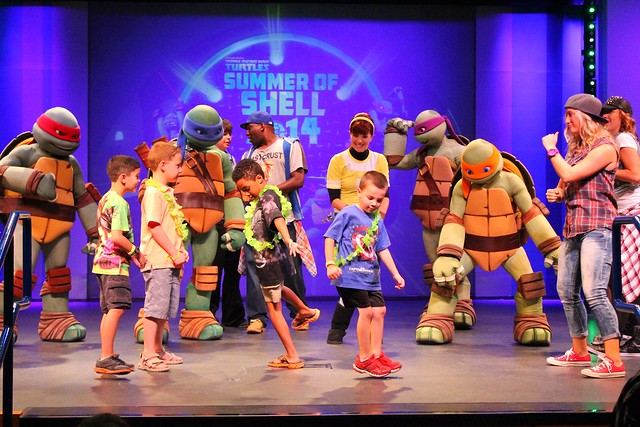 I made a second attempt to see the show yesterday, but was once again rained out. Ninja Turtles fans definitely need to plan ahead to make the most out of a trip to Nick Hotel, knowing that not seeing the new show is a very real possibility. Likewise, the meet-and-greets only happen on select days as well.

This weekend Nick Hotel also debuted their new Teenage Mutant Ninja Turtles themed family suites. There are 10 available in the hotel now with plans to add a few more soon. The rooms are not heavily themed. Only a single wall in the kids’ room opposite bunk beds features a large mural featuring the Turtles. The rest of the suite is without any TMNT details. 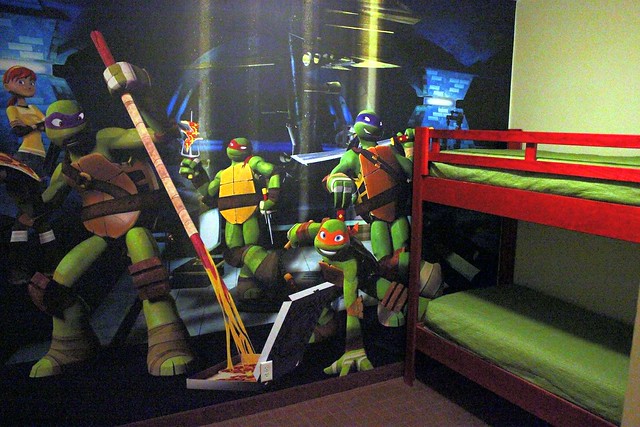 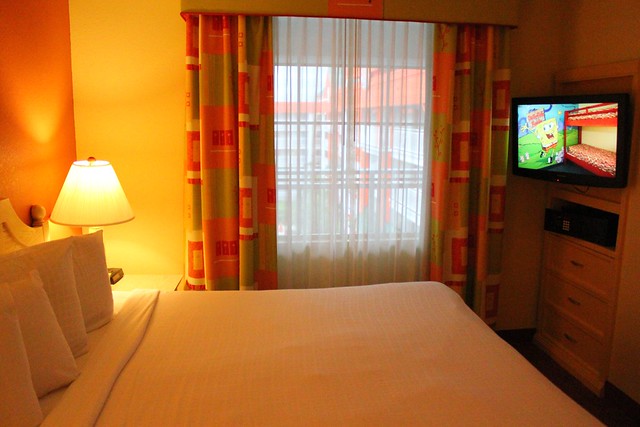 The suites are comfortable enough, complete with living area, kitchenette, and ample bathroom space. Beds are cushy and offer a good night’s sleep. But much like TMNT Retro Weekend was a call back to the ’90s, the free Wi-Fi feels like one as well, slower than dial-up and barely useable. Cell phone connections are recommended for anyone wanting to get online while at the resort.

For the Summer of Shell, they’ve added a few huge Turtles touches to the pool area too. Nick Hotel still has even more TMNT fun in store. In late July, a Turtles-themed laser maze will debut in the hotel, followed by a record-breaking attempt at drawing the most people dressed as Ninja Turtles in one place on August 9.

Though the Teenage Mutant Ninja Turtles have appeared at Disney’s theme parks in the past, the only place to find them today is at Nick Hotel in Orlando and there’s plenty for fans of the long-running franchise to enjoy. TMNT Retro Weekend was a particularly special event for the many Turtles fans who flocked to Nick Hotel to relive their childhoods and share it with today’s kids. There’s just one word to summarize it all: Cowabunga! (Or is it booyakasha?)