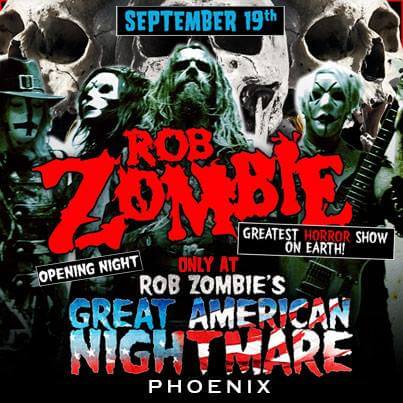 Rob Zombie’s Great American Nightmare is back for 2014, this time moving from California to Arizona starting September 19 with three haunted attractions and a new concert series. Three haunted attractions will be included: Lords of Salem in Total Blackout, Captain Spaulding’s Clown School and The Devil’s Rejects.

Also included will be the midway called Bloody Boulevard with characters roaming through, plus food, drinks, and other entertainment. And on opening night, Rob Zombie will be playing a concert to kick off the experience.

2013 was the first year for Rob Zombie’s Great American Nightmare, bringing the horror director / musician’s own obscene tastes to the haunt scene, grossing out patrons will trying to scare them. Reviews were extremely mixed with the event clearly showing its infancy.

This year, they’re making adjustments, including ditching the raunchy El Superbeasto 3D house in favor of one based on “House of 1,000 Corpses” and expanding upon “The Devil’s Rejects” beyond the pitch black “Lords of Salem” idea.

More information about Rob Zombie’s Great American Nightmare 2014 can be found on their web site.