Drinks are definitely a focus of dining in Diagon Alley with multiple locations available to purchase the same unique beverages. But much like the original Hogsmeade Village side of the Wizarding World, there is just one main restaurant in the new area, The Leaky Cauldron.

In addition to the Three Broomsticks restaurant already built at Universal, The Leaky Cauldron is the other iconic establishment seen in the “Harry Potter” films. It was a natural choice for Universal to build in Diagon Alley and they’ve done so accurately to match its look and feel. This new restaurant is actually somewhat less interesting than its Hogsmeade counterpart. Aside from its big cracked cauldron, an animated wanted poster of Sirius Black, and some scattered pictures and animal head sculpts, there isn’t much flair to it. It’s a comfortable place to eat with ample seating, but leaves little to look at while dining. 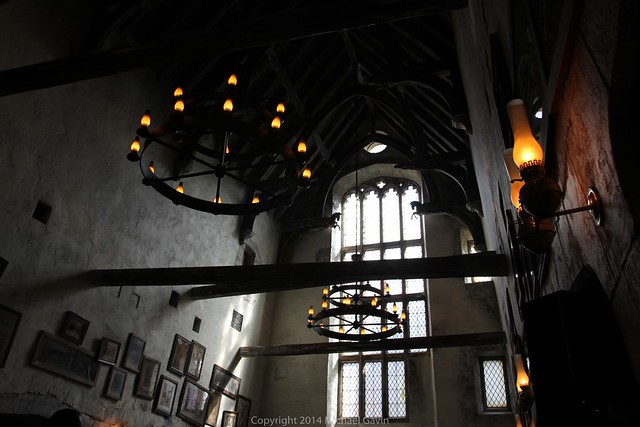 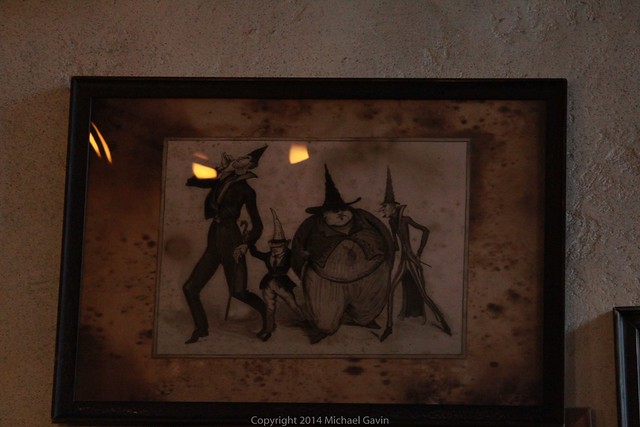 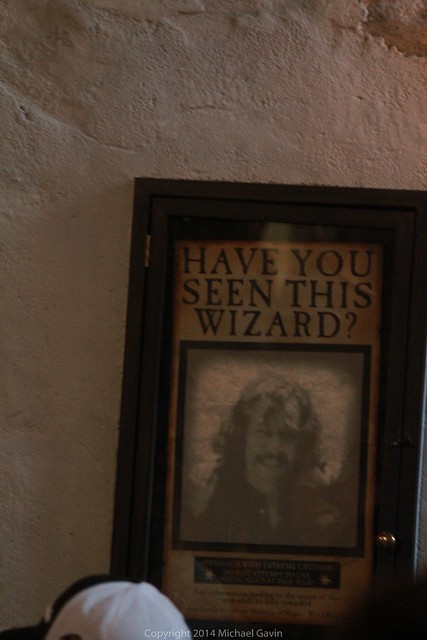 The food is inspired by British fare. There’s fish and chips, bangers and mash, scotch eggs, guiness stew, fisherman’s pie, toad in the hole, and more. None of the cuisine jumps out as outstanding, but it’s all relatively good, about on par with the food at Three Broomsticks. For those with a huge appetite or desire to share, there’s the Ploughman’s platter packed with cheeses and a sampling of other menu items. 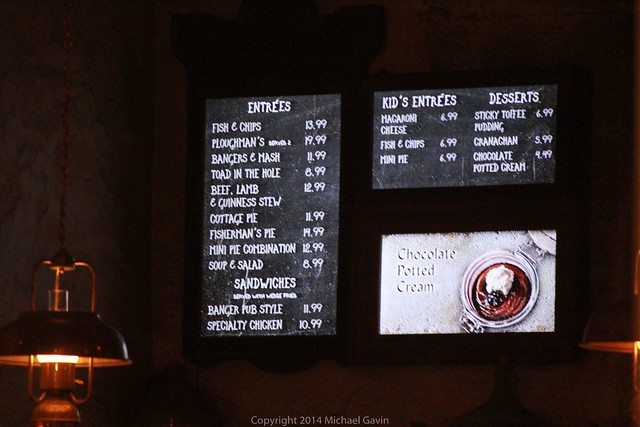 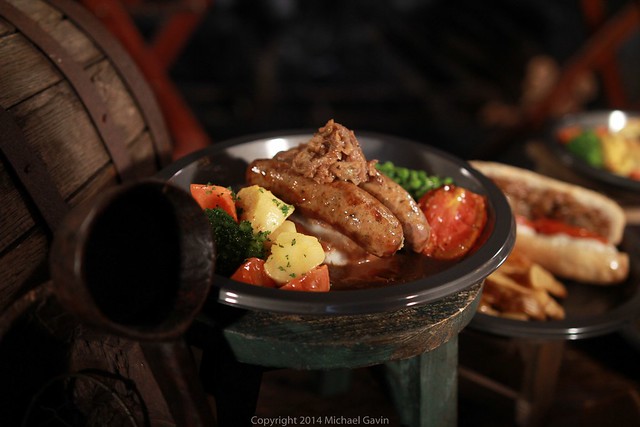 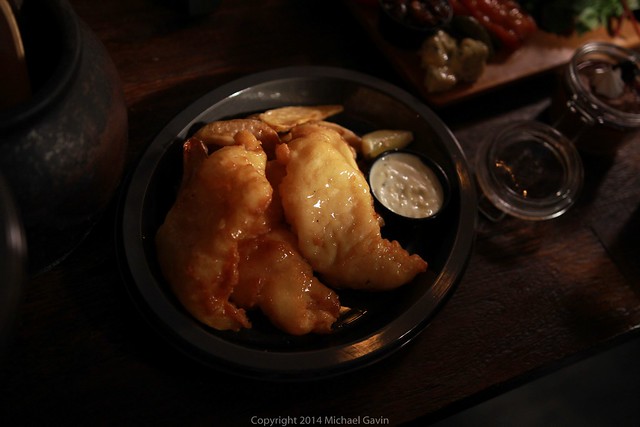 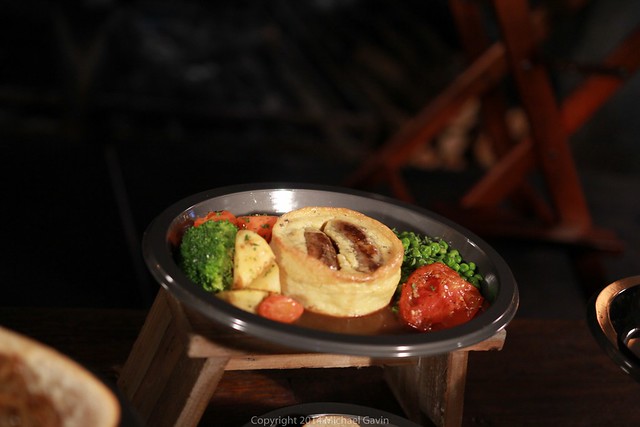 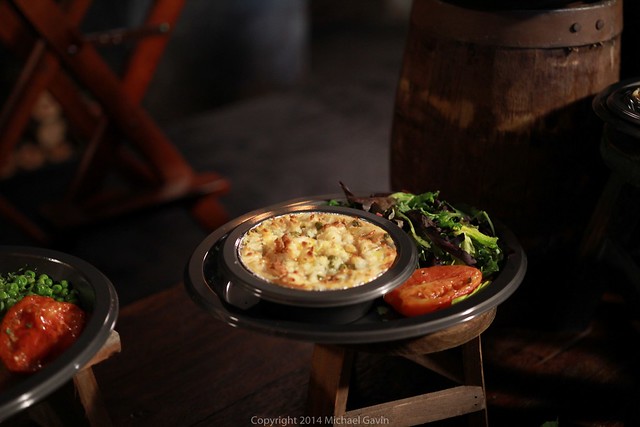 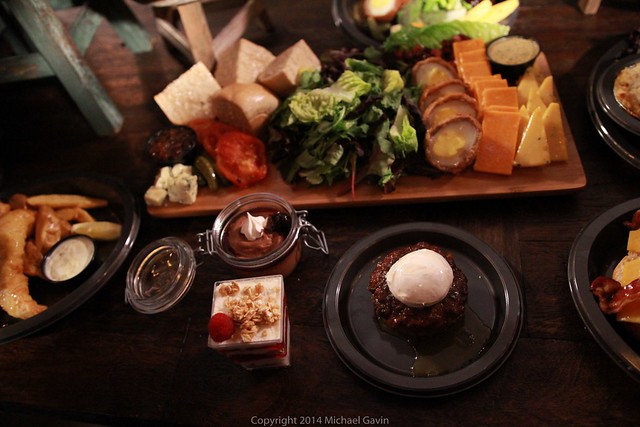 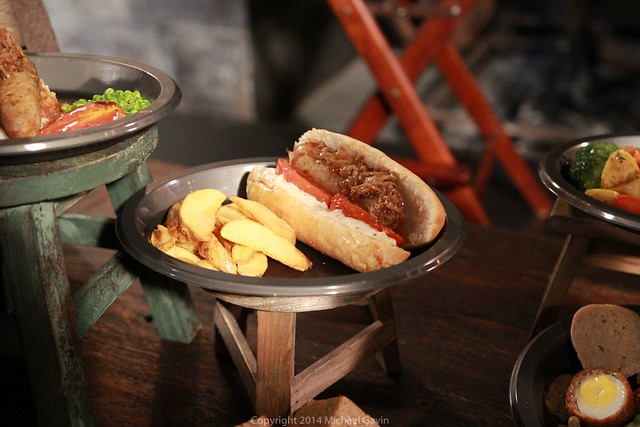 Adding to Butterbeer and Pumpkin Juice, a few new signature drinks are available: Tongue Tying Lemon Squash, Otter’s Fishy Orange Juice and Fishy Green Ale. Fishy Green Ale is the standout star, available at several locations throughout Diagon Alley. Despite the odd name, there’s no fish involved in this drink, instead packed with bold flavors of mint tea and boba-style balls (“fish eggs”) that burst with blueberry blasts. It’s quite good. The Tongue Tying Lemon Squash is a rather refreshing lemonade style drink and not too tart, again despite the name. 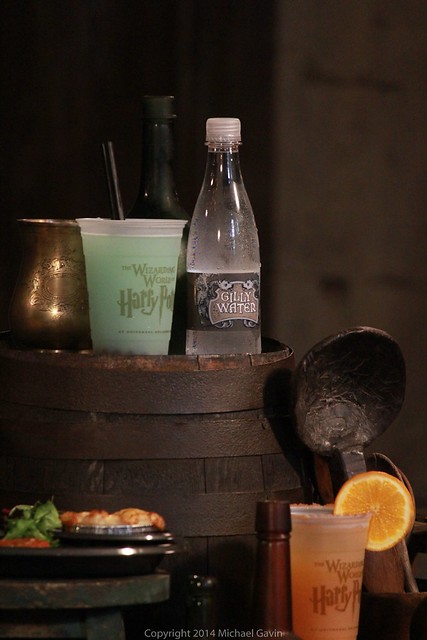 Those looking to satisfy their sweet tooth needn’t venture further than Florean Fortescue’s Ice-Cream Parlour, home of the new Butterbeer ice cream. This delicious dessert is the only soft serve option in the new location, extremely dense and perfectly sweet. It’s arguably better than the Butterbeer drinks, frozen or regular. 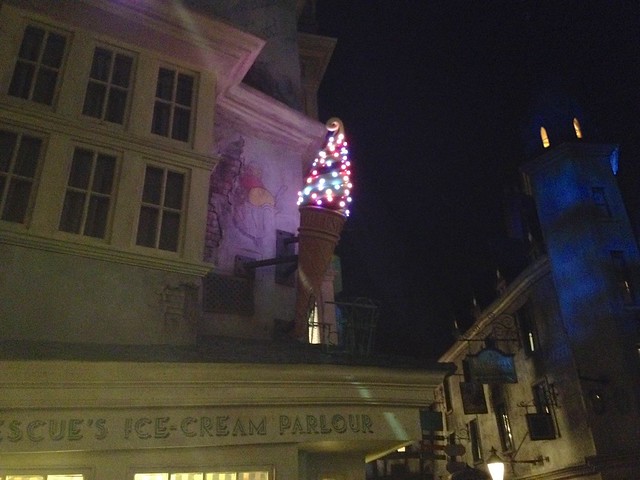 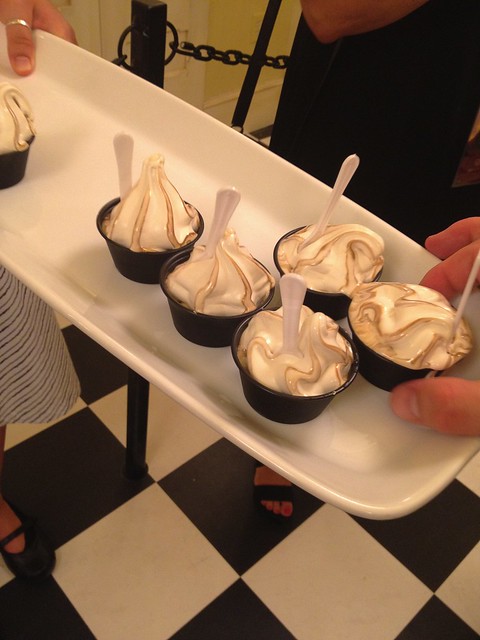 Other interesting flavors sure to be popular are Chocolate Chili (which packs a late kick) and Sticky Toffee Pudding. 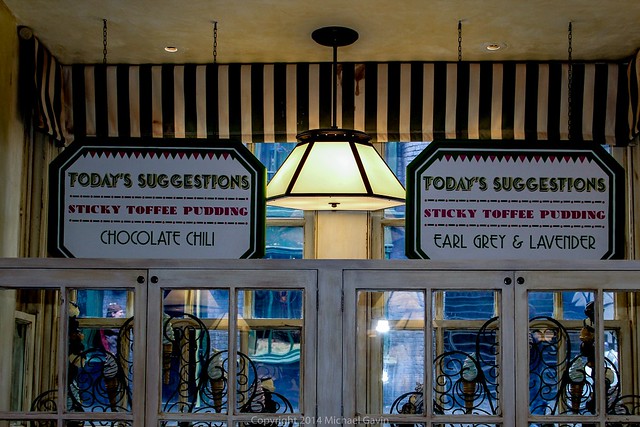 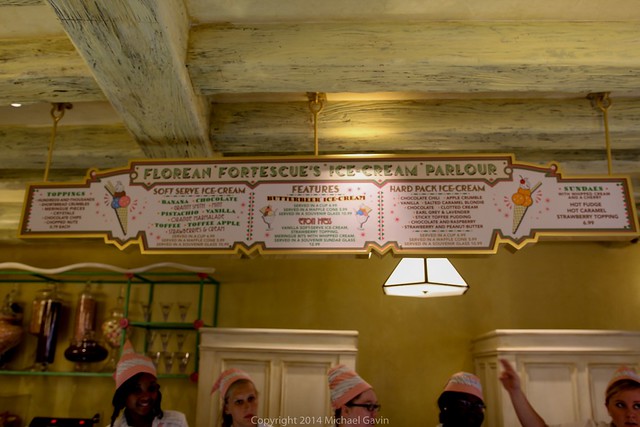 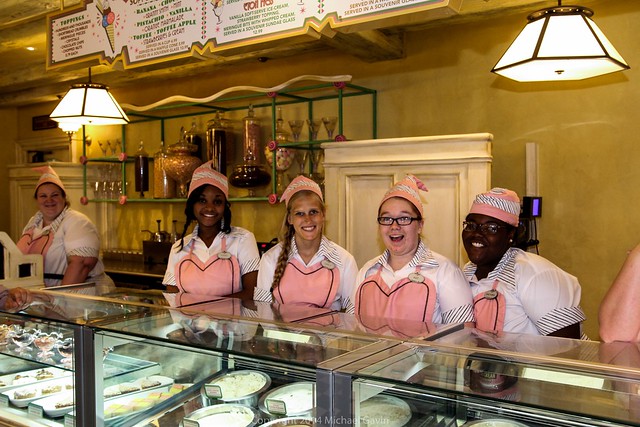 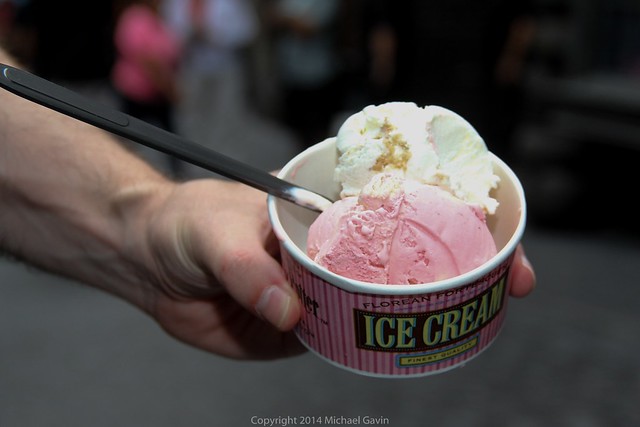 The decor is minimal inside the parlour, with little else beyond a few animated displays in the windows – unusual for the highly-detailed Diagon Alley. (It’s possible this area wasn’t finished in time for the recent press preview.) 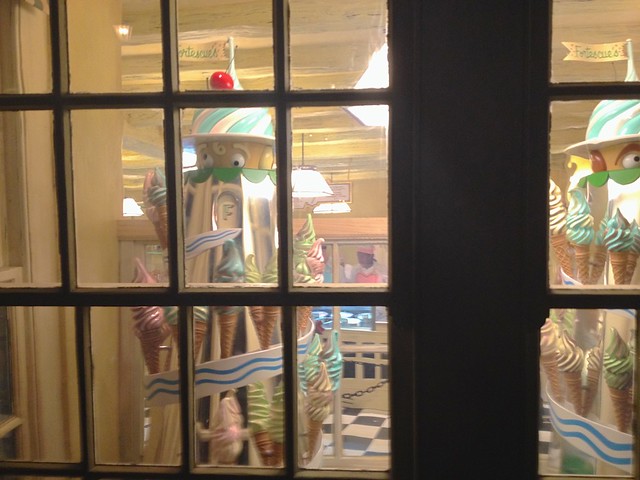 Universal’s latest brilliant way to separate Harry Potter fans from their money is called Gillywater. In the Potterverse, Gillywater is a drink combining Gillyweed (a magical plant) and water. With the magic toned down for Muggles, Diagon Alley serves Gillywater with a variety of “elixers” mixed together. As the story goes, each elixer offers different magical abilities, such as fire protection or inducing euphoria. 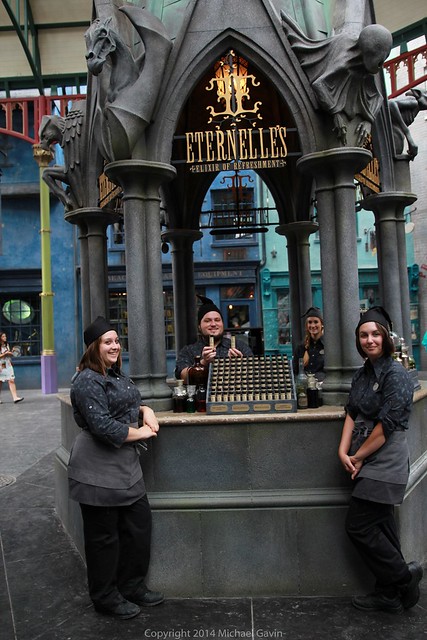 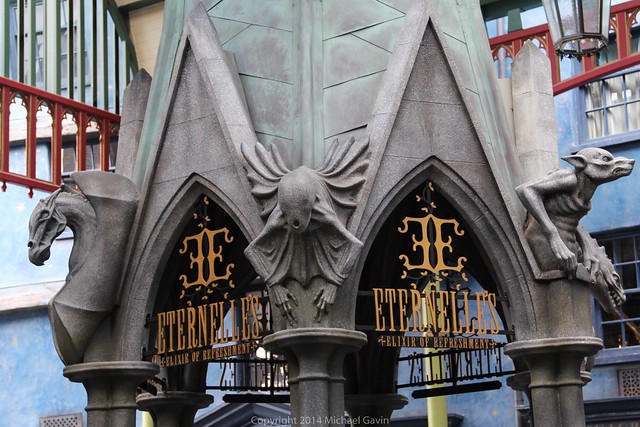 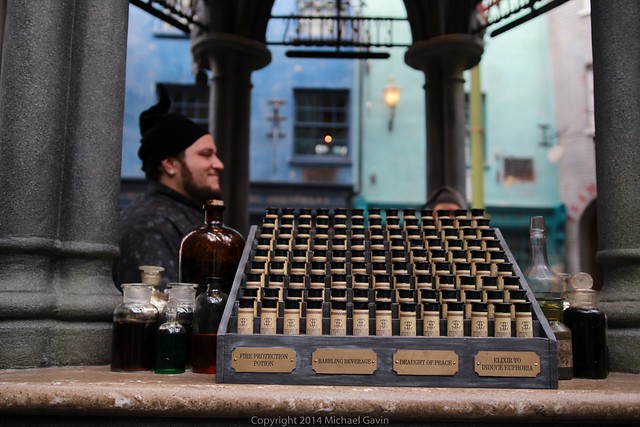 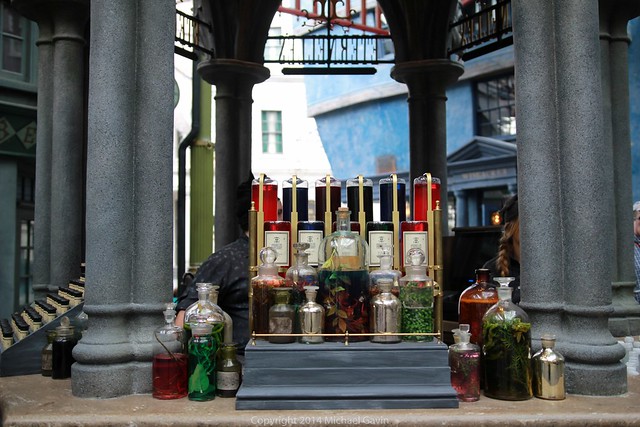 In reality, Gillywater is nothing more than a $4 bottle of water to which flavor can be added. There’s pineapple, watermelon, and a few others. But with its special label and story, there’s no doubt fans will want to try it no matter the cost. Fortunately, it also tastes good.

Tucked away in the back corner of Horizont Alley is the Fountain of Fair Fortune, which offers Butterbeer, Gillywater, Fishy Green Ale, and five different real beers including a couple of new brews for the Wizarding World – Strongbow, Fuller’s London Pride, Wizard’s Brew, Dragon Scale, and Amstel Light. There’s plenty to keep guests refreshed while in Diagon Alley, but beyond Butterbeer and the new ice cream flavors the food and drinks of the new area aren’t a main attraction. It’s all there as a supporting act to the rest of the entertainment found throughout this Wizarding World expansion.