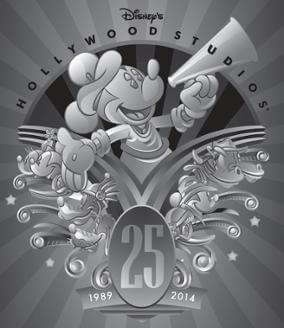 On May 1, 2014, Disney’s Hollywood Studios theme park will celebrate its 25th anniversary with an evening culminating in a special fireworks show.

At 10am,, Mickey and Minnie Mouse be joined by the park’s vice president Dan Cockerell to honor 25-year cast members in a rededication ceremony.

Later that evening at 7pm, a “Stars of the Studios” motorcade will feature Captain Jack Sparrow, Darth Vader, Doc McStuffins, Wreck-It Ralph, Venellope, Sofia the First and others down Hollywood Boulevard.

The day’s celebration will complete with a dance party in front of the Sorcerer Hat followed by a special fireworks show at 9:30 p.m.