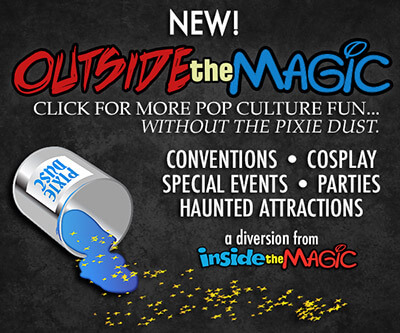 Over the past nine years, Inside the Magic has grown far beyond the simple Disney podcast that started it all. Now reaching out to theme parks, conventions, and other special events across the country, this site features extensive reports about much more than the Mouse.

But as our coverage areas expanded, so did our audience – so much so that a split occurred between those who are only interested in family-friendly theme parks and those who are eager to see everything that the vast world of themed entertainment offers, even when it stretches into far more adult themes.

Thus, Outside the Magic is born. This new sub-blog is now the home for everything that’s “out there” enough to potentially offend our more conservative followers. This is the home for extreme Halloween haunts, sexy cosplay, wildly themed parties, and other special events that simply don’t fit within the boundaries of all-ages entertainment.

So if you saw any of the following pictures on Inside the Magic and thought “that doesn’t belong here,” now it has its own place.

The creation of Outside the Magic will not change the exhaustive coverage Inside the Magic is known for. Our main site will still cover everything from theme parks: Disney, Universal Studios (including Halloween Horror Nights), Busch Gardens, SeaWorld, and more. The main site will still feature conventions like MegaCon, San Diego Comic-Con, Toy Fair, Star Wars Celebration, and numerous others. But when there is any content from these areas that walks the line of questionably adult-oriented content, it will be posted on Outside the Magic instead.

The only exception will be our popular YouTube channel, which will still be home to all of our videos, whether intended for ITM or the new OTM. (Warnings will be added at the beginning of any videos that are intended for more mature audiences.)

More importantly, Outside the Magic is now a home for this web site to expand event coverage even further. Events that were previously deemed too risque are now fair game for this section of the site. So consider this (and the disclaimer at the top) to be your warning: Outside the Magic may contain content that could offend you. There will never be full-on “adult” content here (the Internet already has plenty of those sites). But if there is a new immersive experience, artistic exhibit, or exciting special event that happens to feature nudity, horror, violence, profanity, or other elements that would earn a movie an R rating, Outside the Magic will be the place to feature it.

So if you’re offended by any of the pictures above and are only after 100% family-friendly content, stick to InsideTheMagic.net and don’t venture here to the Outside, where we leave the pixie dust behind to explore the more extreme side of themed entertainment and pop culture fun.

To kick off Outside the Magic with a bit of content, coverage some of the more extreme events recently covered by Inside the Magic has been moved over to this blog. They’re good examples of what can be expected here.