While all eyes are on the upcoming “Muppets Most Wanted,” the sure-to-be hilarious sequel to 2011’s “The Muppets,” it’s important not to forget about the original inspirational, sensational film that now has an entirely confusing name: “The Muppet Movie.” The 1979 classic is now available on Blu-ray in the “nearly 35th anniversary edition,” and it holds up better than ever.

As all things Muppets are hot once again, revisiting this older film is well worth the time to catch favorite never-aging characters acting opposite plenty of celebrity cameos. But back then it wasn’t Amy Adams, Jason Segel, Ricky Gervais, or Tina Fey. Instead “The Muppet Movie” features the likes of Dom Deluise, Mel Brooks, Bob Hope, and Madeline Kahn – plus the legend himself, Jim Henson.

It is unbelievably moving to put this Blu-ray release in today and watch the opening sequence featuring Kermit the Frog, as performed by Henson, sitting on a log, playing the banjo, and performing “Rainbow Connection.” There’s something particularly emotional about this song, especially after Henson’s all-too-early passing. (And Kermit and Rowlf’s live performance of this timeless tune at the 2011 D23 Expo that left everyone smiling while tearing up in remembrance.)

Though “The Muppet Movie” will never not be hilarious, it manage to be enhanced by the extras included on the Blu-ray. Disney Intermission adds Muppet-infused silliness when the movie is paused. And an extra-extra-extra long “extended camera test” from director Jim Frawley places the familiar characters in a series of ordinary everyday scenes, cracking impromptu jokes along the way. It’s footage that was never really meant to be seen by the public, now enjoyed by all who pick up this release, offering a chance to simply hang out with the Muppets.

As for the movie itself, it is presented well, though the picture quality isn’t quite as high as the more recently shot “Muppets” film. It does noticeably look like an older film, a bit dark at times, but still entirely enjoyable. The crispness of the HD presentation is otherwise there and the audio sounds great.

For any fan of this band of felt friends, “The Muppet Movie” on Blu-ray is a must own, available now from all major retailers, including Amazon. 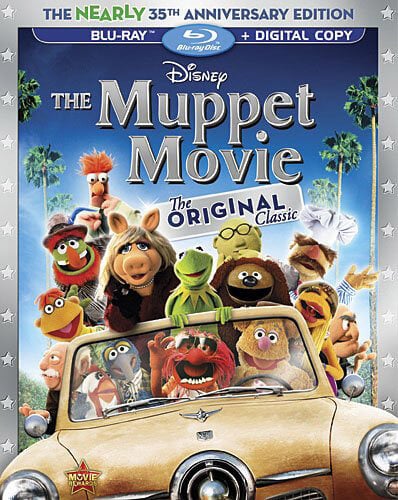