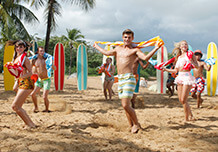 Walt Disney World has announced new Limited Time Magic, both upcoming for a little summertime fun and a chance for future character interactions.

Long Lost Friends Week will return, with Disney offering fans a chance to vote on which characters they’d like to see. The list is itself a bit limited, filled with repeats from last time and even some characters that regularly meet and greet with guests daily. But there are a few rarities, like Louis the Alligator from “The Princess and the Frog.” Here’s the full list of candidates: This summer, don’t stick your head in the sand—instead, hit the shores of Disney’s Typhoon Lagoon Water Park and start making waves at the Teen Beach Movie Beach Party! Another amazing offer from Limited Time Magic, join our DJ and his pals as they storm the beach several times throughout the day. Soak up the sounds of their retro remixes and join the crowd for other fun activities any beach babe or bud could dig. No matter if you’re a biker or a surfer, you’re bound to find something just for you at this unforgettable beach bash! And be on the lookout for Teen Beach Movie as it splashes onto Disney Channel on July 19, 2013!