Walt Disney Studios announced today the world premiere of “The Lone Ranger” will be held on Saturday, June 22, in the Disney California Adventure theme park at the Disneyland Resort in Anaheim, California. A giant red carpet down the park’s iconic Hollywood Boulevard will be lined with thousands of park guests cheering for the film’s stars, filmmakers and the many Hollywood celebrities in attendance.

The Lone Ranger’s horse Silver will make an appearance and an actual train engine built for the film will be on display. 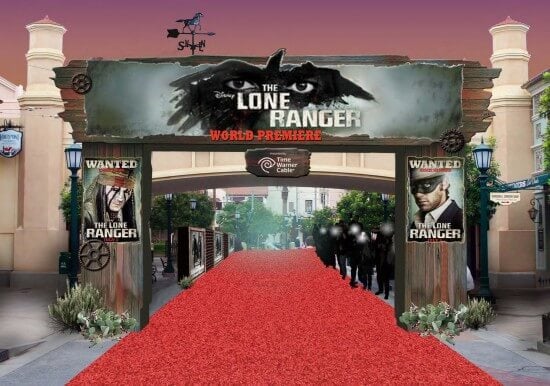 A one-of-a-kind Lone Ranger Ninja motorcycle from Kawasaki, a sponsor of the premiere, will be displayed at the event and will be available for the stars in attendance to autograph. The bike will be auctioned off at a later date, with all proceeds going to the American Indian College Fund.

For that hefty price tag, ticketed attendees will have an opportunity to:

For those not able or willing to pay $1,000 for a ticket, there are other options for seeing the festivities:

Included with admission to Disney California Adventure park, all park guests can seek out a spot to witness the arrivals of premiere guests and celebrities along Buena Vista Street and Hollywood Boulevard. Park guests, however, will not attend the screening of the film or the exclusive after party.

“We’ve had a terrific collaboration with the Native American community throughout the production of Disney’s ‘The Lone Ranger,’” said Alan Horn, Chairman of The Walt Disney Studios. “With the world premiere of this exciting film at hand, we are pleased to commemorate the occasion by supporting the American Indian College Fund.”

Commenting on the premiere event, Tom Staggs, Chairman of Walt Disney Parks and Resorts, said, “All of us at Disney Parks are thrilled to host the world premiere of ‘The Lone Ranger’ at Disney California Adventure. Disney brings unforgettable stories and characters to life in our movies and in our parks and resorts, so there’s no better place than Disney California Adventure to start this trailblazing film on its journey.”