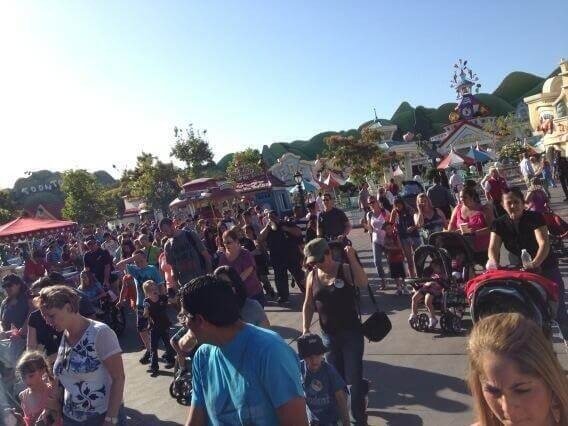 The Mickey’s Toontown area of Disneyland was calmly evacuated tonight following reports of an explosion. No injuries have been reported, but police and fire crews were on the scene. The area was evacuated as a precaution.

According to Anaheim police, the source of the small blast was dry ice in a plastic bottle, placed inside a trash can.

LA Times reporter Allen Wolf happened to be in the area at the time of the blast, tweeting “Something went BOOM in Toontown at Disneyland and now they’re evacuating” just after 5:30 p.m. PT, along with this photo: He later wrote, “It came from a trash can next to the trolley stop in the middle of Toontown. Everyone stopped and looked around when it happened. […] Was very loud.”

It is not clear if the dry ice was intended to be an explosive or simply an accident. Disneyland does use dry ice at some of the outdoor vending carts to keep ice cream bars, ice cream sandwiches, frozen bananas, frozen juice bars, and other foods cool. A “dry ice bomb” is also widely known to be a relatively simple explosive device to make.

Update – Disneyland has released this statement regarding tonight’s incident:

This afternoon, a small bang was heard in a trash can at Mickey’s Toontown. In an abundance of caution, the area was evacuated. There were no injuries and no reported damage. We are working with local authorities who are now on-site and reviewing.

Review is complete. Mickey’s Toontown has been deemed “all clear” by local authorities. Guests are welcomed to return.