Walt Disney Animation Studios’ “Wreck-It Ralph” was an instant hit among anyone who’s ever played a video game – which is just about everyone. Whether familiar only with the early days of “Pong” or to today’s realistic “Call of Duty” warfare, all audiences will recognize the fun cameos from classic gaming characters mixed in with Disney’s originals that tie together in an exciting and heart-warming story.

Though “Wreck-It Ralph” didn’t win the big prize in animation at this year’s Academy Awards (which went to Disney/Pixar’s “Brave“), it has already earned high scores among fans, with star characters Ralph, Vanellope, Felix, and Sergeant Calhoun taking a permanent place alongside other Disney favorites.

Coming home, “Wreck-It Ralph” looks great in both 2D and 3D, particularly with the latter format drawing viewers further into the video game worlds created for the film. As usual, the 1080p high definition video and 7.1 surround audio are perfectly presented on Disney’s Blu-ray discs.

But even more impressive is the now Oscar-winning short “Paperman,” which emulates a traditional 2D style using CG animation and does so even more impressively in 3D. This simple story brings smiles to the faces of just about everyone who watches it and seeing it in 3D is even more stunning, with a look that’s like no other, well deserving of its award.

Bonus features included on the release are all enjoyable, beginning with “Bit by Bit: Creating the Worlds of Wreck-It Ralph,” which takes viewers behind the scenes for the creation of each of the fictitious gaming worlds designed for the film. Hosted by director Rich Moore and other filmmakers, this extra details the 8-bit world of Fix-It Felix Jr, Sugar Rush kart racer, Hero’s Duty first person shooter, and Litwak’s Arcade.

Those looking for the “easter eggs” hidden throughout the film, this release’s Disney Intermission feature is “The Gamer’s Guide to Wreck-It Ralph” hosted by Chris Hardwick, offering an inside look at many character cameos and game references each time the film is paused.

Deleted and alternate scenes along with amusing fake video game commercials round out the bonus features, all entertaining.

“Wreck-It Ralph” is a fantastic movie with the equally amazing short “Paperman” included on its home release, as it was in theaters. The combination of both is a must-own for Disney fans and gamers alike.

“Wreck-It Ralph” is available now on Blu-ray 3D via Amazon and other major retailers. 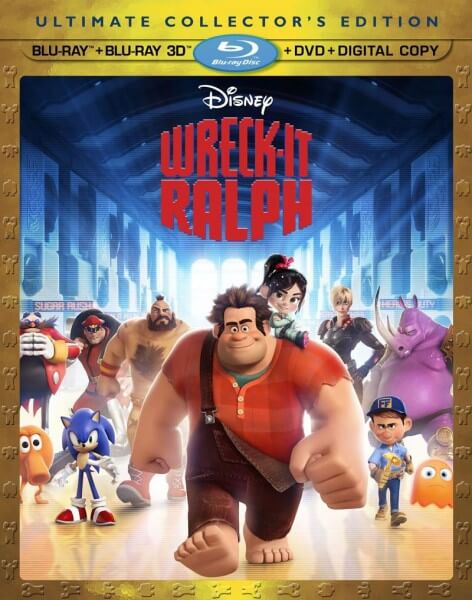