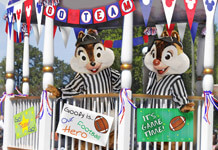 For Limited Time Magic from February 1 to February 9, 2013, Disney will be helping guests celebrate the Super Bowl with characters, food, and a special guest appearance:

Magic Kingdom park is getting in the Super Sunday spirit with a super pre-parade held daily February 1 to February 4, 2013—and an MVP appearance on February 4! Just before the Celebrate a Dream Come True parade, Disney football “star” Goofy will hit the streets of the park for a lively pigskin celebration.