Visitors to Walt Disney World in search of holiday entertainment will find it year after year at Mickey’s Very Merry Christmas Party at the Magic Kingdom. This after-hours separately ticketed event provides a special parade, fireworks show, character meet and greets, and more. 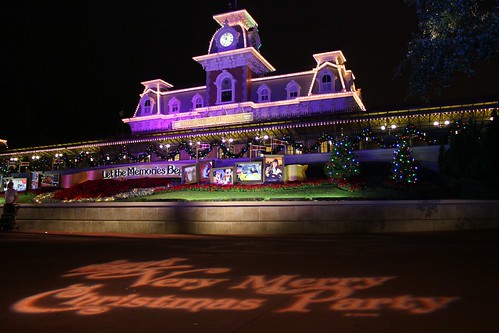 Though guests can expect the party to offer essentially the same entertainment each year, a few changes are made to keep it feeling a bit fresh, with the return of some old favorites and the introduction of some surprising new offerings.

The Disney character most closely tied to the Christmas season has returned after a year off. Scrooge McDuck is meeting and greeting guests in Fantasyland during Mickey’s Very Merry Christmas Party. Last year, construction of New Fantasyland prevented his appearance, but he makes a most welcome return to the party for 2012, even if tucked off in a corner. 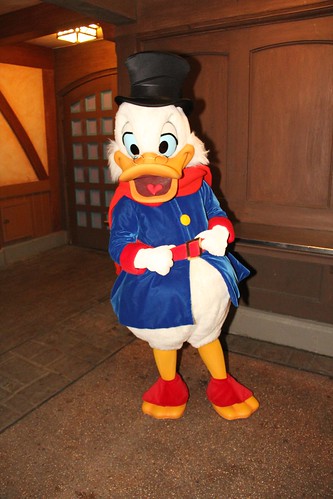 Also new this year: Oswald the Lucky Rabbit. Sadly, Oswald is not a meet-and-greet character in Disney’s parks (yet). But quite a few guests were spotted throughout the party with homemade Santa Oswald ear hats: 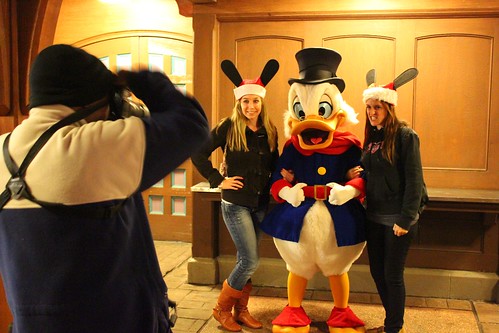 The biggest addition to the Magic Kingdom is clearly the New Fantasyland expansion, which is now open during Mickey’s Very Merry Christmas Party. In addition to a new ride, restaurants, and other experiences, New Fantasyland also offers some unique new Christmas time views that go well with the party atmosphere: 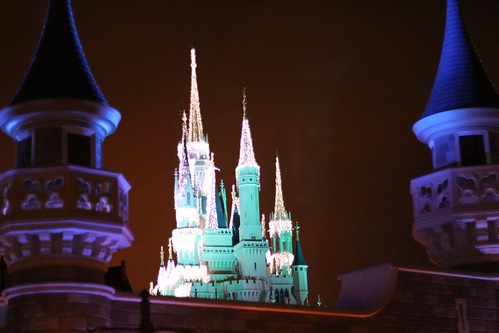 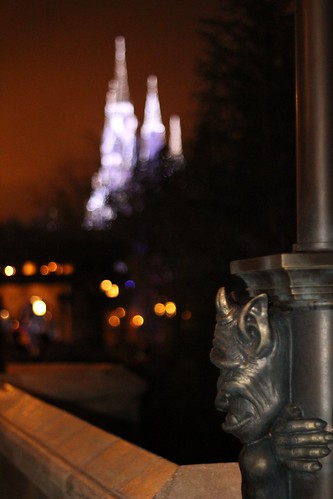 This year the Kringle Crew is the most notorious addition to Mickey’s Very Merry Christmas Party. Following in the footsteps of the Street Jam added to Mickey’s Not-So-Scary Halloween Party a couple months ago, the Kringle Crew is a similar street act, combining hip-hop elements with traditional Christmas entertainment. The result is a rather abrasive time killer that is meant to hold the interest of guests waiting on Main Street USA for the party’s parade to appear. The Kringle Crew features obnoxiously loud and often off-key renditions of Christmas songs, inviting the crowd to “ho ho hooooooo” along. A handful of kids seem to get a kick out of it, but many park goers are left wondering when it’s going to end.

Worst of all, this act replaced the Dapper Dans, who sang Christmas songs (quite well) on Main Street before the parade in years past. Now, there’s this…

Not exclusive to Mickey’s Very Merry Christmas Party but making its debut there is the new Cinderella Castle projection show called Celebrate the Magic. It’s a new version of The Magic, The Memories, and You! that uses the castle’s surface as a giant screen, illuminating it in colorful animation from classic and contemporary Disney films. It’s not as moving as its predecessor but still enjoyable and during this season features a special holiday sequence.

Though identical to past years of Mickey’s Very Merry Christmas Party, I include Holiday Wishes in this list as something “new” only because the particular presentation that I attended a few weeks ago featured an unexpected new twist: fog. With low lying clouds nearly touching the top of Cinderella Castle, many of the show’s fireworks were obstructed by a grey haze. Though the fireworks themselves weren’t always visible, their effects were quite bright, causing the sky to shine in bold hues. It was a fun twist on a long-running show, courtesy of Mother Nature.

First-timers attending Mickey’s Very Merry Christmas Party will be impressed by the wide variety of holiday entertainment offerings throughout the evening. But, as with Mickey’s Not-So-Scary Halloween Party, repeat visitors are finding the event to be, well, repetitive, longing for a few new twists – something more impressive than the Kringle Crew. There’s nothing wrong with the Very Merry party as is, but a sprucing up would surely draw even more locals and Walt Disney World regulars back again next year and for many years to come.