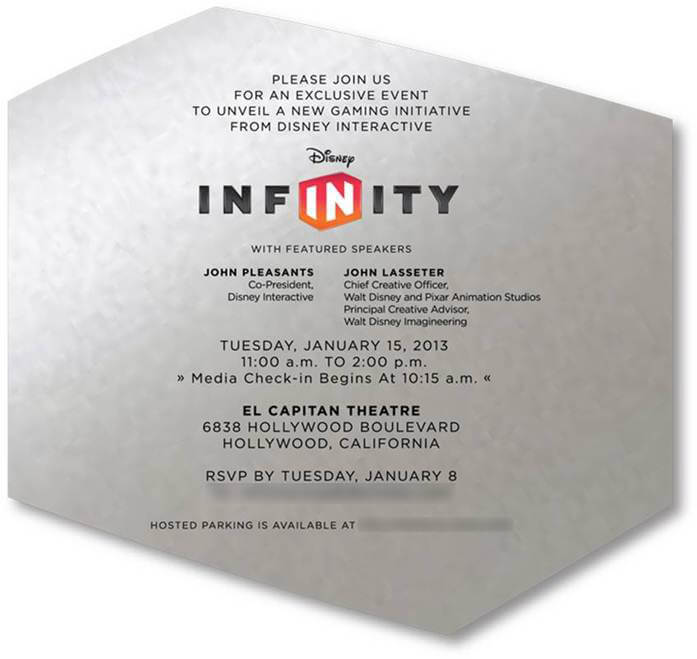 Disney Interactive has announced plans to reveal a “new gaming initiative” next month called “Disney Infinity.” Though no details arrived with our invitation to the unveiling, which will take place for the press at Disney’s El Capitan Theatre on January 15, 2013, rumors point to this new game being Disney’s answer to Activision’s popular Skylanders series, offering players a chance to interact with gaming systems by way of physical figurines, each representing a different Disney character. Disney’s library of characters is certainly not small, now also including the worlds of Pixar, Marvel, and even Lucasfilm / Star Wars. The possibilities for this game, as well as accompanying collectible figurines, seems endless with an assortment of characters from decades of franchises all potentially available for its use.

UPDATE: D23 members will have a chance to attend this event, including playing the new game, lunch, and a gift. Free tickets (plus $5 for processing) will be available January 3 at 10 a.m. PST via the D23 web site.

Stay tuned for more details on Disney Infinity as the date draws nearer.

Comments Off on ‘Disney Infinity’ video game to unveiled in Hollywood next month by John Lasseter, rumored to follow popular ‘Skylanders’ series