The 1980s were an exploratory time for Disney animation, bridging the gap between less-tha-successful efforts of the previous decade with what ultimately became the second “golden age” that brought classics like “The Little Mermaid” and “Aladdin.” Right in the middle came “The Great Mouse Detective,” co-directed by Ron Clements and John Musker (along with Burny Mattinson and David Michener), who ultimately would be instrumental in the revival of Disney dominance in the family entertainment.

Over the years “The Great Mouse Detective” is undeservingly forgotten, despite featuring a rousing musical number and plenty of Disney firsts. It was the first to combine computer generated images with 2D hand-drawn animation with stunning results. It was also the first to cast gloriously notorious actor Vincent Price in a starring role as the movie’s villain, Ratigan, in this Sherlock Holmes-inspired tale. 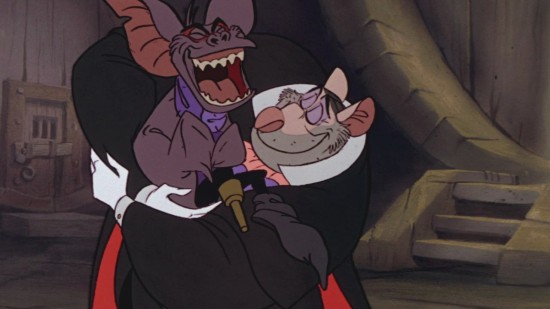 Based on the book “Basil of Baker Street,” this film that follows mice instead of people, with the Holmes and Dr. Watson roles taken on by characters named Basil and Dr. Dawson, a duo that very much mirrors that famous pair while trying to solve the mystery of a young girl’s kidnapped father.

From the astoundingly European voice cast to the sense of discovery, “The Great Mouse Detective” captures the spirit of any great Sherlock Holmes story, with enough references to make any Holmes fan smile, from the way Basil deduces Dawson’s origins upon their first meeting to Basil’s own quirks, hobbies, and habbits. And even Holmes and Watson are present for a few brief moments, with Sherlock briefly voiced by the legendary Basil Rathbone. Price plays up his first and only role as a Disney villain with dastardly delight, even singing two intriguing songs that elaborate on just how much of a bad guy he is. (It’s also fun to hear Alan Young voice a Disney character that’s not Scrooge McDuck, though his Scrooge-ness still shines through.)

And when the movie’s climax sends its characters through a CG-rendered series of gears and clockwork mechanisms, the result is an impressive feat of animation, especially for its 1986 release. In some ways, the seamless blending of 2D and 3D renderings in this film is superior even to the look of some of today’s fully CG films.

Unfortunately this film did not receive many enhancements in its transition to Blu-ray. The movie itself looks and sounds great in high definition with 5.1 surround sound, a must-own for any fans of the film. But the limited bonus features are recycled from previous releases – and there are only three of them. One is a history of sleuthing and detectives, another a singalong with Ratigan, and the third a making-of featurette that’s rather extensive but also incredibly dated, at times looking like a third generation VHS copy.

“The Great Mouse Detective” isn’t quite up to the caliber of the classics produced during the renaissance period of Disney animation in the late ’80s and early-to-mid ’90s, but it is very close, a clear precursor to those great films and definitely one worth owning for fans of adventure, Sherlock Holmes, or just a little mousing around.

“The Great Mouse Detective” is available now on Blu-ray via Amazon and other retailers. 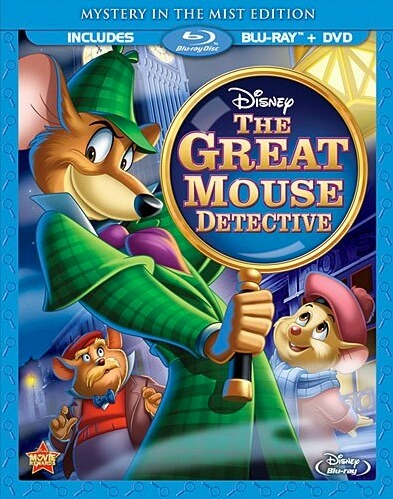