Review: 'The Aristocats' Blu-ray - Toe-tapping family tale picks up the tempo with high-def transfer and bonus features - Inside the Magic

As Disney works through its back catalog, upgrading animated and live-action films to today’s Blu-ray technology, not all titles receive equal treatment. While some of the films that fans are less fond of make the jump to high definition with little fanfare, “The Aristocats” has received an elite treatment worthy of its title.

While the story of “The Aristocats” is a fun, family adventure putting house cats in the mix with a variety of street felines, the real heart of the film lies in its music, penned by songwriting duo and Disney Legends Richard and Robert Sherman. Tunes such as “Thomas O’ Malley Cat” and “Ev’rybody Wants To Be A Cat” are highlights of the movie, bringing lighthearted dance to a comedy and action filled film. It’s a well rounded story with smiles to be found throughout.

Best of all, on Blu-ray, “The Aristocats” has never looked or sounded better. The vibrant HD transfer fills widescreen displays with color, crisp lines, and smooth animation, like it was a new movie. And the music fills the air, inviting viewers into a variety of cat concerts.

Moreover, the HD excellence continues in new bonus features, all revolving around the heartbeat of “The Aristocats,” the music. In one new extra, Richard Sherman introduces and shares an alternate introduction to the film, including a song that never made it too far off the drawing board, as once performed by him and his late brother. The music continues into another bonus feature that offers a modern remix of the movie’s music in a rather YouTube sort of way.

Even the old bonus features recycled from previous releases of this movie are still quite enjoyable, though not presented in high-definition. There’s a wonderful tribute to the Sherman Brothers and a fun short film starring Figaro the cat and Minnie Mouse, amongst others.

Altogether, “The Aristocats” on Blu-ray is a classic Disney film that has been given a pitch perfect treatment for today’s audiences to enjoy as much as in the past.

“The Aristocats” is available on Blu-ray on Amazon and most retailers. 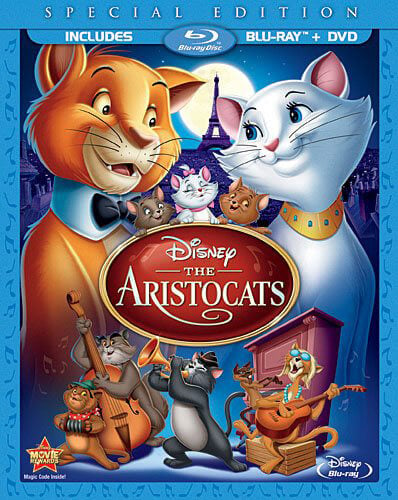 Comments Off on Review: ‘The Aristocats’ Blu-ray – Toe-tapping family tale picks up the tempo with high-def transfer and bonus features