Some might be surprised to learn that the classic Disney/Touchstone ’90s comedy “Father of the Bride” is actually a remake of a 1950 film of the same name. But it’s Steve Martin’s anxiety-ridden George Banks and particularly Martin Short’s outlandish Franck Eggelhoffer that are most memorable from the 1991 film, reprised four years later in the sequel.

Twenty years later (or so), Disney has released both films onto high-definition Blu-ray in a two-pack. The first still shines with poignant and touching moments for anyone who’s ever had anything to do with a wedding, combined with laugh-out-loud scenes from the duo of comedic legends, aided by solid performances by their co-stars. All these years later, it’s still fun to watch the Banks family’s ordeal in planning a wedding that spirals out of control only to arrive to a quiet calm in the end as George comes to grips with letting go of his baby girl. And it has been years since I last watched this movie, finding a new appreciation for it now that I am married.

Part II doesn’t hit home for me, as it centers around a pair of Banks babies unexpectedly on the way, an event I have no plans on duplicating in my own household. The comedy is a bit more over-the-top, even going too far in some slapstick scenes, but just as with the first, those touching moments spent with the Banks family are exactly what drew big audiences to the original (and its sequel) in the first place. And I imagine anyone who has gone through the surprise, anticipation, and joy of expecting a newborn will find even more to relate to in the second “Father of the Bride” than I do.

Walt Disney World aficionados are also quick to note that “Father of the Bride” was so popular that it was unavoidable for Disney to connect the movie to their own real-life wedding planning area at the Grand Floridian Hotel, naming it “Franck’s Bridal Studio.” Though there is not actually a “Franck” there, guests interested in planning their own wedding will find many similarities to the experiences George, Nina, and Annie encounter in the film.

But while both of these films are just as enjoyable today as they were when they were first released, their new high-definition transfers are nothing to be excited about. Disney has not given these films the Franck attention to detail, as it seems little effort was made to convert standard definition to HD beyond simply bumping up the video resolution. Both movies often suffer from severe graininess, with little colorful sparkles jumping around the screen. Occasional shots look pristine and show off what the Blu-ray format is capable of, but most simply look bad.

Bonus features are also lacking in this release, including only a rather old “making-of” featurette, outtakes from interviews with Martin and Short, and commentary on the first film.

Fortunately, these aren’t big-budget summer blockbusters with fast cuts and action requiring utmost concentration on every on-screen detail. They’re simply funny and relatable stories that all audiences can find enjoyment in, even if they don’t look their best. Anyone who owns an old DVD copy of these movies has no reason at all to buy the new Blu-ray release. But no library should be absent of both “Father of the Bride” films and getting them both together in the new Blu-ray 2-pack is currently the best way to go. 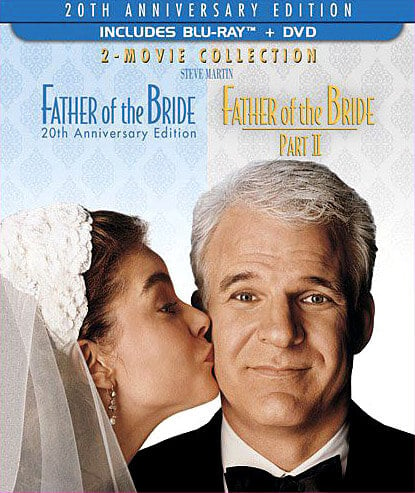 “Father of the Bride” Part I & II is available now on Amazon and includes both Blu-ray and DVD copies of the films.

Comments Off on Review: ‘Father of the Bride’ I & II Blu-ray – Franck’s perfectly-prepared and hilarious wedding marred by grainy high-def release