Review: 'Real Steel' - More than meets the eye for this rock 'em, sock 'em film with heart - Inside the Magic

A big-budget Hollywood movie about fighting robots sounds like a perfect formula for success. But in the case of DreamWorks’ “Real Steel,” it has certainly been a fight to find an audience, despite the fact that the Disney-distributed film is a real winner.

In the 3.5 months since its theatrical release, “Real Steel” brought in only around $85 million at the domestic box office, $25 million short of its reported production budget. It’s done better overseas, gathering $210 million and making it profitable for DreamWorks and Disney, but the question is why hasn’t this excellent film done better?

The problem with “Real Steel” isn’t the film itself, as it’s a thoroughly-entertaining movie that successfully pairs action sequences with a somewhat heart-warming estranged father-and-son tale. This is a case of a movie that simply couldn’t be marketed well. Often described as “Rocky with robots,” or worse, a movie version of the popular children’s toy “Rock ‘Em Sock ‘Em Robots,” the film is truly neither. Producer Steven Spielberg and director Shawn Levy managed to create a science-fiction driven story set in the near future that treats its robot characters with nothing but respect, which is the key to this film’s success. 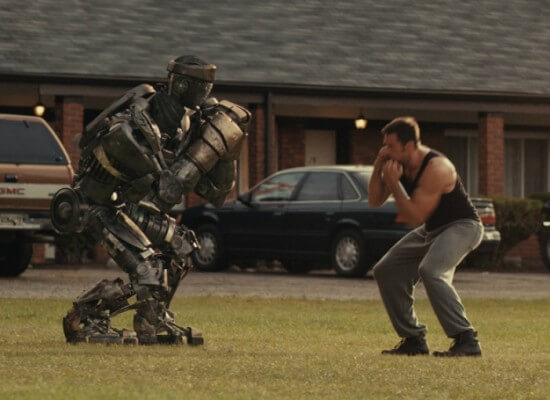 Unlike Michael Bay’s “Transformers” franchise, which does nothing but disrespect the widely-cherished Autobot and Decepticon characters, often reducing them to slapstick buffoons, “Real Steel” continuously offers a fun look at what amount to oversized, real-life video games – robots controlled by humans to replace them in the boxing ring. It’s a somewhat believable premise, blaming the increasingly intense sports like MMA / UFC for viewers wanting more violence, ultimately yielding robot boxers as the next step in creating the bigger and bigger blows people want to see. But behind each robot is a human, from an Asian computer programming expert to a washed-up former boxer, controlling all the action. It gives an element of humanity to each of the robot personalities. As to whether the robots in “Real Steel” are ever truly alive, director Shawn Levy isn’t talking. (Spoiler alert at that link!)

But despite all its ups, “Real Steel” still has had a marketing problem, as it’s tough to convey everything written above in a 30-second TV commercial or even a 2-minute movie trailer. Instead, the film has been billed repeatedly as a “robot boxing” movie and nothing more, which couldn’t be further from the truth. A perfect example is the “Meet the Bots” sizzle video released online just a few days ago, making “Real Steel” feel like just another robot movie:

But as much if not more screen time is given to the human main characters, played by Hugh Jackman, Evangeline Lilly, and newcomer Dakota Goyo, than the robots. The film’s title accurately indicates that there is at least an equal amount of “real” in the movie as there is “steel,” a formula which leads to a movie that really should have been more successful at the box office. Those “Real Steel” robot toys that are hanging on the pegs at stores across the country should have been flying off the shelves this past Christmas season, but instead were left hanging after far too few kids saw the film.

And it’s clear from the lengthy extras included on the Blu-ray release that filmmakers are truly proud of their creation and were expecting to have a big success on their hands. High-quality, full HD extras include an extensive behind-the-scenes look at the creation of one of the film’s most elaborate location shoots, a visit to the shop where the real-life robot versions of the film’s robots were created by protégés of the late Stan Winston (yes, they did create real, full-size robots, not just computer-generated ones), time in the boxing ring with film consultant and boxing legend Sugar Ray Leonard teaching Hugh Jackman a few things about the sport, and a series of deleted scenes exuberantly introduced by Levy, who reveals that an entire story arc was seamlessly removed during post-production. Disney’s Second Screen technology makes its way to this release as well, allowing viewers to see extra content on an iPad or computer while watching the movie on a TV or other display.

This great set of bonus features adds to a movie that is far better than its oft-repeated “Rocky with robots” description. Marketing: 0. “Real Steal”: 1. 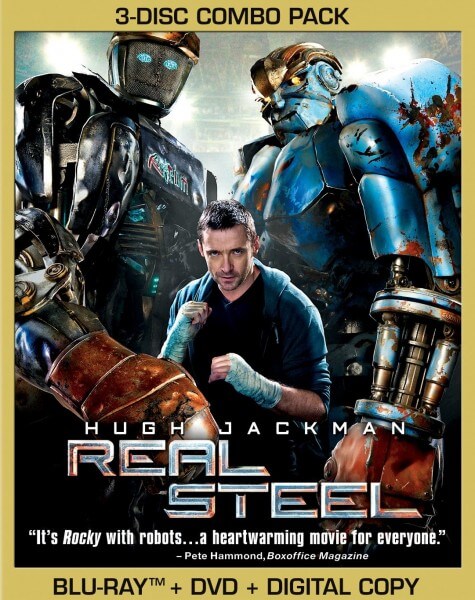 “Real Steal” is available now on Amazon in several formats, including a three-disc combo pack with Blu-ray, DVD, and digital copy.

Comments Off on Review: ‘Real Steel’ – More than meets the eye for this rock ’em, sock ’em film with heart