Marking 20 years since its debut, tomorrow Disney releases “The Rocketeer” to Blu-ray, offering fans of the film’s instantly recognizable style the best home version of the movie to date. Even in the year 2011 (which sounds far more futuristic when read as twenty-eleven), air travel via personal jet packs still isn’t commonplace, practical, or even possible. So two decades later, “The Rocketeer” still manages to capture that spirit of adventure, fulfilling a fantasy of what it would be like to fly through the skies.

A few rough green screen / composite shots aside, “The Rocketeer” has never looked better than on this new high-definition Blu-ray release. Soaring high above the blurry DVD released in 1999, Disney has given this iconic film the royal treatment, polishing it up with crisp visuals and a glorious surround soundtrack. And given that the plot is set in the 1930s, the film never looks dated, with its stars (particularly the beautiful Jennifer Connelly) making the somewhat far-fetched story entirely believable and enjoyable, even amidst today’s all-too-wacky Hollywood stories.

It’s rather disappointing that such a great release of a should-have-been classic Disney live action film comes only with one extra: a noisy copy of the movie’s original theatrical trailer. Given that Disney’s D23 fan club recently held a 20th anniversary event for the film that included appearances by some of its stars and its director (who also recently directed “Captain America”), it would have been nice to include some footage from that event, or at least some retrospective interviews on what has made “The Rocketeer” withstand the test of time so well. Instead, fans are left only with the film itself and no other featurettes to enjoy.

Even so, there is no better way to own or watch this movie. Prior to viewing the Blu-ray release, I hadn’t actually sat down to watch “The Rocketeer” in many, many years, and now I’m quite glad I did. It’s a film that could be re-released into theaters, untouched, and audiences would likely enjoy it more than most of the drivel being pumped into the box office these days. Fortunately, fans need not head to the local theater to see it again, as come tomorrow, “The Rocketeeer” flies home, ready for a new generation of kids to fantasize about donning the “hood ornament” helmet, strapping themselves to a jet pack, and launching into the sky, evading capture from “the Feds” and the evil Nazis. (This one certainly did.) 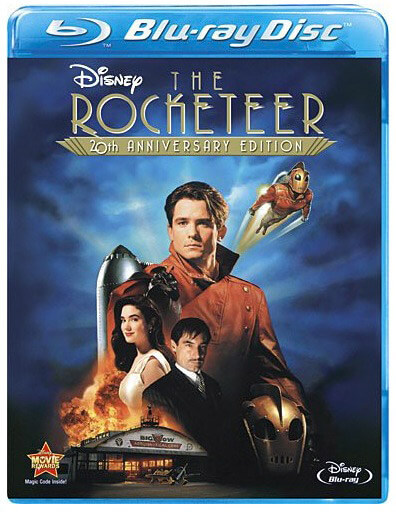 You can order “The Rocketeer” 20th anniversary Blu-ray on Amazon.