Review: 'Meet the Robinsons', 'G-Force', 'Chicken Little', and 'Bolt' Blu-ray 3D combo packs - The good and the bad of 3D - Inside the Magic

Just in time for the busiest shopping season of the year, Disney has released four of its recent catalog movies onto Blu-ray 3D for the first time. “Chicken Little,” “Meet the Robinsons,” “Bolt,” and “G-Force” all hit store shelves just over a week ago and while all four films are somewhat entertaining in their own unique way, none are memorable enough to go down as Disney classics. But that doesn’t mean at least some shouldn’t be seen, enjoyed, and added to a Disney home movie collection. 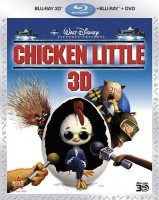 Hollywood’s first big 3D digitally-animated film was “Chicken Little,” embellishing the old “sky is falling” tale into an 81-minute CG movie. This often too self-referrential comedy that opens with struggling to find its place within film history, even parodying “Raiders of the Lost Ark” and Disney’s own classic “The Lion King,” plods along with a cast of zippy characters who serve as constant comic relief from little else. It’s not a terrible film, but not particularly memorable either. But it is interesting to see how far Disney’s CG animation unit (separate from Pixar) has so greatly evolved since this entirely average film to produce the widely-loved and exceptional “Tangled” last year.

Likewise, this Blu-ray 3D / Blu-ray / DVD combo pack adds little value to the film, with a variety of largely throwaway bonus features populating the included discs. The “making of” and Q&A extras are the most interesting, but are surrounded by unneeded sing alongs and games. (Does anyone ever actually play DVD games or sing along with sing alongs?)

This film was actually converted to 3D in post-production at Industrial Light and Magic. Fortunately, many original data files were provided by Disney to ILM for the conversion. Unfortunately, it didn’t help, as of the four movies being reviewed together here, “Chicken Little” was by far the least appealing in 3D. Beyond ambient effects, this is one CG film that has no need to be seen in 3D.

The “Chicken Little” Blu-ray 3D combo pack is available for purchase on Amazon. 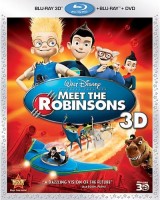 3D pushed forward with “Meet the Robinsons,” which broke box office 3D records at the time, opening with $7.1 million on 581 3D screens. But it took four years to finally make its way to home 3D screens, now that consumer technology has caught up with movie theaters. And just as it did in theaters, this film looks great in 3D at home. It’s “real” 3D, in that it was rendered with left and right frames, rather than being post-converted. But more than that, it’s a pretty good movie.

The futuristic story and characters are just above average, though “Meet the Robinsons” never quite quite reaches the great levels many Disney fans hoped it to find. References to Disneyland’s Tomorrowland and concluding with a quote from Walt Disney himself, the film seems tailor made to appeal to hardcore Disney fans. But ultimately it falls just short of the mark, with simplistic graphics, animation, and overall story. Of the four films re-released last week, it’s definitely the best one to own, but only for the movie itself, as the included extras are nothing special.

The “Meet the Robinsons” Blu-ray 3D combo pack is available for purchase on Amazon. 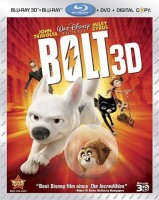 Disney releases an animated film that follows a talking dog, cat, and hamster starring Miley Cyrus and John Travolta. Did I lose you there? Fortunately, “Bolt” is a better movie than it sounds when broken down. The film’s premise of a dog who thinks he’s a superhero but actually only plays one on TV is surprisingly entertaining, with both expected and unexpected turns arriving as the story progresses. And to Disney’s credit, much in the way Pixar uses its famous talent, attention is never overtly drawn to the celebrity voices. They’re in the film for their acting abilities, not simply because they’re celebrities.

“Bolt” also features “real” 3D imagery, rather than post-conversion, so the CG 3D graphics look as good as they should. The visuals are crisp, clear, and great depth is achieved. And the bonus features are plentiful, with a solid variety of “making-of” extras as well as an animated short. Time was clearly put into this release, making it the most well-rounded of the four reviewed here. I wouldn’t recommend “Bolt” as a film over “Meet the Robinsons,” but it’s a close second when factoring in all the extras that accompany it. And inexplicably, of these four, “Bolt” is the only combo pack that also includes a digital copy.

The “Bolt” Blu-ray 3D combo pack is available for purchase on Amazon. 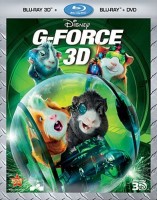 If there was an award for toughest movie to categorize, “G-Force” would take top honors. It’s both a live-action and an animated film. Its humor is a mixture of jokes that only adults will get but also slapstick moments that will only appeal to young children. And most of all, reviews couldn’t be any more split, with some loving the Jerry Bruckheimer-produced action while others found the somewhat complicated story entirely too confusing for a film starring talking guinea pigs. It’s not a movie for my tastes, but that doesn’t mean it’s completely worthless either.

Regardless of the film itself, it does suffer from the dreaded live action post-conversion. Not only was converted from 2D to 3D, but it also enters the world of 3D gimmicks, with visuals crossing out of the wide 2.40:1 aspect ratio into the “black bars” at the top and bottom. The action film does feel more cinematic with the ultra-wide presentation, but the fake depth does little to add to the overall presentation.

“G-Force” does feature several Blu-ray exclusive bonus features that offer a good look at the making of this film as well as a look back at Bruckheimer CG productions of the past. But these decent extras are coupled with the usual assortment of uninteresting music videos, fake bloopers, and other duller extras.

The “G-Force” Blu-ray 3D combo pack is available for purchase on Amazon.

Comments Off on Review: ‘Meet the Robinsons’, ‘G-Force’, ‘Chicken Little’, and ‘Bolt’ Blu-ray 3D combo packs – The good and the bad of 3D