When SeaWorld opened the new Grand Reef at its Discovery Cove theme park back in June, the new salt water swimming and snorkeling area was teeming with aquatic life, from fish to rays and even sharks. But one unique Grand Reef experience wasn’t quite ready for the lagoon’s grand opening.

In the months since that opening, Discovery Cove has debuted and fine tuned their new SeaVenture underwater walking tour, and invited me back to the park last week to experience it. With bathing suit in hand, I gladly accepted the chance to try something entirely different than any other theme park experience around. 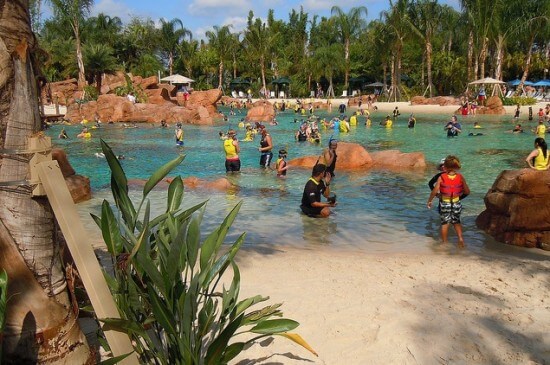 The Grand Reef is located in the back, right corner of Discovery Cove, in an area formerly off limits to guests. When it opened, I enjoyed a couple hours of swimming around, marveling at the close proximity of a variety of sea creatures. But when I couldn’t help being jealous of the Discovery Cove employees who were testing the SeaVenture experience at the time, watching them effortlessly walk around underneath the water, seeing and breathing easily courtesy of special dive helmets.

Three months later, it was my chance to play “20,000 Leagues Under the Sea” and dive down beneath the water’s surface.

I’ll admit, when returning to Discovery Cove’s Grand Reef, I was slightly apprehensive. No SCUBA certification is required to experience SeaVenture, only the ability to walk and breath normally. Even so, each undersea adventure is prefaced by instructions and warnings of what to do and what not to do while underwater. 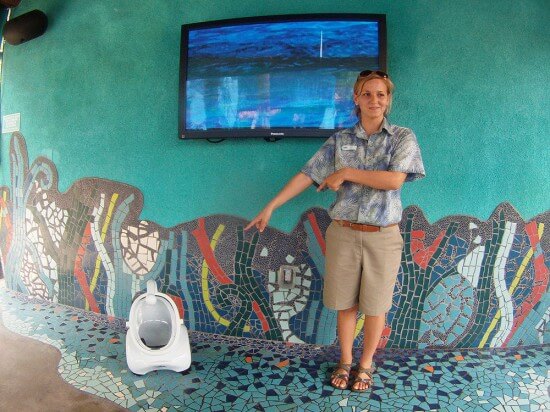 It’s repeatedly emphasized to keep your head upright and breath normally (“Don’t hold your breath!”) while underwater. The helmets are designed such that a constant flow of fresh air is circulating within the bubble created by slowly lowering them down from the surface.

Despite it all sounding simple enough, upon finally climbing down the ladder, having the helmet lowered onto my shoulders, and ultimately entering the water, I did – for a moment – have the feeling I needed to hold my breath. After all, I wasn’t wearing a tight fitting mask, snorkel, or hooked up to any other breathing tube, so I didn’t have an immediate physical connection to the air that was around me. But after that initial “this is… new” moment, I realized I could indeed breath normally underwater. And that was when it hit me that SeaVenture is truly a new and exciting experience. 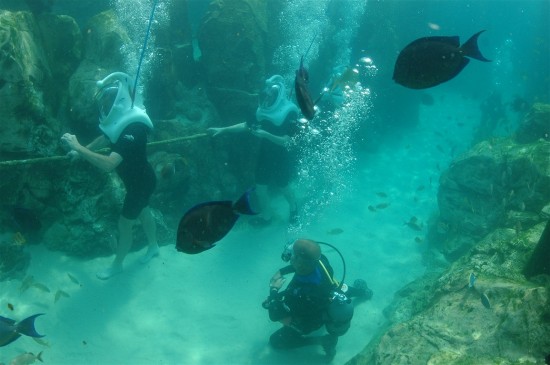 Within seconds of stepping away from the ladder, weightlessly floating across the floor 15 or so feet below the surface, a large ray swam directly over my head (as seen in the video above). This would be the first of many undersea eye-to-eye encounters with interesting creatures. I’m no fish expert, so I can’t name each species I saw, but I’m sure I saw at least 15 different types of tropical fish along with plenty of other sea life including lionfish and sharks. 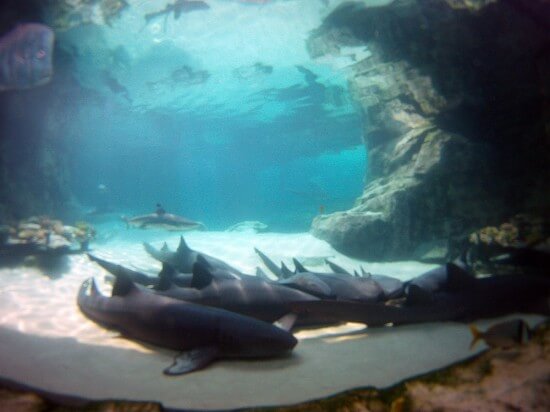 And yes, the sharks are safely tucked away behind glass – a full, 8-foot-tall, 21-foot long panoramic window, in fact. But while down below, it’s easy to forget there’s a protective transparent wall between you and them, offering a quick thrill. 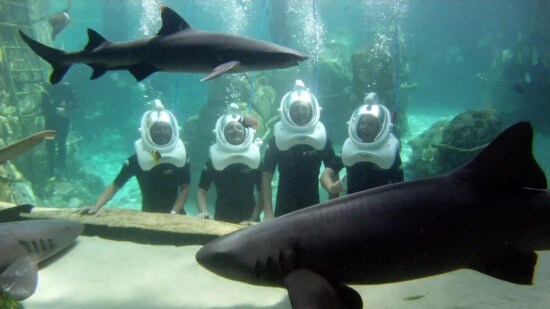 My SeaVenture experience was abridged, lasting only around 10 minutes. Normally, the whole experience, including orientation and the underwater tour, is around an hour long (roughly 20 minutes once submerged), for groups of up to six people per excursion. During that time, not only is the adventure of walking and breathing freely underwater an attraction unto itself, but plenty of surprise interactions are offered up by the Discovery Cove guides leading the way, including one-on-one touches with unique animals. The experience doesn’t take guests through the entire Grand Reef by any means, sectioned off to a lap around a special SeaVenture-only area. But with so much to see around the loop, it never feels like a small area. 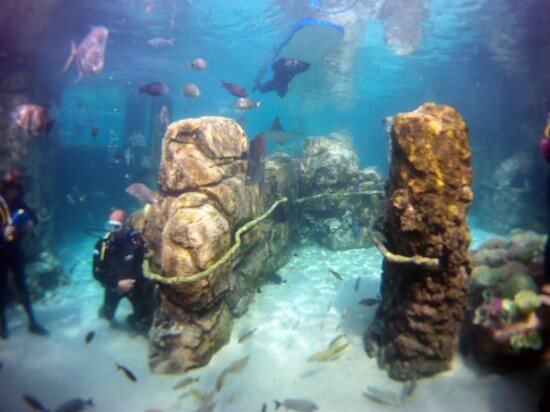 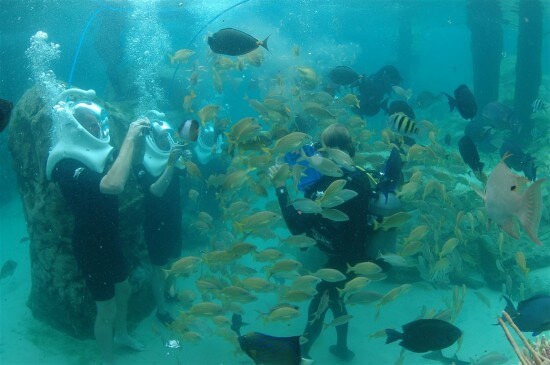 On top of the cost to get into Discovery Cove for the day, SeaVenture does cost extra. The price is $59 per participant, which is a bargain for anyone eager to pretend to be Captain Nemo for an hour, exploring the vast blue underwater world that’s normally off limits to us air breathers. But it’s smart (and practically required) to book ahead, as a limited number of guests can experience SeaVenture each day.

Just after my brief life spent breathing under water, I spoke with Reid Miller, director of zoological operations at Discovery Cove, who told me that SeaVenture has been hugely popular and successful in its first few months. With efficiency of getting guests into and out of the water steadily improving in recent months, Miller said they’re currently able to accommodate 80-something guests per day in SeaVenture, with hopes of driving up that over 100 soon, ultimately reaching the maximum capacity of somewhere around 130-140. Even so, Discovery Cove admits up to 1,500 guests each day, so less than 10% will have an opportunity to try SeaVenture. Miller also explained to me that there is simply nothing like SeaVenture around, with the closest similar experience being in Mexico – which he tried and found far fewer sea life sightings than Discovery Cove guarantees.

For anyone looking to try something different not found at any other local theme park, SeaVenture, along with spending a day at Discovery Cove, is a great way to find a new thrill that’s entirely relaxing at the same time. And while the cost of admission plus the SeaVenture experience isn’t cheap, the price also includes memories and stories of enjoying an entirely new experience – and isn’t that what life is all about?

More information about SeaVenture can be found on the Discovery Cove web site, but reservations can only be made on the phone for now, by calling 1-877-557-7404, with online reservation ability coming in the future.