Amidst decades of classic Disney animated films, 1981’s “The Fox and the Hound” is often overlooked. It arrived at an era leading up to Disney Animation reaching their second “golden age” of films like “Aladdin” and “The Little Mermaid,” but that doesn’t mean it’s any less enjoyable. The tale of a unique friendship and the hardships that the main characters encounter is sure to leave children and adults emotionally attached and involved in the adventures that unfold. And while the 2006 “The Fox and the Hound 2” is typical of a direct-to-video sequel, with less care given to the animation and story, the new two-pack 30th anniversary home Blu-ray / DVD release offers a good look at both films, though with fewer extras than fans would like. 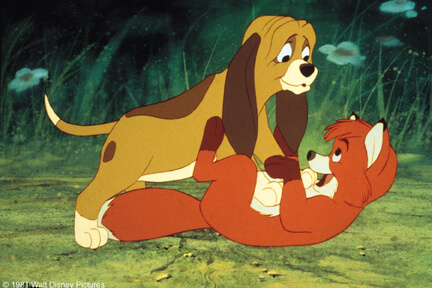 Upon popping in the new Blu-ray release of “The Fox and the Hound,” it’s immediately clear that this release is an improvement. While not nearly as crisp and bold as recent high-definition releases of late-80s / early-90s animated films, the film is cleaned up nicely, completely free of dust, scratches, and flicker. From the minute the movie begins, it’s obvious that it’s a child of the ’80s, from the fonts used to the voice cast (Mickey Rooney, Kurt Russell, Sandy Duncan, Corey Feldman) to the overall look and feel of the art. But the Blu-ray release takes the 30-year-old film and brings it – almost- up to today’s standards, with the picture looking a bit softer.

“The Fox and the Hound 2,” on the other hand, looks completely modern, as it should, being only 5 years old. The animation style is far different from the original, with a more glossy look given to the designs of the characters and the world that surrounds them. The result looks good on Blu-ray but ultimately provides a less warm feeling than the classic style. 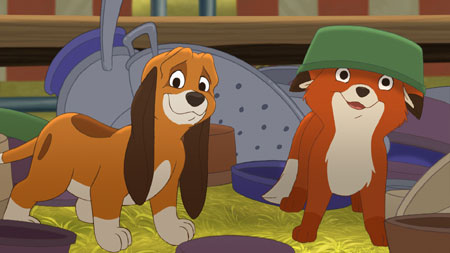 The audio of the more recent film is far superior to the dated-sounding voice recordings of the original. There is only so much enhancing that can be done to decades-old audio, leaving much of the dialogue and music of “The Fox and the Hound” sounding slightly scratchy and muffled. But it’s not enough to ever be distracting.

Despite this being a 30th anniversary release of “The Fox and the Hound,” very little special treatment was given to the film in the way of bonus features. In fact, the only new high-definition extra to come with this new release is a short Disney Channel-esque piece called “Unlikely Friends,” about unexpected real life animal friendships. The standard definition making-of featurette “Passing the Baton” is far more interesting and entertaining, but is also not new. It offers excellent interviews with famous names from Disney history, emphasizing the notion that this film marked the transition between Walt’s “Nine Old Men” to the new generation of animators that would go on to produce some of Disney’s timeless classics. But even this extra feels like a piece of history, as some of the interview subjects have since passed on. “The Fox and the Hound 2” standard definition extras focus on the music of the film, as there’s little else to say about the making of the movie itself.

Fans of “The Fox and the Hound” won’t find a better home release of this film than the new Blu-ray version. While not perfect, it’s now the best way to enjoy a Disney film that goes down in history as preparing a talented group of young animators to create what became a new age of animation. And those who have never taken the time to watch this often-forgotten film should take this opportunity to enjoy it in its best quality release to date. 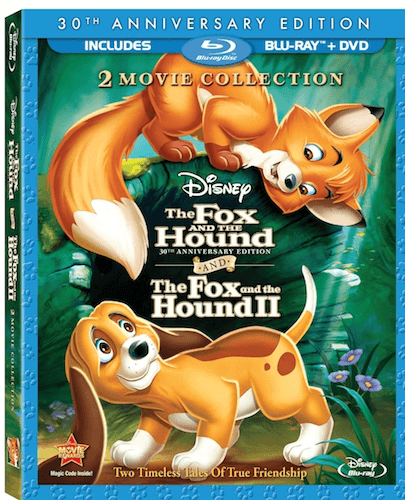 Comments Off on Review: “The Fox and the Hound” 1 & 2 Blu-ray DVD Combo Pack – Two friendship stories paired up to come home