On May 27, 2011, Busch Gardens Tampa Bay officially opened its newest attractions, the unique Cheetah Hunt roller coaster and Cheetah Run animal exhibit. The pair work together to offer theme park guests a chance to not only experience an exciting new ride but also take in sights and information about the world’s fastest land animal. 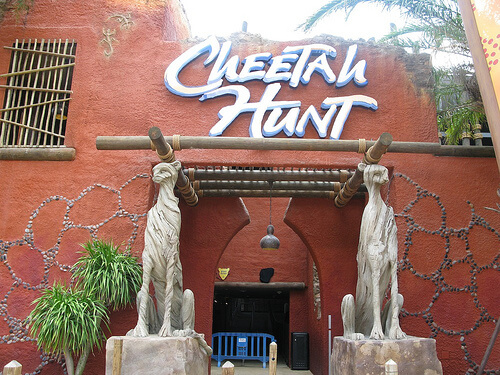 A day before the public opening, I had a chance to attend a preview of Cheetah Hunt, its new surrounding area, and the Cheetah Run exhibit as well as chat with some of the experts who created it all.

To learn a bit of background about Cheetah Hunt and Cheetah Run, watch our video below, which includes interviews with Busch Gardens VP of Design and Engineering Mark Rose and VP of Zoological Operations Mike Boos:

Out of this world inspiration for Cheetah Hunt

Mark Rose also shared with me an interesting story of how the initial concept for Cheetah Hunt came about. It actually began long before the moment he described in the video above of reintroducing cheetahs to Busch Gardens. Six years ago, Rose was watching Star Wars Episode VI: Return of the Jedi and found inspiration when watching the scene “when they’re on the planet where the Ewoks are and they stole the speeders, speeding through the forest, chasing each other.”

Rose continued, “I’m thinking, ‘Could I build a roller coaster that’s close to the ground, going in and out of environments? And to do that I’d need technology that would launch you. I could build the environments. It could be through bamboo, or a forest, or through a canyon, or a raging river, or whatever – I could build those kind of environments if I could get it close to the ground. So that was my first idea.” While the end result certainly isn’t a Star Wars roller coaster (you’ll have to look to Disney’s newly-revamped Star Tours for anything close to that), the notion of speeding along the ground and through tight areas still

The launch of Cheetah Hunt has not been without opening day jitters. This new roller coaster was plagued a few technical difficulties during its preview day, which continued into its public grand opening on May 27, and have prevented it from operating for many hours at a time. During opening day, Busch Gardens explained the downtime on Twitter, “High performance coasters rely on sophisticated, finely tuned parts. Sometimes mechanical delays are a fact of opening day.” And that is completely understandable. Busch Gardens continued to use Twitter to keep waiting fans updated. “The safety & comfort of our guests is always our primary concern. We thank our guests for understanding as we work to get Cheetah Hunt…” It was a similar waiting game on preview day. But after hours of hoping and waiting, problems were eventually resolved (on both days) and Cheetah Hunt was open. 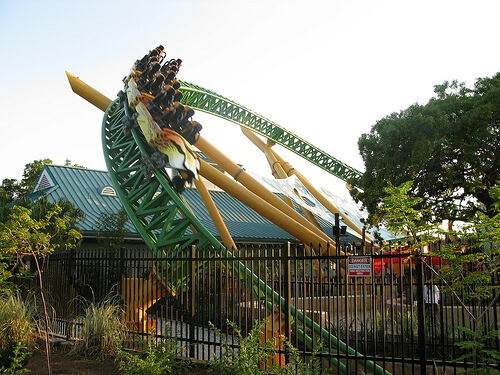 Fortunately, for Busch Gardens, for riders, and for me, Cheetah Hunt is a fantastic new attraction. It’s entirely unique, offering an experience completely different from any other coaster in Central Florida. Moreover, the downtime on preview day offered me the chance to ride the park’s other big coasters, Montu, Sheikra, and Kumba, just before riding Cheetah Hunt for this first time – a great way to compare. Kumba is an old steel coaster that shakes, roars, and tumbles its way through, leaving riders dazed. Sheikra is designed to thrill, with its steep drop at the beginning pulling screams from even the most experienced coaster fans. Montu pulls riders around tight turns, with feet dangling and flailing all the while. Cheetah Hunt… is unlike any of that.

Before we get into my thoughts about the ride’s specifics, you can hop into its cheetah-themed cars and take a couple of spins for yourself in the videos below.

Cheetah Hunt POV ride in the back row: 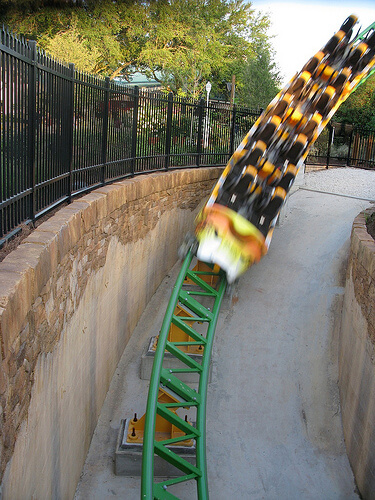 Cheetah Hunt seamlessly combines thrilling elements with gentleness and serenity that I didn’t think a coaster of this size could achieve. Upon hearing that the movements of the ride are inspired by and based on those of a cheetah as it stalks and hunts its pray, a lot of eye-rolling may happen, with doubt that a mess of metal could ever compare to the grace of a wild animal. But somehow it works. The initial launch out of the loading area building is marked by the audible sound of a cheetah’s roar. Riders get a sense that they are now on the prowl. But much like prey is unpredictable, Cheetah Hunt never makes it obvious to which direction it’s headed next. And even those on the ground will never hear it coming.

Despite having three launches reaching up to 60 mph and roaming more than 4,000 feet of track, Cheetah Hunt is not a loud beast like Kumba, but instead nearly silent. If it wasn’t for the launch-time cheetah roars and the excited screams of riders on board, those nearby may not even realize there was a roller coaster around. It’s just another element that adds to the nature comparison. Surely a cheetah in real life needs to be silent until those sprinting attack moments. 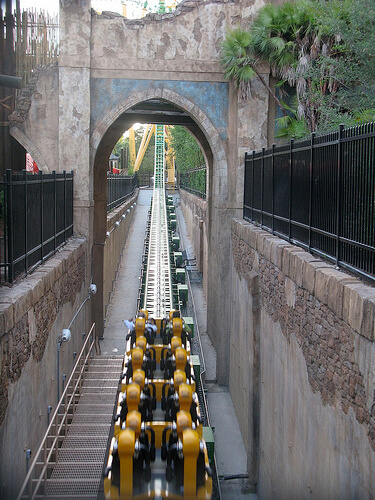 As ride the progresses through tight turns and dives, the overall thrill level stays low but excitement is quite high. The launches are the most thrilling part of the ride, with everything in between offering a smooth ride through some of Busch Gardens’ most beautiful areas. After the second launch, riders are sent high above the theme park streets as the coaster enters a slow-paced figure-eight, offering guests a chance to look around and take it all in. But that overview quickly disappears as riders plummet downward into what I found to be the most unique and entertaining portion of the ride, as the coaster jets just above a riverbed, past a waterfall, and winds back and forth between rocks before leaping over a hill. This portion of the ride is most like a cheetah’s own movements, as if dodging bushes, leaping over a rock, and ultimately landing with a clear shot at catching its prey. In the end, one final sprint will land that cheetah its dinner and for riders, one final launch offers a last thrill before the ride aboard Cheetah Hunt is over.

Thrill seekers may not find Cheetah Hunt as exciting as Sheikra or Kumba, but the average Busch Gardens guest will likely soon name Cheetah Hunt as their favorite ride in the park. It’s certainly mine. It’s a perfect blend of thrill, entertainment, stunning views, and quick twists and turns. And all the while, it never once is painful to ride. Every movement is perfectly calculated for efficiency, comfort, grace, and precision. And to me, that makes an ultimate ride.

Cheetahs, running or not

Within the entirely new area of Busch Gardens created for Cheetah Hunt also sits Cheetah Run, a viewing area designed to get up-close encounters with cheetahs as well as to provide a long stretch of land on which they can show off their speed. But it seems cheetahs are not entirely unlike humans. When it’s hot out (and it often is in Florida), there isn’t a whole lot of running going on. 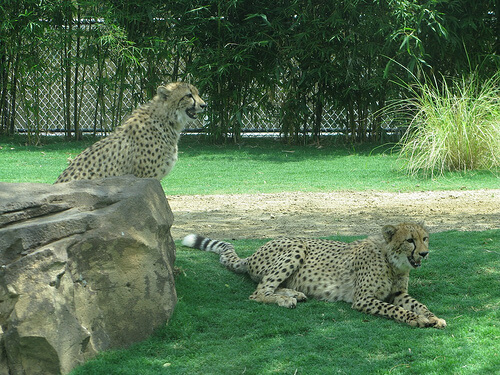 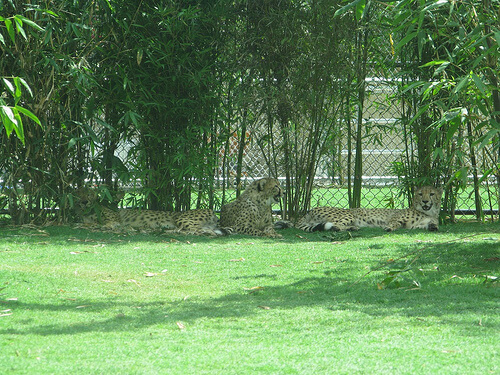 I arrived to preview day for the new attractions at 1:30pm and quickly found out that the cheetahs were far more interested in sitting or pacing in the shade than running. In fact, there had only been one or two actual runs that day with no more scheduled. And that may be the case when you arrive to. While the area is technically called Cheetah Run, it’s likely that very little running will be seen. 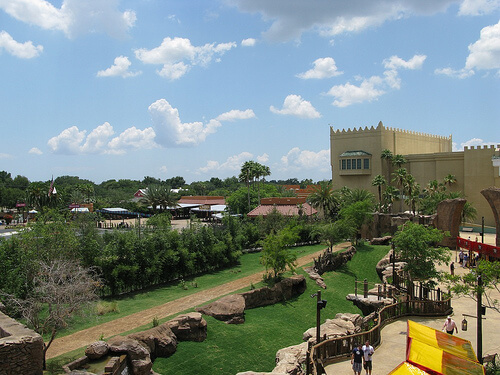 There is a schedule posted for cheetah presentations, but even those won’t necessarily involve the lure being brought out to entice a full speed run. It all depends on the cheetahs’ moods. I was disappointed that I wouldn’t get to compare the speed of the nearby coaster to that of its namesake creature, but still enjoyed watching the animals slowly roam through the many open air and glass viewing areas. A handful of monitors and signs offer information about cheetahs, but I found it impossible to take my attention off of the animals long enough to pay attention. They are interesting to watch, running or not. But I’d still prefer to see them run. 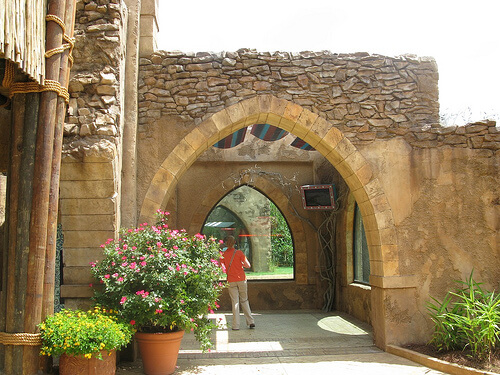 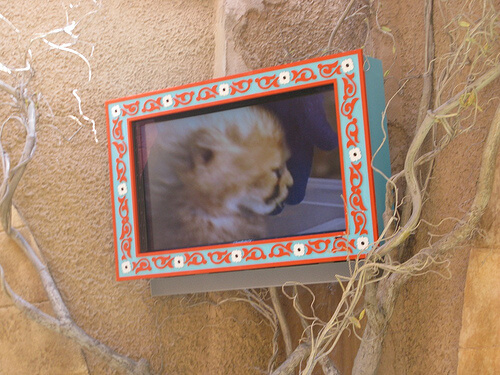 As I mentioned above, nearly the entire Cheetah Hunt / Cheetah Run area is new to Busch Gardens. The main Cheetah Hunt queue and load building is re-themed and repurposed from the old monorail building. Alongside is an entrance to the Skyride, which still operates and even intertwines with the Cheetah Hunt track at one point. The former Clydesdale horse barn has been converted into the new housing area for the cheetahs. 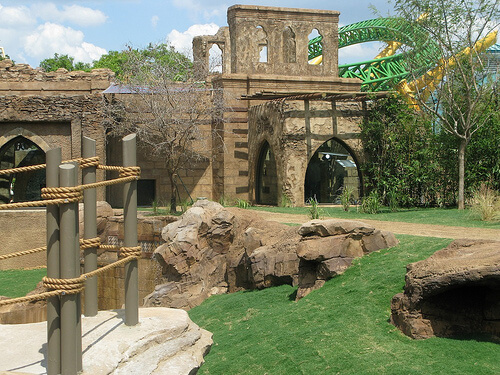 Beyond those buildings, everything else is completely new, acting as a “crossroads” between other older areas of the park. Hints of Egyptian and African themes make their way into this area as a result, surrounded by plenty of green landscaping. If you didn’t know better, you’d say the whole area had been there for years. It fits in perfectly.

In addition to Cheetah Hunt and Cheetah Run, other entertaining details have been added to the park. An attractive cheetah topiary is centered between the two attractions. 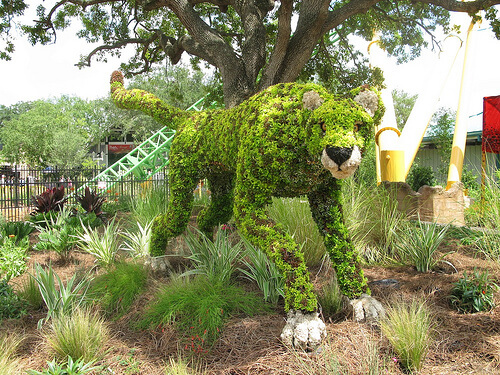 And speaking of attractive, roaming occasionally through the area are a new group of entertainers that are sure to be popular. 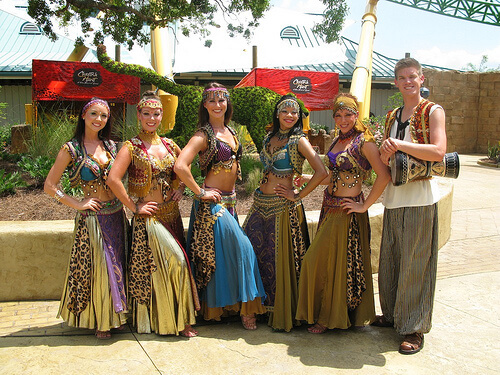 Throughout the semi-indoor Cheetah Hunt queue (open-air building, no air conditioning), Busch Gardens has placed facts about cheetahs and the ride itself. There are enough to satisfy any curious (or bored) guest. 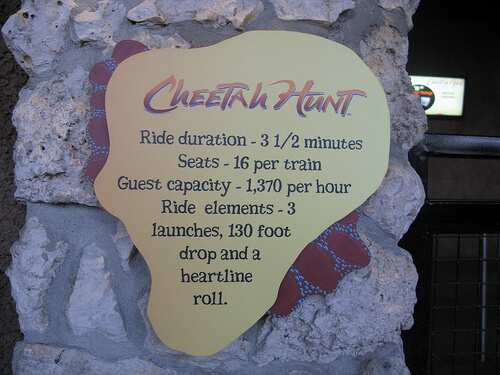 The centerpiece inside the queue building is a giant rockwork cheetah, designed to look as if it had “always been there.” 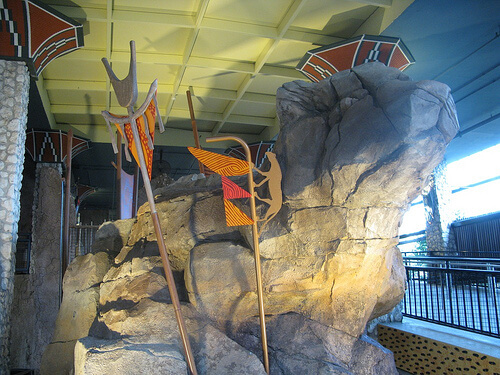 And after riding, the obligatory gift shop features on-ride photos available for purchase along with a myriad of Cheetah Hunt merchandise. 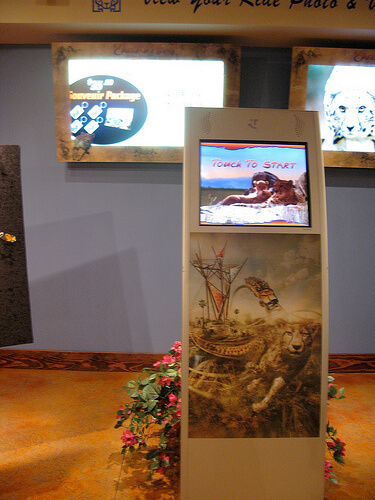 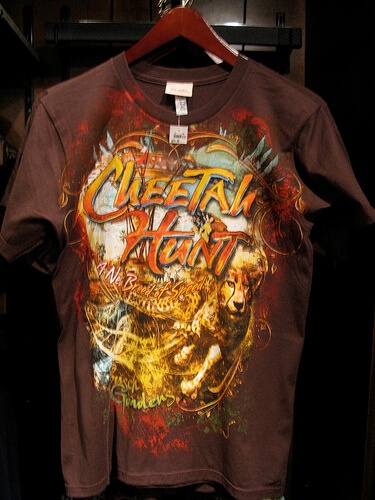 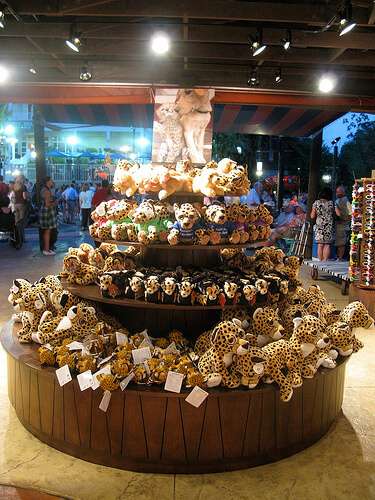 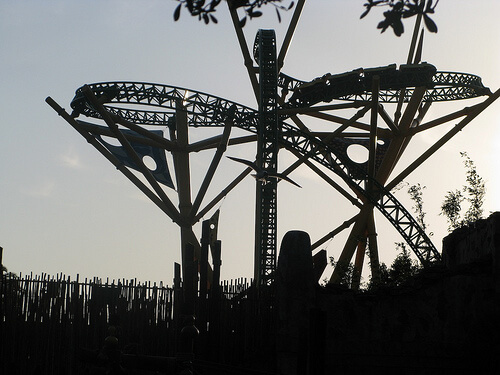 Cheetah Hunt has come a long way since we toured its construction site a mere three months ago. What was then nothing but dirt and track is now an attractively landscaped and decorated area that’s home to one of Central Florida’s most unique and entertaining roller coaster experiences. There’s more to Cheetah Hunt than big drops, fast launches, and tight turns. It took inspiration from a real life animal and embraced it to perfection, emulating an experience unlike any other in the area. And the real cheetahs nearby serve as a constant reminder of what Busch Gardens is all about, combining nature with man-made thrills into exciting and unique fun for the whole family. Once the opening day technical difficulties are worked out, nothing should stop anyone from rushing out to take a spin on Cheetah Hunt.

More photos from Cheetah Hunt and Cheetah Run at Busch Gardens:
(All photos by Katherine McElroy)