The cover story of the Mickey Monitor Summer 2011 edition features a preview of the upcoming ride update, Star Tours: The Adventures Continue. Inside, Walt Disney World annual passholders are given a sneak peek of what is soon to become one of Disney’s most popular attractions.

The cover of the issue features the new Starspeeder 1000 making tight maneuvers to get away from a laser-blasting AT-AT on the ice planet Hoth: 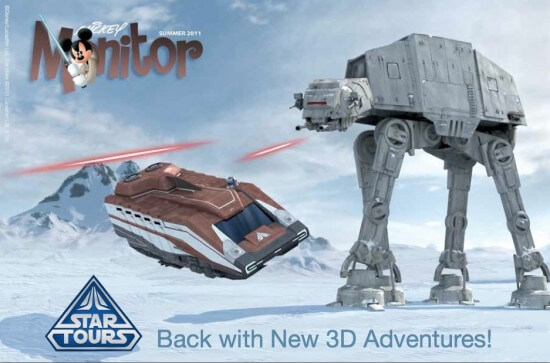 Inside, the article reads:

Where will the Force take you?
Star Tours is back with new adventures!

The all-new adventures of Star Tours® are set to begin on May 20, 2011, taking you even further into the Star WarsTM universe! You’ll have the chance to see some of your favorite characters, C-3PO and Darth Vader included! Along with the familiar characters, you’ll also get to travel to some awesome, new destinations! Here’s how Walt Disney Imagineers (with a little help from the Force) made it all possible.

In order to re-imagine Star Tours, Imagineers first had to make a decision: What planets should Guests be able to visit? Tom Fitzgerald, Executive Vice President and Senior Creative Executive of Imagineering, said that “When George was working on Episode I, we went to him and we developed an entire storyboard for the show around the podrace. At the end we stepped back and said that if we’re trying to create the ultimate Star Wars adventure, then why do we have to use just one?” This opened up a whole new galaxy to Guests. Added Tom, “Every time you come back, something new will be there for you to discover.” Imagine the possibilities. You can glide among the trees with Wookiees on Kashyyyk. Kick up some sand across the desert in a podrace on Tatooine. Submerge into the lake waters of Naboo. Weave through the busy city planet of Coruscant. Blast through the blizzards of Hoth. Or, you might even go inside the Death Star!

Droids. A princess. And who’s that guy in black?

Along with the all-new adventures that you can experience, now you’ll never know which of your favorite characters you’ll see! For instance, C-3PO and R2-D2 will be there to help get you through the galaxy in one piece. At least we hope so. And along with the duo of R2-D2 and C-3PO, you might also get the chance to see Princess Leia and everyone’s favorite baddy with a heavy breathing problem, Darth Vader!

Don’t miss your chance to visit some of your favorite planets in that galaxy far, far away! Star Tours®—The Adventures Continue opens during Star Wars Weekends at Disney’s Hollywood Studios®. Flights will be departing daily!

Accompanying the article is a closer look at the Starspeeder 1000 taking guests past the under-construction Death Star, evading TIE Fighters: 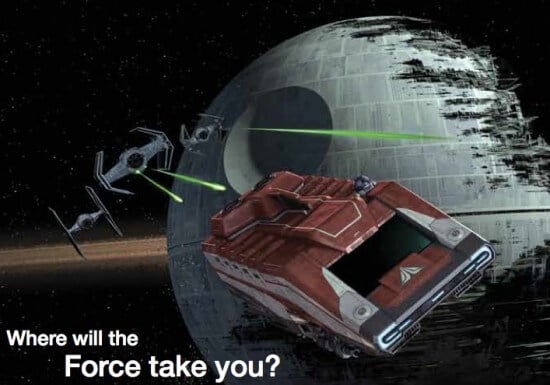 In the updated world of Star Tours, we find some of our favorite characters in the middle of the action! Here’s what’s happening to them:

R2-D2: Artoo knows a secret plan about Star Tours, one that he hasn’t even told C-3PO!

PRINCESS LEIA: The princess is just realizing the importance that Star Tours could play in the defeat of the Empire.

Tucked away in the Calendar section of the back of the Mickey Monitor are the following details of an upcoming giveaway:

No details are available on the passholder site yet, but these dates coincide with the third weekend of Star Wars Weekends, so it’s possible these special free passholder lanyards will relate to Star Wars and/or Star Tours. And if so, they’ll likely disappear at light speed.

Walt Disney World annual passholders should receive their copies of the Summer 2011 Mickey Monitor in the mail soon.