First-ever Orlando Food Truck Bazaar draws thousands, becomes victim of its own success - Inside the Magic

If upon arriving at a restaurant you were told the expected wait time to eat was more than 3 hours, you’d likely turn around and leave. But that’s how long I stood in line last night to eat at the Orlando Food Truck Bazaar, put on by TheDailyCity.com. I was one of hundreds – nay, thousands – who arrived a few blocks south of downtown Orlando to enjoy the spreading phenomena that is food truck cuisine. But no one expected the crowd that showed up. 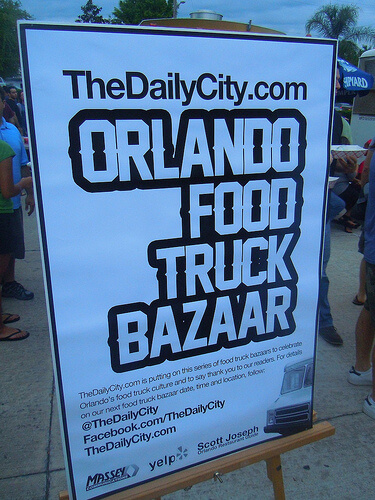 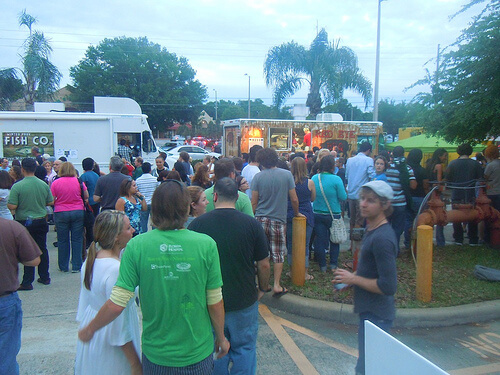 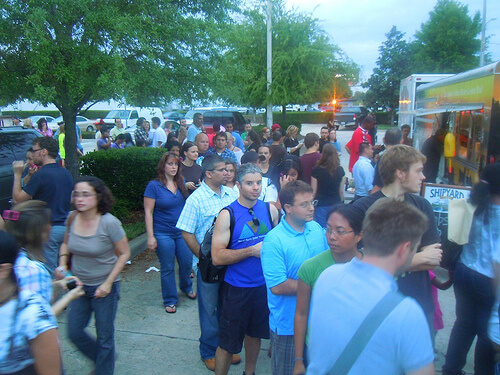 It was a sea of people in every direction. Organizers of this first-ever event predicted attendance of 400-600 people, but when the event began at 7pm, more than that many had already lined for the 9 food trucks set up in a church parking lot. The event was scheduled to last 3 hours and with lines creeping along, hundreds were turned away or simply gave up. But those who stuck around were treated to beautiful weather, enjoyable spontaneous conversation, and (eventually) some good food. 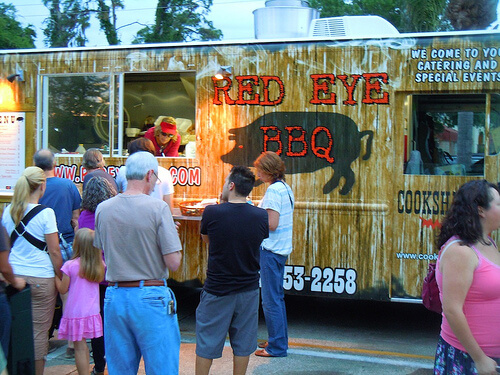 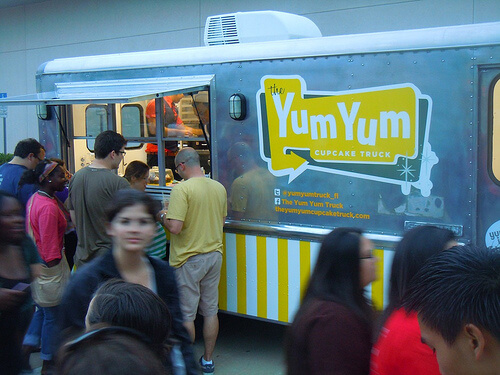 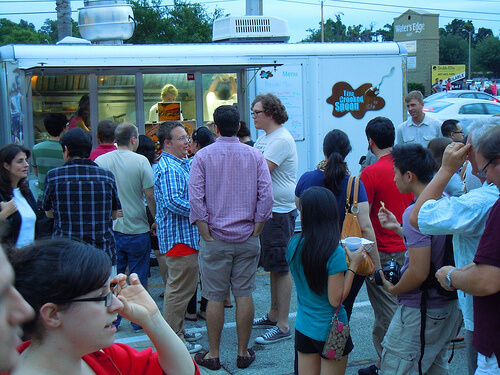 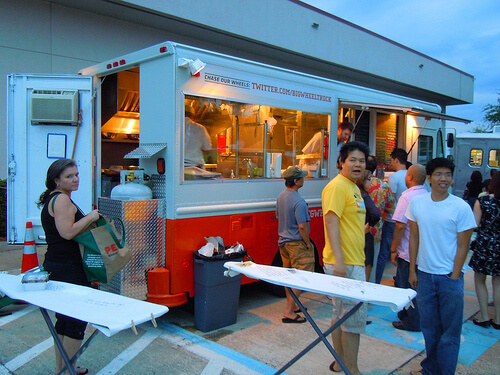 The event was free to attend, but not free to eat, with each truck charging their own low prices for unique cuisine. Trucks serving included Big Wheel Provisions featuring local ingredients and more “upscale” cuisine, The Crooked Spoon offering American food “with a twist,” Red Eye BBQ, The Taco Lady, The Yum Yum Cupcake Truck, and Korean BBQ Taco Box, which is where I finally found food.

No one expected the lines to move quite as slowly as they did. Those who showed up to the event early had the opportunity to sample food from a few trucks, but the vast majority wound up stuck in one line for the entire night. The Korean BBQ Taco Box line was my home for more than 3 hours, inching along as food was prepared to-order. After having driven 30 minutes to reach the South Orange Ave location, I wasn’t about to leave without food, even if it meant standing in line all night. (And it did.)

While I waited (and waited… and waited…) for Korean BBQ, my wife split off to grab some cupcakes from the Yum Yum truck. Their line moved quickly and she managed to snag 6 cupcakes (to take home), including their last chocolate. This truck ran out of food before any of the others, as all of their cupcakes were pre-made with the expectation of a few hundred people showing up, not thousands. 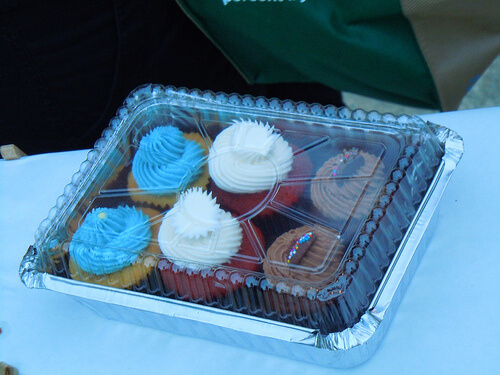 Earlier, I spotted John from The Disney Blog at the event, and he offered me a taste of food he grabbed from Big Wheel Provisions, including tempura veggies and rather ordinary tater tots, accompanied by some flavorful dipping sauces and a bit of foie gras. It certainly wasn’t your typical food truck fare. 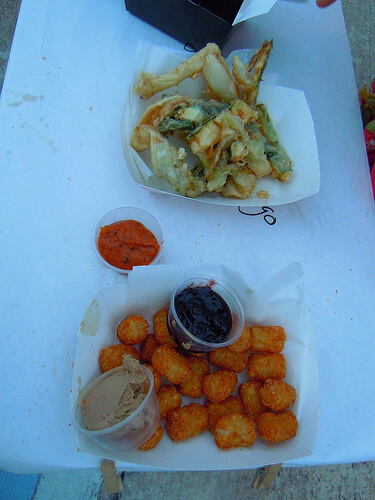 More than two hours later, still standing in line for Korean BBQ, a couple bites of the above was the only food I had eaten all night, so it was a welcome treat when the nearby Crooked Spoon truck (having run out of most of their food) came down the line handing out free cups of potato salad. It was a nice gesture and my stomach was happy to finally have something in it. 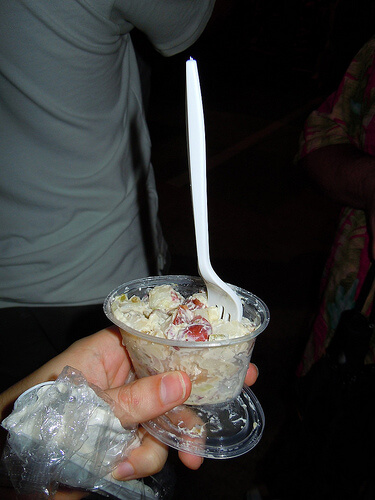 In the end, I was rather lucky, as I was one of the very last people to be served off of this truck before they were forced to close. The event was scheduled to run until 10 p.m., but trucks stuck it out until 10:30 p.m., provided they didn’t run out of food. By this time, there were still 75-100 people in line for the Korean BBQ Taco Box truck, all of whom had been waiting 1-2 hours. It wasn’t pleasant to watch as they were told they wouldn’t be getting any food.

The environment was chaotic nearing the end, with food supplies running low and time ticking away. I didn’t get what I ordered, as the Korean BBQ Taco Box truck had run out of beef and chicken, leaving only spicy pork. But after waiting in line for 3 hours, I simply didn’t care. After much confusion and 3 hours of standing, I was finally handed a spicy pork taco and a spicy pork sub, each just $5. 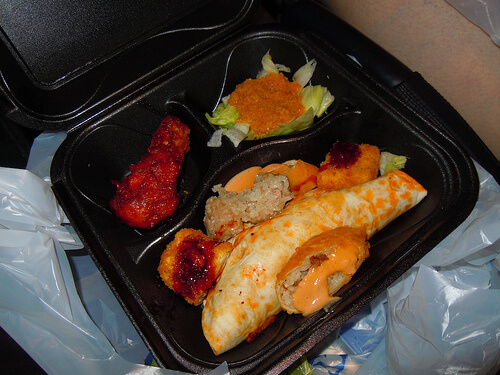 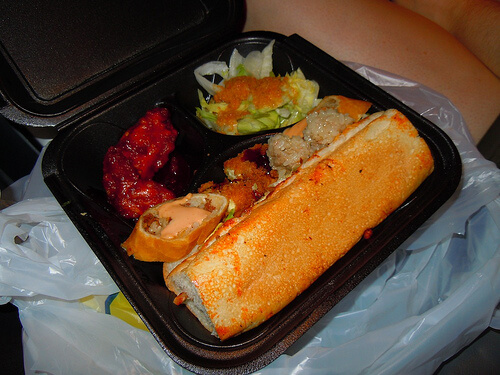 The best news of the night is that the food was fantastic. I could see why the line moved so slowly, with each component of the meal perfectly prepared and presented. No corners were cut to crank out food faster, offering a quality meal for the few who made it through the seemingly endless line. And for just $5 per meal, the quantity of food given was incredible, leaving plenty left over for lunch.

Over three hectic hours, nine food trucks did their best to keep up with demand that far exceeded expectations. For attendees who left with full stomachs, the night was a mixture of frustration and satisfaction. For those who left without food, only the former remained. The event’s organizers are already planning the next iteration of this Food Truck Bazaar, promising a bigger space and more trucks.

It’s clear from the turnout that Orlando has caught food truck fever. Fortunately, the very nature of food trucks allows enjoyment (with far less waiting) any time of the year, as these trucks are almost always available around town. Korean BBQ Taco Box is parked 7 days a week at a gas station on Colonial and Primrose – and it won’t require standing in line three hours to enjoy the food. For me, a second trip to this delightful truck only requires I visit the fridge, as leftovers from last night’s event are waiting.

Further information about the Food Truck Bazaar and its participants can be found at TheDailyCity.com.