The recent Infinitus 2010 conference at Universal Orlando offered some of the most-devoted Harry Potter fans from around the world a chance to have Islands of Adventure’s Wizarding World of Harry Potter to themselves during the “Night of a Thousand Wizards.”

The special after-hours event on July 16 began with a presentation given by Universal Orlando inside the “Eighth Voyage of Sinbad” theater, neighboring the Wizarding World within the theme park. Hosting the presentation was Donna Mirus Bates, Senior Vice-President of Marketing and Sales for Universal Orlando Resort, joined later by Wizarding World of Harry Potter show producer Paul Daurio.

A surprisingly large percentage of the attending crowd were revealed to be first-timers to Universal Orlando and while the presentation began with Bates informing the audience filled with Potter fans about other attractions found throughout the Universal Orlando resort, the luke warm reaction made it clear that the majority of this group was there to see the Wizarding World – and only the Wizarding World.

More than three years of anticipation built up since the official announcement of the Wizarding World of Harry Potter in 2007 and many of these fans have been watching Universal Orlando’s every move since, excited to discover each detail from the Potter-verse that would make it into the theme park expansion. The excitement has continued beyond opening day and well into the Night of a Thousand Wizards.

“It was a thrill to share The Wizarding World of Harry Potter with this group of fans as we have been with fans from all over the world since we opened,” Bates told me. “The comments and reactions have been incredible. I’ve experienced people bursting into tears on opening day, standing awe-struck with their mouths wide open at the first sight of Hogwarts, and grown adults giggling like children as they get their first Butterbeer mustache in Hogsmeade. They have told us that Harry Potter and the Forbidden Journey is the best ride in the world, and they are amazed by the attention to detail that went in to the entire land. It’s been very emotional for all of us involved in bringing this project to life.”

Emotions were certainly high throughout that night’s special presentation, with Bates even shedding a few tears herself while expressing her excitement to finally show off the Wizarding World project to the crowd that would appreicate it the most. And while fans I spoke with throughout the Night of a Thousand Wizards were delighted (an understatement) to walk through Hogsmeade Village and Hogwarts Castle, they weren’t ready to let any detail, big or small, slip through the cracks.

Sorting Through the Details

A question-and-answer session with show producer Paul Daurio followed Bates’ introduction and with the first asked question it was clear that these Potter fans weren’t going to be pulling any punches.

Stepping up to the microphone, an audience member asked, “Why is Ollivander’s in Hogsmeade?” She was referring, of course, to the fact that in the world Harry Potter author J.K Rowling created, Ollivander’s magic wand shop is actually located in a place called Diagon Alley, not Hogsmeade Village. But Universal was well prepared for this and many other “tough” questions from the fans.

About fielding audience questions, Bates said, “I was not at all surprised by the fans’ enthusiasm and I expected they would want to know about every detail of The Wizarding World of Harry Potter.” She further explained, “We knew the expectations of Harry Potter fans would be very high, and that they are only surpassed by our own expectations and standards. That’s why we worked very closely with Warner Bros. and the Harry Potter filmmakers to create an incredibly authentic experience that is true to the spirit of the books by J.K. Rowling and faithful to the visual look and feel of the films.”

So what is the official Universal response to the above “Ollivander’s” question? Bates replied, “We knew from the start [fans] would want to know why Ollivanders is in Hogsmeade, so I welcomed the opportunity to tell them that this was one of the liberties we were granted to ensure we could create a congruous theme park experience that included all of the Harry Potter story elements we wanted to present. We knew we wanted to build Hogsmeade, and we couldn’t imagine a Harry Potter experience that didn’t include the magic of Ollivanders, so this was the only solution. It was done with the support of Warner Bros. and J.K. Rowling.” And fans can’t argue with that.

More questions from the audience centered around specifics from the Harry Potter books and films. Why does the Wizarding World feature Zonko’s Joke Shop rather than Weasleys’ Wizard Wheezes? Again, it was Rowling’s decision to “bring the excitement” of the Weasley twins’ store to Hogsmeade Village by way of Zonko’s. 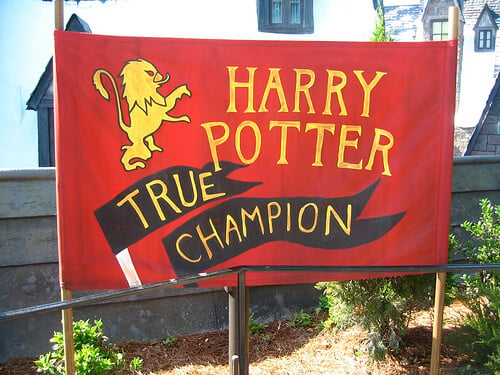 Faithfulness to the film series trumped thoroughness in the case of the Dragon Challenge attraction. Many fans, including one audience member on this night, have noted that there are no banners or signs posted in the attraction’s queue in support of popular character Cedric Diggory (played in Goblet of Fire by a pre-Twilight Robert Pattinson). Paul Daurio fielded this question himself, “I want to personally apologize for not representing for Cedric and the Hufflepuff house.” Big applause erupted from the crowd. He continued, “We literally took the exact film reference as our reference for the movie. Every single handmade banner you walk past on your path through the Forbidden Forest into the Dragon Challenge is from the scene in Harry Potter and […] the Goblet of Fire.” But in the end, Daurio admitted change is on the way, saying, “We plan to represent Cedric.” Even bigger applause.

Not all questions surrounded inconsistencies with the books and films. Some fans were more concerned with specific decisions made by Universal in designing the Wizarding World of Harry Potter. The most prevalent topic that I’m sure Universal silently wishes would magically disappear is that of size restrictions on the Wizarding World’s rides. It was the second question asked that night: “Why is it that the rides seems to have a problem with larger-sized people? We can’t ride two out of three of the rides.”

It’s a question many have been asking and one that media across the country have picked up on, covering countless stories of those who can’t fit onto the Universal rides. A response was offered by Bates: “The reality is when we create these rides […] we want to make sure that as many people can experience it as possible and to make sure that all of our guests are safe we have to design it such that there are restraints […] so like any of our other rides this one does have some parameters around it to make sure that everybody is safe. That’s really the reason.” In addition to citing safety reasons behind the restrictions, Bates also conceded that Universal tries to appeal to the majority of its visitors. She continued, “If we didn’t have the restraints, then some folks who are smaller wouldn’t be able to ride it, so it was really designed to make sure that the widest cross-section of the population could enjoy it.” Show producer Paul Daurio added that it was “a big challenge” to accommodate people from “90 pounds to 290 pounds.”

Another commonly-asked question surfaced on this evening: “Why aren’t there any actual characters from any of the books or the movies here?” The lack of walk-around versions of popular Harry Potter characters in the Wizarding World has left many a tourist confused, searching for photo opportunities. But Bates responded, “We really wanted to be very authentic and we thought a lot about the whole character thing and we realized Daniel Radcliffe is Harry Potter; Emma Watson is Hermione Granger. So it just didn’t feel right to us to have look-alike characters walking around.” Referring to the Forbidden Journey attraction, she added, “But you will get to meet Harry and his friends at Hogwarts and you will get to meet several of the other characters there as well. So we tried to bring the best of the movie magic to the experience without departing from that authenticity that we strived for.”

One fan at the event wondered if Universal would ever consider adding hotel rooms inside Hogwarts Castle. But Bates explained the castle was created using “forced perspective” and that the seemingly-epic size of the castle would be ruined by wandering up to its towers, calling it a “movie making trick.” And that it is. A quick look at an aerial view of Hogwarts Castle / Harry Potter and the Forbidden Journey immediately reveals the conceit. (Yep, it’s that big white building with the surprisingly small castle facade affixed to one of its corners.)

Back on the subject of Dragon Challenge, one fan asked, “I’m just wondering if there’s any way you can paint the roller coasters so it looks more like the actual dragons from the tournament?” Having been re-themed for the Wizarding World from the old Dueling Dragons ride, the queue underwent a makeover but the ride’s track remained largely the same, still sporting the red and blue “fire” and “ice” colors of its predecessor. Bates simply replied, “We will definitely take that into consideration.” In other words, we’ll be looking at these track colors for a while.

In the end, fans wondered if the Wizarding World of Harry Potter is now complete or if there is more on the way. When asked if there were other attractions considered for the area but not built, Daurio replied, “If I told you the things that we thought about that we could not create, it would only make you want more – which we’re going to reveal hopefully some day in the future.” Bates was simply happy to finally have the Wizarding World open. “For right now, we just really want to enjoy what we have and make it the best that it can be,” she told the audience. “Never say never on something else but this is only about a month old so we’re trying to just enjoy what we’ve got right now.”

Despite any concerns expressed by fans, the Night of a Thousand Wizards (and the Wizarding World of Harry Potter it took place in) was widely well-received by those in attendance. “We have received emails with thanks and feedback from attendees, and we’ve seen many comments and posts about what an incredible time everybody had,” said Bates. “We delivered a great experience for this group, and are expecting them to return in the future.”

This event was unique, having been the first private event held inside the Wizarding World since it opened on June 18. But it likely won’t be the last. Given the popularity of the new theme park addition, having the whole area reserved for a private party is any Potter fan’s dream. Anyone interested in finding out more about how to book the Wizarding World for an after-hours event should visit UOMeetingsandEvents.com or contact Universal Orlando’s Sales & Event team at 1-888-266-2121. While future events likely won’t include a Q&A with one of the Wizarding World’s designers, Bates explained, “Universal Orlando’s Events team can offer private events outside of park hours within The Wizarding World of Harry Potter, including access to Harry Potter and the Forbidden Journey, the Three Broomsticks, Hog’s Head pub, and other attractions and shops. There are also a variety of themed catering options available.” And if a group is too large to stay contained within the Wizarding World, other areas of Islands of Adventure can be made available as well.

More photos from the Night of a Thousand Wizards: