With Halloween season rapidly approaching, theme parks will often go to great lengths to spread the word about their special events. In promotion of Howl-O-Scream 2010, Busch Gardens Tampa Bay today delivered a severed finger to my door, enclosed in a jar, and wrapped and skewered by a guitar string: 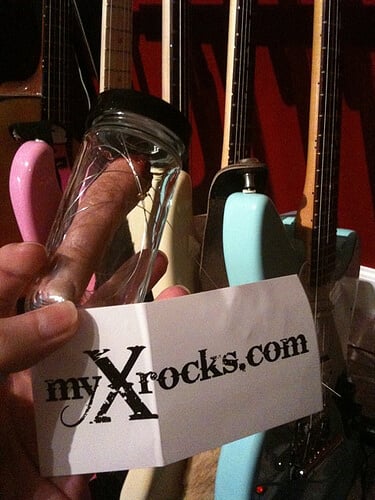 (Those are my guitars in the background – except the pink one. That one’s my wife’s.)

Packaged with it was a sticker for myXrocks.com, the address that forwards to the official web site for this year’s Howl-O-Scream event.

It’s been revealed that the theme of this year’s Halloween time event is to surround a rock band called My X, fronted by a girl named Sylvie. Apparently My X will be playing concerts throughout each night of Howl-O-Scream.

Update: Looks like the finger came from one of Sylvie’s ex-boyfriends. She says “revenge rocks” in the new Howl-O-Scream 2010 tv commercial:

I wouldn’t want to break up with her.