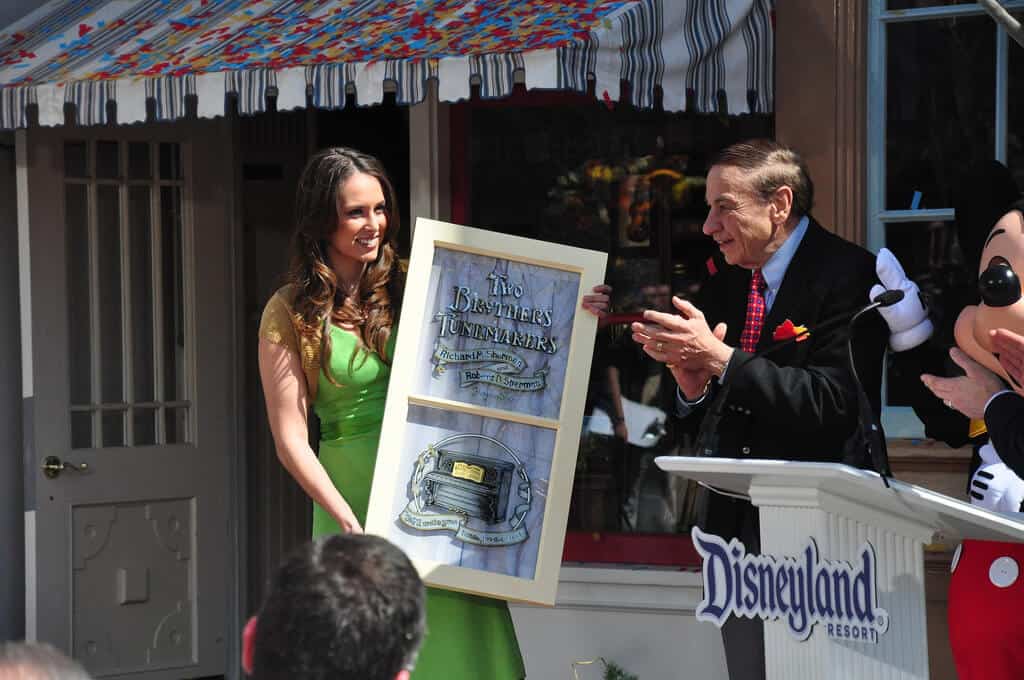 When Disney says they like to honor those who have helped make their movies, television shows, and theme parks so successful, they’re not kidding.

On March 11, 2010, the songwriting Sherman Brothers were honored at Disneyland by receiving their own window on Main Street USA – a tribute bestowed upon only the most worthy contributors to Disney history.

As part of the roughly 45-minute ceremony, the Sherman Brothers were praised by, amongst others, Disneyland Resort President George Kalogridis and former Imagineer and Walt Disney’s speech writer Marty Sklar. But the best entertainment came in the form of two actors who emerged as the lead characters (mother and father) from Disney’s Carousel of Progress attraction. They hilariously performed a fantastic medley of some of the Sherman Brothers’ biggest hits from Disney’s theme parks and beyond.

Finally, after unveiling the new window, Richard Sherman spoke and performed “Feed the Birds,” a song from “Mary Poppins” and Walt Disney’s favorite. It was a touching moment that no one in attendance will soon forget.

Here is a look at the window ceremony in a few more videos:

First, a slightly-edited-for-time video of the majority of the ceremony, including Marty Sklar’s full speech, the window unveiling, and Richard Sherman’s speech and performance:

Or if you only want to watch Richard Sherman sing “Feed the Birds,” here’s a clip of that performance:

And finally, a short interview with Richard Sherman asking how two brothers can work so well together for so long:

Finally, don’t miss our gallery of photos from the Sherman Brothers window ceremony:

Big thanks to Jeremiah and Josh Daws for covering this special event for Inside the Magic.