How Disney's Adaptation Preserved Pooh's Creator - Inside the Magic 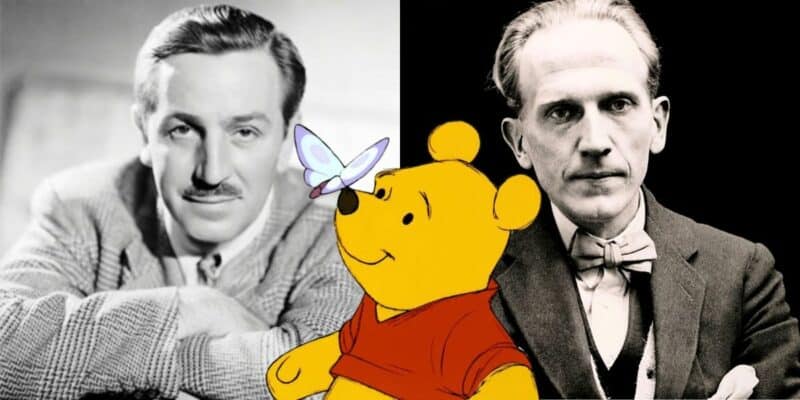 While it might be better recognized as “Winnie the Pooh Day,” January 18 is also the birthday of famed British author, poet, and essayist A.A. Milne. Although only a niche audience might be familiar with The Red House Mystery, The King’s Breakfast, and It’s Not Too Late, nearly everyone whose ever been remotely exposed to the Disney name instantly recognizes the chubby little cubby all stuffed with fluff, Winnie the Pooh.

Considered by many to be one of the most prominent figures in English literature, Winnie the Pooh can stand alongside other figures like Peter Pan, Aslan, and even Harry Potter, but he more than likely wouldn’t have been as popular worldwide if it wasn’t for Walt Disney’s interest. The original Winnie-the-Pooh books have continuously been in print for nearly a century, and he continues to delight children around the world on the page, on the screen, and even on the stage. Although Milne’s literary work is the foundation on which the Hundred Acre Wood is built, it’s Disney’s version that remains the most recognizable.

A.A Milne is widely considered one of Great Britain’s most prolific writers, as his stories, poems, and plays, but it was undeniably his children’s books that won him his lifelong acclaim. However, Milne’s original stories weren’t as familiar to American audiences as they were to those across the Atlantic. Enter Walt Disney who acquired the rights to Winnie-the-Pooh from Milne’s widow and estate in 1961. The result was a series of short films that would later be evolved into The Many Adventures of Winnie the Pooh in 1977.

Debuting a full two years before Walt’s famous mouse, Disney had interest in the silly old bear for many years, and his adaptation of Milne’s book is surprisingly accurate, pulling a generous portion of its dialogue and even some of its songs from the original text. Many armchair scholars might be quick to debate adaptations, but Paul J. Hale of the Cinema Story Origins podcast gives a much better analysis of the books and their author, as well as Walt Disney’s relationship with the work. Needless to say, both are equally adored by their respective audiences.

Since then, Pooh has become one of the most beloved and recognizable characters in fiction. Those planning on celebrating Winnie The Pooh Day this year might want to pick up A.A. Milne’s books as well as Walt Disney’s animated masterpiece. A pot of “hunny” might also be a welcome addition as well.

How were you introduced to Winnie the Pooh? Tell us in the comments below!