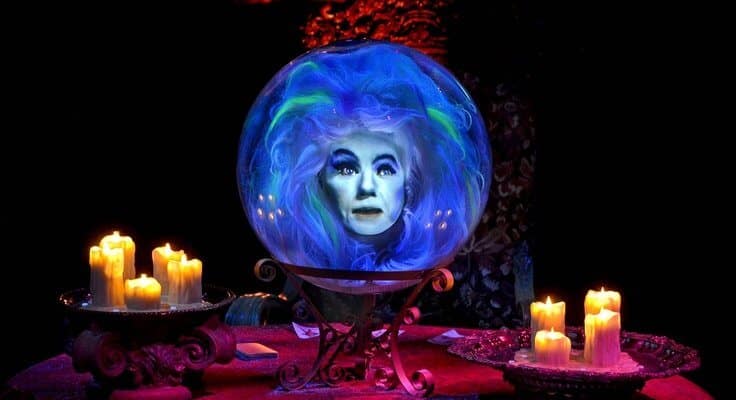 The Haunted Mansion is home to creepy old crypts, singing statues, a horseless hearse, and 999 Happy Haunts coming out to socialize, but the two American versions offer different flavors of frights for their Guests and permanent residents. Some are subtle, but others are delightfully ghoulish.

Disneyland’s version of the Gracey Manor might be the original attraction, but the variation seen in Walt Disney World’s Liberty Square has been with the resort since opening day, and it has its own freakish flavors to offer its Guests. While both attractions feature a similar flow and structure, the version in Florida offers a little bit more than the original in California. In short, the Florida version is Haunted Mansion 2.0, offering more content before and after the ride begins, but with that same framework brought over from the premier version from Disneyland.

For instance, the interactive graveyard queue is a Walt Disney World exclusive and a great example of Disney’s penchant for environmental storytelling. As Guests weave their way through the queue, they can solve a murder mystery, play with ghostly instruments on a musical mausoleum, and even help a stumped ghost writer finish her poems. The Disneyland version simply brings guests through the door, but the Walt Disney World version takes them on a journey.

Perhaps the biggest differences between the two attractions is simply that the Florida version is the longer of the two, having more rooms that are absent from the original attraction. The library, the piano chamber, and most notably the winding staircase are all original additions to Walt Disney World’s incarnation. It should also be noted that the iconic “Swinging Wake” in the graveyard scene is also longer with more spooks and surprises lurking among the tombstones. Additionally, the iconic Hitchhiking Ghosts are far more elaborate and interactive, though the Disneyland version still has its original figures. In the end, it’s still the iconic Disney ride, just with some additional bells and whistles thrown in for a more unique experience.

No matter which manor it is, both are practically mandatory for the core Disney Park experience. Disneyland’s gothic southern plantation has its classic charms and original workings, and Walt Disney World’s has its more contemporary additions like the graveyard queue or the wandering staircase. Either way, both are recognized as Park icons, and they still share the fundamental features that make them so recognizable. From the stretching room to the Hitchhiking Ghosts, the Haunted Mansion remains the best place for thrills and chills in all of Disney.

Which one is your favorite version of the Haunted Mansion? Tell us in the comments below!