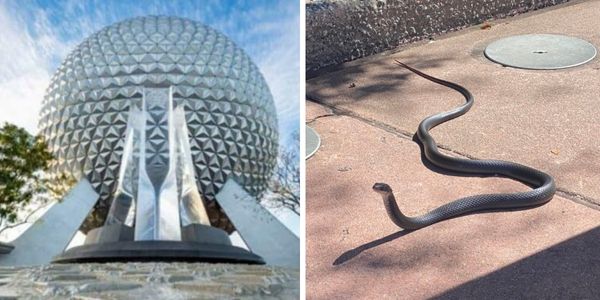 Even though Walt Disney World Resort is known as the “most magical place on earth,” sometimes even Disney can’t control natural occurrences like the weather and wild animals that inhabit the Florida area.

It is no secret that Disney Park Guests and Cast Members alike have reported sightings of both alligators and snakes from time to time at different spots at Walt Disney World, including at Magic Kingdom, EPCOT, Disney’s Animal Kingdom, and Disney’s Hollywood Studios.

Florida is notorious for its high humidity and intense heat, but it’s also infamous for its interesting collection of wildlife. The Orlando Resort was built on swamp land, so seeing a few creatures make sense, whether we’d like to see them or not.

It’s not super surprising to see a Cast Member fight off an alligator or snake at the Florida Resort, and just recently, Guests found a wild snake slithering around EPCOT.

A post went viral the other day on Reddit, a popular social media website, where a Guest showed a picture of a snake they found while visiting EPCOT. You can check out the picture below but be warned, it may trigger your fear of snakes:

Snake at Epcot from WaltDisneyWorld

This specific snake is a black racer, a type of snake that may look dangerous but is actually quite harmless if left alone. Still, just the thought of a  snake this large slithering around the Resort gives us the chills!

Going back in time a little bit, in 2016, a family sued Disney World after a snake allegedly fell from a tree and onto an elderly woman. The woman suffered a fatal heart attack, and the son was bitten.

Another wild snake was spotted entering the Gorilla enclosure at Disney’s Animal Kingdom last summer, with Guests capturing that experience as well. Just recently, a Disney Cast Member reported spotting a 10-foot snake sneaking through a line of more than 200 Disney Park Guests.

Have you ever seen a snake or other creature at the Walt Disney World Resort?