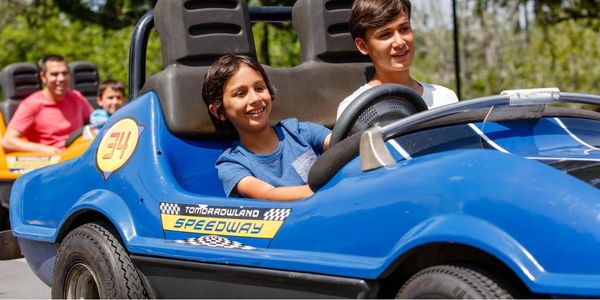 While the Disney Parks have a long and legendary history, this also means that the Parks and Resorts have encountered their fair share of issues, breakdowns, and incidents.

Recently, a historic Disney attraction faced a similar issue to that of Splash Mountain, except there usually is no water on this ride.

The Tomorrowland Speedway, called “Autopia” at Disneyland, is the only existing Tomorrowland attraction dating back to Disneyland Park’s opening day in 1955. It was brought to Disney World sometime later, and fans have been riding the miniature cars ever since. When the cars first took to the road, they captured America’s fascination with the latest transportation innovation, the “freeway,” but now, many would say the attraction is quite dated.

Over the years, the roadways and car styles have been updated, but the fun stays the same. The Tomorrowland Speedway is a fully-interactive experience that lets Guests of most ages drive actual “souped-up coupes.” This attraction is fun but quite tame by today’s standards. Regardless, the ride remains popular with both Disney World and Disneyland Guests to this very day.

However, this ride turned into a different type of experience recently after harsh storms swept the Resort.

It’s no secret that the Walt Disney World Resort has faced some truly intense storms as well as lots of flooding and lightning. Over the last few weeks, we have seen multiple examples of the intense amounts of rain at Disney World, with several attractions being evacuated. Some Guests found themselves in an unlucky position when the rain started – on board the Tomorrowland Transit Authority PeopleMover at Magic Kingdom.

This affected the Tomorrowland Speedway recently, and you can check out a photo of this incident down below:

As you can see, at least one portion of the ride was submerged in water. There was surely more of the track underwater, but this is the only photo that was shared online.

Usually, with outdoor rides such as this one, Disney will temporarily close them until the rain stops. But in a situation like this, a closure will last quite a bit longer.

Have you ever experienced an outdoor Disney attraction in the rain?