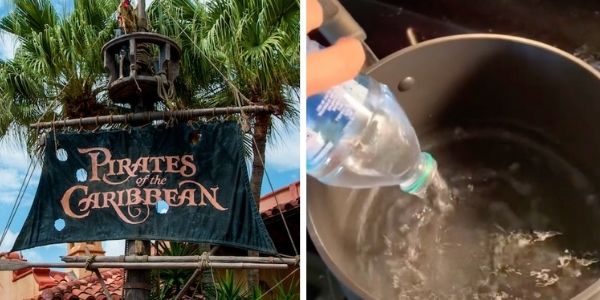 All of the Disney Parks and Resorts have passionate and dedicated fans that visit every year. From limited-edition merchandise to special events, there are certain Disney fans that just have to experience everything Disney offers.

Sometimes, however, this can lead Guests to do some things that are strictly not allowed. Sometimes, Guests will access an unauthorized area, or other times Guests will run to a store just to get that limited-edition item, pushing Guests along the way.

In the video below from @_disney._stuff_, one Guest took their dedication to the next level:

As you can see, a very passionate Guest was riding Pirates of the Caribbean at Disney World when they decided that they needed to actually taste the water from the ride. The Guest brought along an empty water bottle and scooped up some water.

The Guest then brought that bottle home and used it to cook. While there is no definitive proof that the Guest actually used the water to cook with, the Guest did scoop water from the ride which is definitely against Disney’s rules. Anyone who has visited any theme Park knows that the number one rule for all Guests is to keep their hands, arms, feet, and legs inside the ride at all times. Taking water from a ride is also against Disney’s rules and using that water to cook with is most certainly against any Dcotor’s rules as well.

Would you ever drink water from a Disney ride?