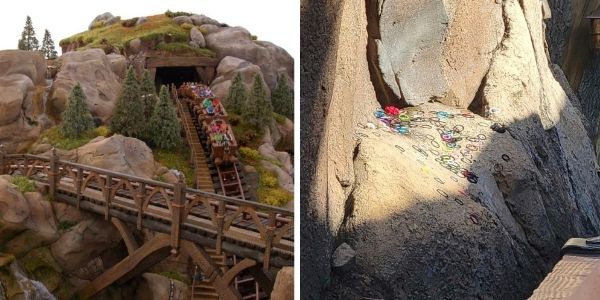 While the Disney Parks and Resorts are sort of known for their cleanliness, there are certain aspects of the Parks that don’t revive the maintenance they may need or deserve.

The outbreak of COVID-19 since 2020 hasn’t helped with this issue, but in general, the Disney Parks and Cast Members do a great job of keeping the Parks clean and safe for the hundreds of thousands of Guests who visit each year.

One issue that has plagued Disney World since the dawn of time is discarded trash. Whether it’s tossed pennies in “it’s a small world” (which is actually a great way to dispose of your cash as Disney donates the money to charity), or piles of trash left at tables, sometimes Disney Guests aren’t very considerate and do whatever they want with their trash.

Recently, one Guest posted a picture they took while on Seven Dwarves Mine Train in the Magic Kingdom. As you can see below, there was a collection of discarded hair ties growing on the side of the attraction:

While this may not be the most pressing issue on The Walt Disney Company’s to-do list, this is still an unfortunate and unsightly problem on what is supposed to be an immersive and properly-themed experience.

It seems like this issue has plagued other attractions like Expedition Everest in Disney’s Animal Kingdom, almost since its creation. The collection of hair ties and bands there is almost like a joke in the Disney community. Everyone knows they’re there, and surprisingly, they are not cleaned out as often as one may think; we can only hope the lengthy refurbishment currently happening on the ride will fix this problem. Unfortunately, the broken Yeti will not be fixed in this refurbishment.

Joe Rohde, the lead Imagineer behind Expedition Everest and Animal Kingdom as a whole, has even spoken out about the hair ties that Guests are tossing onto attractions. Throwing any kind of trash would go against Disney World’s official rules and policies which you can check out here.

Have you noticed anything like this in another area of the Disney Parks? Let us know in the comments below.