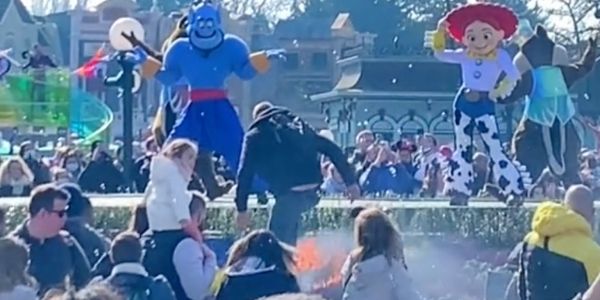 Recently, one Disney Guest made a brave move and jumped on stage during a mid-day performance at a Disney Park to put out a fire.

Although the Disney Parks are filled with magic and pixie dust, that doesn’t mean things always go according to plan. In the past we have seen rude Guests, fights break out and even fires start in the Parks and Resorts. And speaking of fires, a small one broke out recently at the Disneyland Paris Resort.

The incident happened during the Resort’s Dream & Shine Brighter Parade and, as shown in a TikTok from @inpixieitrust, one “heroic” Guest stepped in to help:

A fire broke out while we were watching the Dream & Shine Brighter Parade @disneylandparis last Saturday…. Luckily one guest reacted very quickly

As you can see, the Guest stepped in, and on, in order to save the day. While the fire was small, it still could have led to a bigger fire. Recently at the Walt Disney World Resort in Orlando, Florida, we saw a small fire break out on one of the attraction show buildings in Fantasyland. The fire was believed to be started by a rogue firework or similar pyrotechnics. Thankfully nothing seemed to be damaged in the video.

Have you been to Disneyland Paris? Let us know in the comments below.