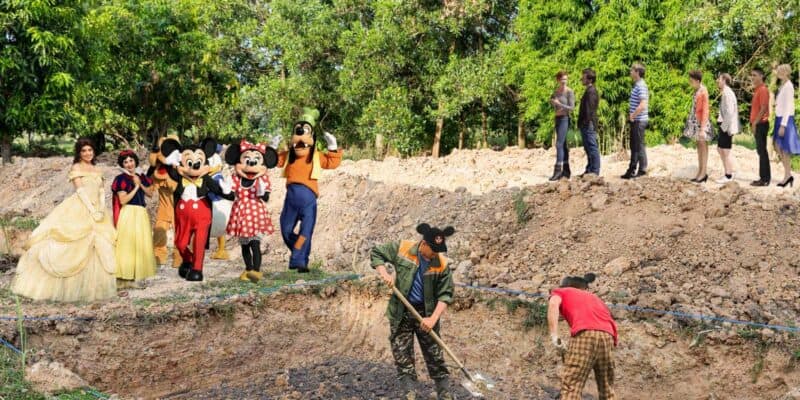 Disney fans are one of the most dedication groups of people. They not only watch the Disney Animated classics on repeat, but they also visit the theme parks around the world as often as they can.

Well now, if you are a Disney fan, you can take your dedication to the next level as reports are stating the Walt Disney Company announced the opening of a new mass grave in which fans can be buried alive with their favorite Disney characters.

The Onion, which is known for absurd, fake news, reported that on Friday, The Walt Disney Company announced a new mass grave site was in the works, which will allow fans to be buried alive with their favorite Disney character.

The report stated that Disney would charge a $109 entrance fee, which is clearly making fun of how expensive the Disney Parks are, which is something many fans have complained about, especially with the introduction to Disney Genie and Lightning Lane at Walt Disney World and Disneyland.

“We know that people absolutely love the joyous experience of our theme parks, so why not let them spend eternity with Mickey, Minnie, Snow White, Elsa, Anna, and the rest of their favorite pals,” said Disney CEO Bob Chapek, explaining that a $109 entrance fee would give fans access to the sprawling 200-acre open pit, which will also leverage properties from Pixar, Star Wars, and Marvel as it seeks to become a final resting place for a broad cross-section of media consumers.

“At Disney’s Eternal Kingdom, fans will line up and await their turn to be thrown into a hole in the ground where, as the dirt is shoveled over their still-living bodies, they can slowly suffocate and die with the likes of the Hulk, Winnie the Pooh, Kylo Ren, Buzz and Woody, or the entire ensemble cast of Encanto. Disney Genie Plus users can purchase a Lightning Lane selection and skip the line to pass into the next world even faster—all while choking to death on pixie dust that will be shoveled into their mouths by Tinker Bell herself.”

Chapek went on to announce his retirement, saying there was no more he could do after finally realizing all the goals of Disney’s famed “cradle to grave” business model.

This news report has gone viral, being shared to multiple Disney Facebook groups as fans are getting a kick out of this.

Again, we want to make it very clear that this news is from The Onion, who is known for reporting absurd, fake news and this is not a real report — meaning The Walt Disney Company is not building a mass grave site.

What did you think of this fake news report from The Onion? Let us know in the comments below.