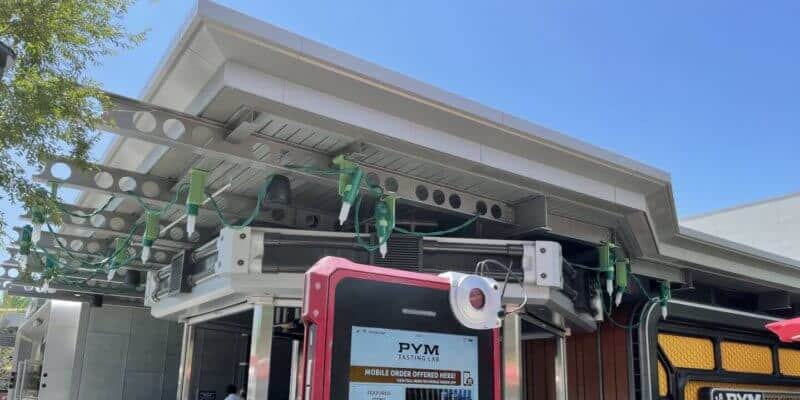 June 4 marked the highly-anticipated opening day of Avengers Campus at Disneyland Resort’s Disney California Adventure Park. Marvel fans have been waiting for this date for quite some time, and many still can’t believe they are now able to visit Disney’s first Marvel-themed land.

From Captain Marvel to Spider-Man to Iron Man to Captain America to Black Widow and more, Avengers Campus Guests never know who is going to pop up in this immersive new Disney Parks area.

But, to make space for Avengers Campus to be built, another land had to say goodbye. In 2018, Disneyland Resort announced it would get rid of the a bug’s land section — part of which (the It’s Tough to Be a Bug stage) opened with Disney California Adventure Park in 2001 — to make way for Marvel’s takeover.

Walt Disney Imagineering didn’t forget about a bug’s land, however. They made sure to include a fun Easter egg at the new Pym Tasting Lab, designed to showcase drinks created by Dr. Hank Pym (Michael Douglas in the MCU) and, presumably, his daughter Hope (Evangeline Lilly in the MCU) and her boyfriend Scott Lang (Paul Rudd in the MCU).

The iconic Christmas lights from the a bug’s land area proudly hang at the Tasting Lab, a reminder of what once stood where Avengers Campus is today!

The Christmas lights look even more amazing at night, as you can see in the photos below.

This is a fun tribute to the former land, which was themed to Pixar’s first film, A Bug’s Life (1998). D23 officially describes a bug’s land as:

There are also a number of other a bug’s land Easter eggs throughout Avengers Campus, proving that Disney truly didn’t want to forget about what originally stood where all of our favorite Marvel super heroes can be found today.

Out with the old and in with the new! Disney officially describes the brand new Pym Tasting Lab as:

Pym Technologies, known for their revolutionary Pym Particles, operates this advanced research and development space in Avengers Campus where they can tinker with brilliant new brewing systems. Now, for the first time ever, members of the public are invited to taste the results!

What do you think about Disney Imagineers paying tribute to a bug’s land when they designed Avengers Campus?

Let the expert team at Academy Travel help you plan your next magical Disney Parks vacation to Disneyland Resort and the Downtown Disney District in Anaheim, California or Walt Disney World Resort and the Disney Springs neighborhood in Orlando, Florida!