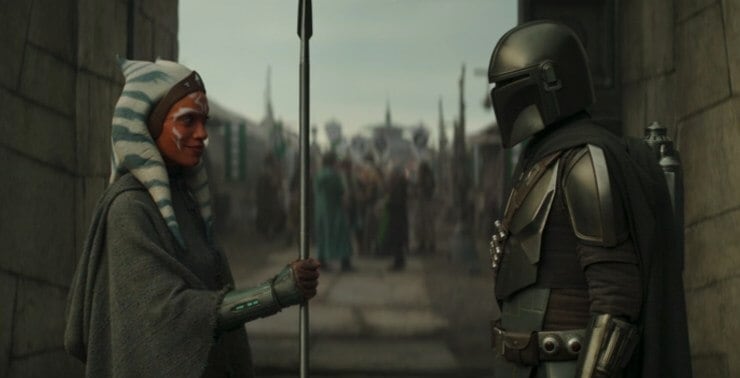 As fans countdown the as-yet-unknown number of days until The Mandalorian Season 3 debuts on Disney+ — we know, we’re already thinking about making “Baby Yoda” snacks to celebrate, too — they’re scouring the internet for any scrap of information about the upcoming season of the hit Star Wars series.

Speaking to IndieWire, Chilean actor Pascal confirmed that a timeline jump — in some capacity — will happen in Season 3:

“I am told what’s happening and what the plan is, but I can’t share it,” Pascal said. “They are in the expansion of this world, where there are so many unexpected surprises and timelines that are going to be dealt with.”

Pascal — who got to remove his beskar armor helmet on two occasions in the second season of The Mandalorian — continued with a tease of what’s to come as bounty hunter Din Djarin continues his adventures:

“If the character were to cross over into these worlds, it will be utilized in a way that isn’t meant to be expected. I wouldn’t want to spoil the surprise of whether or not characters from the show we already know are crossing over.”

Pascal’s comments immediately lend credence to the theory that The Mandalorian saga — including spinoffs Ahsoka and Rangers of the New Republic, which are set to air concurrently with Season 3 — will introduce animated series Star Wars Rebels’ World Between Worlds in live-action for the first time.

The World Between Worlds was how Dave Filoni and his team introduced time travel to the Star Wars universe. This has a number of intriguing potential implications as we move ahead into the future of The Mandalorian and its spinoff series.

We already know, for example, that Jedi Ahsoka Tano (Rosario Dawson) will be the focus of the Ahsoka show — this is the most likely place for the World Between Worlds to show up as she searches the galaxy for Grand Admiral Thrawn (voiced by Lars Mikkelsen in Rebels/rumored to be played by Marvel’s Robert Downey, Jr. in live-action) and fellow Jedi Ezra Bridger (voiced by Taylor Gray in Rebels).

Less is known about Rangers of the New Republic, but it seems likely that it will follow New Republic Marshal Cara Dune (Gina Carano) as she navigates Nevarro, possibly even delving into Moff Gideon’s (Giancarlo Esposito) cloning plans that may have led to the creation of the sequel trilogy’s Supreme Leader Snoke.

Knowing that all of these shows are interconnected, there are numerous directions Jon Favreau and Dave Filoni could go in regard to the overall storyline. The Mandalorian is set approximately five years after Star Wars: Episode VI – The Return of the Jedi (1983) and about 25 years prior to the introduction of Rey (Daisy Ridley), Poe Dameron (Oscar Isaac), and Finn (John Boyega) in Star Wars: Episode VII – The Force Awakens (2015).

By utilizing the World Between Worlds and the Veil of the Force, Favreau and Filoni could theoretically introduce characters who weren’t even born yet — or even Snoke himself. They’ve already brought back a CGI de-aged version of Mark Hamill as Luke Skywalker in The Mandalorian Season 2 finale episode (“Chapter 16: The Rescue”), so anything is possible.

At this time, the most up-in-the-air story arc actually belongs to Jedi Knight Skywalker and his new charge, Grogu (AKA The Child AKA Baby Yoda).

We don’t yet know if the duo will receive their own spinoff series — possibly even featuring Luke’s Star Wars Legends wife, Mara Jade, if the social media rumor mill is to be believed — or if they will pop-up in one of the trio of interwoven Mandalorian shows.

The Star Wars fan base has proven their love for what Favreau and Filoni are doing with their Mandalorian star and the rest of the cast. Now, we just have to wait and see where the next chapter of the saga takes us.

What do you think will happen with this newly confirmed upcoming Mandalorian time jump? Are you looking forward to seeing The Mandalorian’s Pedro Pascal back in action?