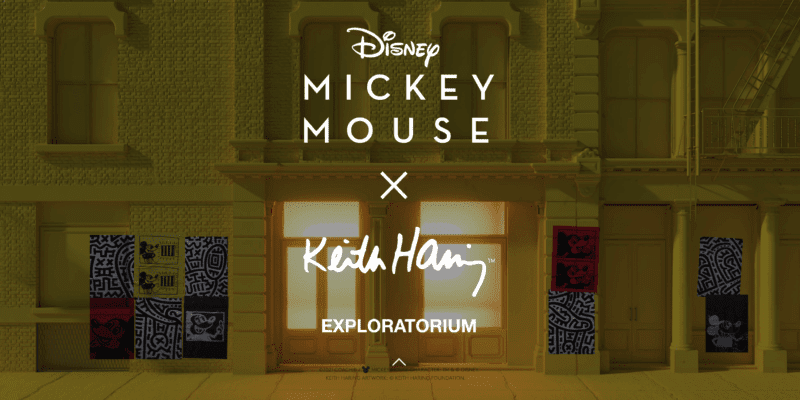 Alright, this Disney x COACH x Keith Haring team up just keeps getting cooler! We’ve already shared the Coach and Disney by Keith Haring collection that’s flying off the shelves since it first launched at the end of December. So what more can we expect from this quirky and edgy collaboration? An exploratorium!

Having virtual events seem to be the norm as of late, and we’re really digging this out of the box idea, though it’s no surprise that Keith Haring is involved with his eccentric nature.

Think of this as an exclusive event that’s Disney meets art gallery exhibit meets shopping experience in New York City. Head on over to explore five different rooms to learn more about the artist and the collection, as well as, a bonus room that contains Instagram AR filters for you to have fun with!

Enter into the lobby where you’re greeted and welcomed into a bright gallery of color. As you head down the hallway, you can read up on the inspiration that fueled this collaboration to come to life.

Artist Keith Haring (1958-1990) was inspired by the art of Walt Disney from an early age, learning to draw Disneyʼs Mickey Mouse from a Disney “how-to-draw” book he found at his grandmotherʼs house. Well into his teenage years Haring wanted to be a cartoonist, thinking he could work for Disney, though he ultimately went on to study fine art.

Eventually, Haringʼs passion for both cartooning and the visual arts combined in what became his unique and widely recognized style.

Immediately, you will be able to interact with this new age art gallery because, as this exploratorium says, “please touch the art.”

It feels like an awesome way to break the traditional art gallery rules! This might be an exclusive exploration for us, but one Disney friend is sure to not miss the party — Mickey! These large totes exhibited here are sure to make a statement.

Spend some time checking out these smaller pursed that fill up the room. Each on showcased on its own pedestal to let it shine and have its moment.

Does anyone feel like graffitiing in a New York subway station? Well, you can do it here without actually tagging anything and breaking the law. It’s even better when it’s a professional artist coming up with the creation!

Here’s where you get even more interactive with the Disney x COACH x Keith Haring pairing through social media. Bring the art into your world!

COACH has done a fantastic job working with Disney in the past to transform the classics into classy for Donald Duck, Pluto, and of course, Mickey Mouse. This triple team-up has gone above and beyond in the realm of cool. Enjoy exploring fellow Disney fans!

What are your thoughts on this new interactive exploratorium? Let us know in the comments below.

Comments Off on Interact Inside The Disney x COACH x Keith Haring Exploratorium!