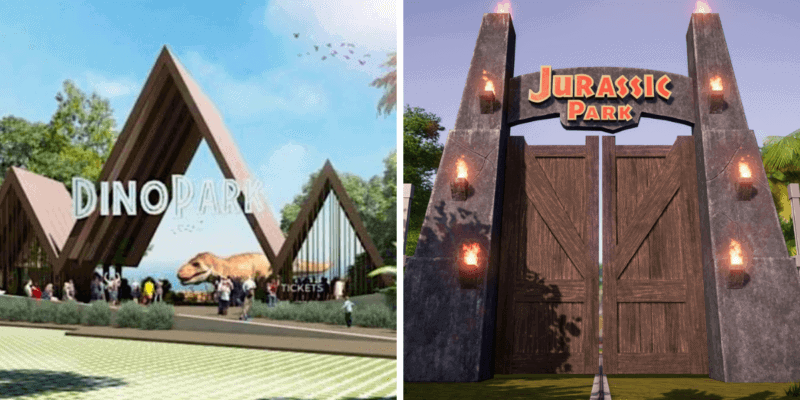 While the new theme park isn’t actually based on the Jurassic Park series, it certainly seems like the closest thing we’ll get to John Hammond’s vision for a prehistoric park!

The new park is set to open in 2021 in Malaga, Spain. Instead of cloning pieces of amber using ancient DNA, the Rincón de la Victoria Dinosaur and Zipline Theme Parks will instead use more traditional set pieces, aka 35 replica dinosaurs.

According to The Sun, more than half of these will be life-size and to scale, while 16 of them will move (presumably as animatronics, not cloned dinos!). The park will be filled with extinct species familiar to those who enjoy the Jurassic World and Park movies.

There will also be various dinosaur-themed restaurants and bars and a hiking trail based on prehistoric Europe. There will also be a souvenir shop where you’ll presumably be able to take home a dinosaur fossil or dinosaur bone! As you can probably tell by the park’s name, it will also incorporate a zip line, though details on the length and height have not yet been revealed.

The park will open in phases, with the dinosaur land coming next year. Zipline construction will allegedly begin in 2024. Rincón de la Victoria Dinosaur and Zip Line Theme Park will cost €3.6 billion and hopes to become ‘the best-known family park in Malaga’.

The answer to Jurassic Park?

Mayor of Rinconero, Francisco Salado, said, “This theme park will be a tourist attraction with education elements based on the world of dinosaurs, where both large and small can actively enjoy their time.”

Currently, Universal Studios parks are the best place for any theme park enthusiasts who love the Jurassic Park franchise to visit. However, this ambitious Spanish park certainly seems like it could rival the beloved series if it gets it right. It’s worth noting that there’s no mention of roller coasters or other white knuckle rides though, so we doubt Universal has much to worry about at this stage.

Still, it’s cool to see something new and we hope the park succeeds. Let’s just hope it doesn’t go the way of the Jurassic Park from the movie!

What do you think of the real-life Jurassic Park? Let us know in the comments below.