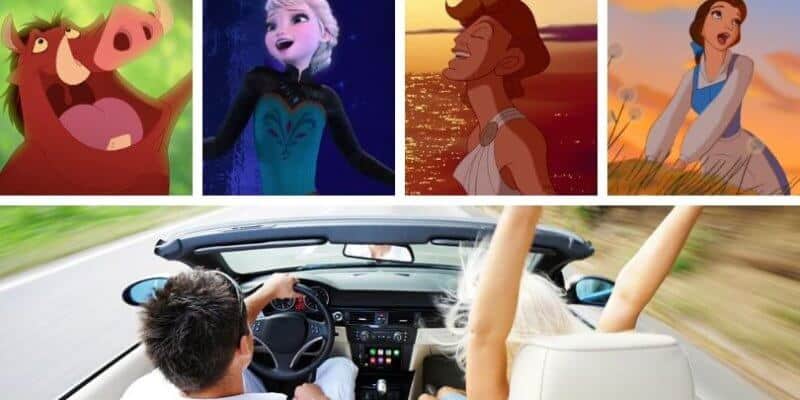 If you are a true Disney fan, you definitely have a Disney playlist ready to go for any car ride or road trip. And it doesn’t matter how many times you listen to your Disney playlist, the songs never get old. You might know which Disney songs are your favorites to listen too, but does your taste match that of the majority?

A new research reveals which Disney songs are most listened to in the car. The research conducted by the website Halfords collected data from several Spotify driving playlists. So let’s take a look at what they found!

The research revealed that the most popular Disney sing-a-long song is How Far I’ll Go from the movie Moana, followed closely by a classic favorite Hakuna Matata.

The Lion King, The Little Mermaid and Moana each had two songs in the top ten most listened Disney songs in the car.

Most Listened To Disney Songs In The Car

The study analyzed over 300,000 songs from Spotify playlists that included terms such as ‘Disney’, ‘car’, ‘driving’ and ‘road trip’ in order to come up with the top ten most listened Disney songs in the car.

You can see that the top ten list is a mixture of beloved classic Disney songs, for classic movies like the The Lion King and Mulan, and new heart warming tunes from films such as Tangled and Frozen.

However, the study went beyond just looking at the most popular Disney sing-a-long car songs, it also analyzed other playlists. For example, the study also showed the most listened to songs from musicals in the car. Even though this list is not Disney specific… Disney still made its way into the playlist with Hamilton!

Most Listened To Songs from Musicals In The Car

From the top 10 most listened Musical songs in the car, Hamilton took eight out of the ten spots — Disney to the win!

If you are interested in seeing other top ten most listened car songs, you can access the research here.

Which Disney song is your favorite to listen to during car rides? And why? Let us know in the comments below.