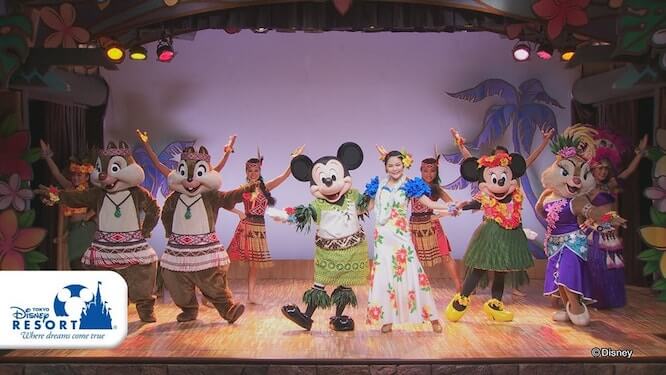 We had a fabulous tip-off of these performances when Twitter user @tdrexplorer proclaimed his excitement about the viewings. We’re with you, Chris! This sounds like just what we needed right now.

Tokyo Disney Resort is uploading final performances of shows that are ending to YouTube for a limited time! This includes Fantasmic! and It’s Very Minnie. https://t.co/RBS729Kagy

Starting March 19, 2020, The special event performance, Pixar Playtime Pals and Very Very Minnie will both be available on the Tokyo Disneyland Youtube Channel. In Pixar Playtime Pals, characters gather to play fun games with Guests of the Resort. The challenge is to complete three games inspired by Toy Story, The Incredibles and Finding Nemo. When the games are finished, tons of characters show up for the celebration.

Very Very Minnie is a new production revue in which Minnie Mouse and her friends “put on a lively performance of songs and dances that range from cute and sweet to Latin and club styles. Featured throughout will be various styles of costumes and music from entertainment that Guests have enjoyed over the years.” – Tokyo Disney Resort This performance starts streaming on March 19, 2020.

On Wednesday, March 25th, 2020, you can look forward to Tokyo DisneySea’s special night entertainment spectacular, Fantasmic! Here at Inside The Magic, we’re looking forward to examining the new takes and features of this fabulous production!

“This visual spectacular seen around the world has a special take in Japan. Featuring Mickey Mouse as the Sorcerer’s Apprentice, a fantastic world of Disney is created through the powers of imagination. Filled with special effects using gigantic water screens, lasers, lights, and fire, this dramatic show promises an evening of unforgettable fantasy and excitement for all.” – Tokyo Disney Resort

March 31st, 2020 will bring us Tokyo Disneyland’s amazing  Polynesian Terrace Restaurant lunchtime show Lilo’s Luau & Fun. This stage show won’t include any fare, but I’m sure you can scrounge your pantry for vittles while you enjoy this performance!

“Lilo from the Disney film Lilo & Stitch has invited the Disney friends and you to a fun luau (the Hawaiian word for “party”) at the Polynesian Terrace restaurant. When Stitch crashes the party, it’s pandemonium! Wearing Aloha shirts and muumuus, Mickey, Minnie, Chip, and Dale go around the tables to greet Guests, start a hula lesson for younger Guests, and create a fun lunchtime with a Hawaiian spirit!”  – Tokyo Disneyland

Log onto the Official Tokyo Disney Youtube Page on these dates to see your complimentary show as the Disney Parks Release Performances to us all.

Which Disney Parks Performances will you be watching? Leave us a comment below!