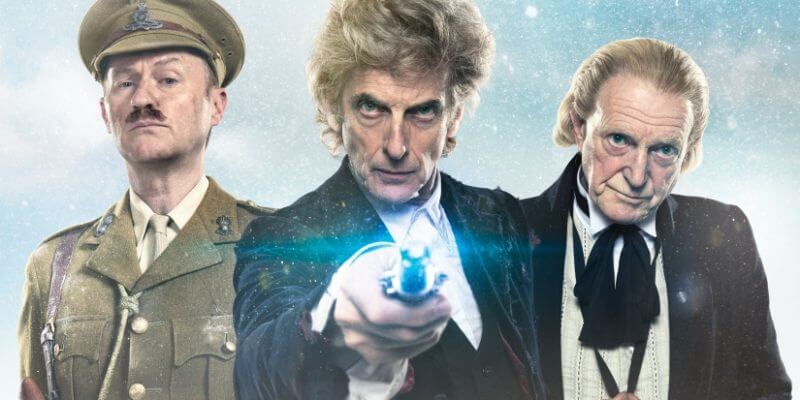 It’s going to be an awesome Christmas for science fiction and fantasy fans this winter.  The next installment of the “Star Wars” saga blasts into theaters on December 15th. Ten days later, on Christmas day, “Doctor Who” fans are treated to the annual holiday special.

Entitled, “Twice Upon a Time,” this year’s “Doctor Who” Christmas special will feature several firsts and a couple farewells, too.

“Two Doctors stranded in a forbidding snowscape, refusing to face regeneration. And a British army captain seemingly destined to die in the First World War, but taken from the trenches to play his part in the Doctor’s story. This is the magical last chapter in the Twelfth Doctor’s epic adventure. He must face his past to decide his future. And the Doctor will realise the resilience of humanity, discovering hope in his darkest frozen moment. It’s the end of an era. But the Doctor’s journey is only just beginning. “ –Den of Geek Joining the original and latest Doctors in this holiday special is “the Captain.”  This WWI officer, portrayed by writer/actor Mark Gatiss (Mycroft Holmes in “Sherlock”), was first thought, by fans, to be a younger version of original series the Brigadier from UNIT.  However, according to Gatiss, that’s not the case.  Rumors and speculation abound as to the significance of this Captain.  Many believe this a nod to real-life police call box inventor Gilbert MacKenzie-Trench. Also, as seen in the trailer above, it seems that Twelve’s companion Bill is mysteriously back from the dead.

First, well, the firsts: the first Doctor, originally portrayed by William Hartnell, is making a magnificent return to the series for the Holiday episode.  Channeling Hartnell, David Bradley (known for portraying Filch in the Harry Potter films) masters the role.  This perfect casting and sure to delight fans who remember Hartnell’s role as the first Doctor (1963-1966), kicking off the long running BBC science fiction series.

“We’ve authentically re-created the First Doctor,” said Moffat. “We could put it out in black-and-white, and you would think it was William Hartnell. There’s new monsters, there’s new jeopardy. But what’s fascinating is the First Doctor confronting the superhero he’s going to become, with his supersize TARDIS and all that.” – Steven Moffat, as told to Entertainment Weekly

Doctor One’s companions are not left out, Lily Travers will be assuming the role of Polly Wright and Jared Garfield will play her husband Ben Jackson.

Another first will be Jodie Whittaker’s arrival as the thirteenth Doctor.  Capaldi’s twelfth Doctor, fighting the end of life and regeneration, will eventually evolve to become Whittakar’s character. “Twice Upon a Time” marks the final episode for actor Peter Capaldi as the Doctor. At least for now – it’s always possible that we might see another multi-doctor episode at some point.  Capaldi’s Doctor was a departure from the recent younger incarnations crafted by David Tennent and Matt Smith. Some loved the more mature approach as a throwback to the original series, while others never got used his style.

Also leaving the franchise is long time showrunner Steven Moffat. He will be replaced with Chris Chibnall (“Broadchurch”).  Chibnall is already in the process on changing things around: the new season will only be 10 episodes long (shortened by two to three installments).  Not to worry though each of those new episodes will get an extra 15 minutes, making them all a full hour long. Are you excited for the Doctor Who Christmas Special, “Twice Upon a Time?” What kind of adventures are you hoping for with the thirteenth Doctor?  Share your temporal transcripts in the comments below (use of sonic screwdriver optional).