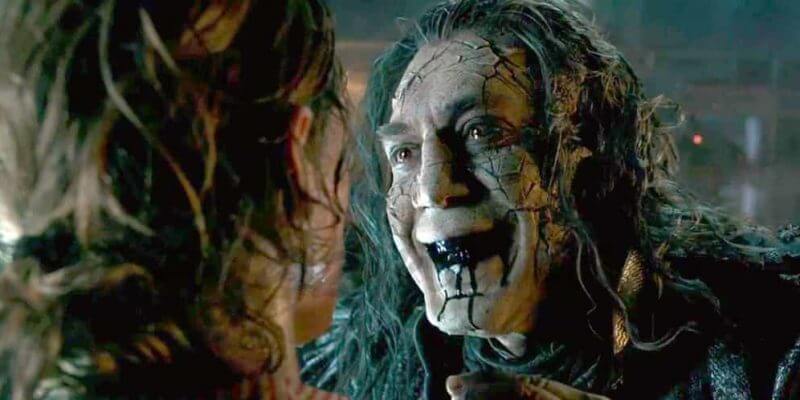 Spanish thespian Javier Bardem has been performing in television and movies since he was five years old, but he didn’t receive international recognition until the 2000 indie darling “Before Night Falls.” He went on to wow American audiences — not to mention win the Academy Award — for his terrifying turn as the sociopathic hitman Anton Chigurh in the Coen Brothers’ neo-classic “No Country For Old Men,” and then portray the memorable Bond villain Silva in 2012’s acclaimed “Skyfall.”

Now Bardem has a central role as the undead pirate-hunter Captain Salazar in Disney’s new “Pirates of the Caribbean: Dead Men Tell No Tales.” Over the weekend, I sat down with Bardem (and a few other reporters) to learn what it took to bring Salazar to (after)life. Q:  You acted alongside Johnny Depp once before. How was it reuniting with him on-screen?

JAVIER BARDEM:  Bad. It was bad. [laughs] Because he looks exactly the same [as he did] seventeen years ago. I [thought], “Man, what happened?” I’ve aged, he hasn’t. He hasn’t aged. I can tell you, [holds up his finger and thumb inches apart] I was this close.

He was exactly the same, back in the day, in 1999, he was a gentle guy. Nice, caring, generous actor who flew from the States to Vera Cruz, Mexico to help us with “Before Night Falls,” [directed by] Julian Schnabel. I love that movie. And he helped us by playing two roles. I was a little bit star-struck when he came to the set, because it’s Johnny Depp, and he’s been so nice coming all the way to Mexico to help us. And I played this scene [with him], and we [had] a kiss. And we kiss each other [makes kissing noise]. He didn’t write me back. [laughs]

And then he kissed my wife [Penelope Cruz, in “Pirates of the Caribbean: On Stranger Tides”] so it’s kind of between the family now. [laughs] And then I’ve seen him through the years, and I was [on the] “Pirates 4” set, and he’s a gentleman. And when I worked with him on this one, I was just amazed by how he is as a clown, to become this character so easily. And the first time [I was acting opposite him] I had to cut the scene, I had to cut the takes because I was laughing. As a moviegoer, I was like, “Wow, here he is! Here is Jack Sparrow!” He will do and say everything he wants and it will be brilliant, because he knows so well. And he’s a player, he likes to play, and he won’t ever let you down. He’s always very caring about the person in front [of him] and giving the exact game for the other actor to play with. He will never let you down. That’s my experience with him.

Q:  What was your experience seeing the first “Pirates of the Caribbean” movie?

BARDEM:  I was in Iceland, in a little tiny fisherman village on holiday [in 2003], and then I saw a movie theater and said, “Okay, I’ll get there,” because I already did my tourist thing. And it was a long time since I [had seen] any pirate movie on screen. [I was] very curious to see this. And I was blown away by Johnny’s work. By the movie [too], but Johnny’s work [primarily]. Like, “Wow, that is challenging.” Now we see [Jack Sparrow] so easily, but back in the day he really took a risk and he scored the goal. And I loved it. And since then I’ve seen them all and some are better than others, but all of them [have] an amazing quality, amazing production value. They are made to entertain, and they are entertaining.

Q:  Did you have any hesitation about joining the cast for the fifth entry in the series?

BARDEM:  No, I knew that the production value of it was going to be fantastic, because I was on [the] “Pirates 4” set so I saw how everything worked out so well. It was more about what to play and what to bring. And [producer] Jerry Bruckheimer, from the very beginning, was very generous in bringing ideas. And me, along with the directors [Joachim Rønning and Espen Sandberg] started to create the character: the way he would talk and speak and where he would come from. The looks were [already partially] decided and [partially] to be decided. We made it together. That’s great, for a movie like this. You think everything is by the book. No, it’s the opposite. They really encourage you to bring your input, which is great.

Q:  Can you talk about the makeup process for this movie? How was Salazar’s look accomplished?

BARDEM:  It was me without sunscreen. [laughs] There was three hours [worth of] makeup. It drives you nuts. The first thing they do is to give you coffee. They’re nice. It’s five o’clock in the morning, it’s cold. You have a fourteen-hour day ahead of you, and they give you coffee. And the second thing they do is to put glue all over your face, like actual glue, with a brush. Like you have a dog [licking] your face. And then they put these chicken breasts on you. And then you don’t talk, eat, or drink for the next three hours. And then you just have to get crazy. They say “Action!” and you [already] have the rage of the character [ready to go].

My hair [in the movie] is crazy. The first time I saw it on screen, I didn’t know how it was going to look, and I was really pleased and grateful for the people who did it. Because it really helps the performance. It gives this softness. It’s great. The effects came after the performance. They adjusted to the performance, which is good. I was worried about that, like, “Should I do something?” And they [said], “No no no, do your thing and we’ll adjust to what you do.” And it’s great. It’s funny because I thought of my character like being a wounded bull, a wounded animal, and sometimes I would be very aggressive on the movements. And I didn’t think about, “If I do that, what will they do with the hair?” But it looks great.

BARDEM:  I’m nice. I’m the nicest guy in the world. Gandhi [next] to me, is nobody. [laughs] No, listen… this is a job. I do what they offer me, and then among what they offer I try to get the best [roles]. But I’m always saying that I’ve only done three villains: “No Country,” “Skyfall,” and this one. But they’ve been very powerful movies, so I guess that’s why the echoes of them are bigger, because they belong to good movies. Different genres, but strong movies.

[Playing a villain] is a gift. It’s a gift that I have the chance to put that out. I think one of the great gifts of being an actor is to be able to give room to your hundreds of thousands of characters that we all hold inside. One of them is rage. And it’s good to give it a voice.

Q:  What do you hope audiences get out of “Dead Men Tell No Tales”?

BARDEM:  [I am] a father and [I] want to make a movie that entertains, that brings joy and laughter. It’s as important as [doing] other kinds of movies that help you to reflect. [This kind of movie is] not less important [than that kind]. The risk is being in a good one, and I think this is a good one.