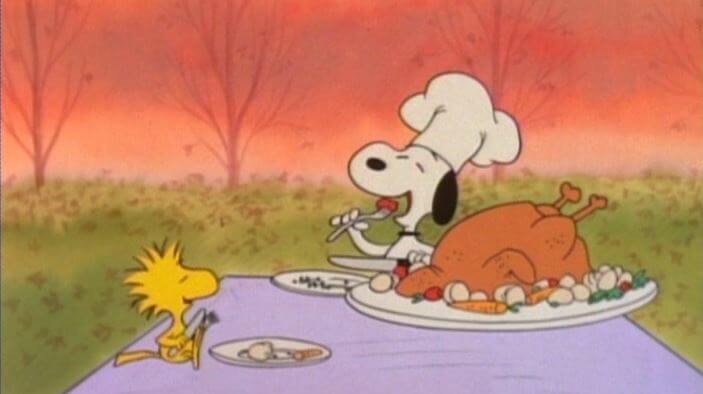 Thanksgiving, the family holiday that seems to get squeezed out as most of America seems to jump from (or even before) Halloween right into Christmas.  For me, this will always be a time for family gathering, the mouth-watering aroma of the Turkey roasting (Grandma having put the bird in the oven long before the parade), TV specials, the agonizing wait for dinner, and the eventual food coma that follows.  The top of my thankful list is filled with just such memories of family long gone, but not forgotten.

For this Fav Five, now that I’m old enough to sit at the “big table”, I’d like to share some of my favorite Thanksgiving Holiday specials and related entertainment:

This movie makes the list for two reasons: first, it is about trying to get home for Thanksgiving and, second, the comedy paring of Steve Martin and John Candy is classic.  I’ll never think of pillows the same way again.

This holiday treat started around the same time as broadcast radio.  Since 1924 this holiday parade has marched the streets of New York City.  During the first few years the Central Park Zoo loaned live animals for the parade.  These were replaced with balloons from Goodyear (which, in the early years were actually released to float free at the end of the parade.  The Macy’s Thanksgiving Day parade serves as the ushering in to the Christmas season (somebody please remind most retailers of this) as Santa Claus has made his arrival since the parades inception (except during WWII, when the parade was suspended). This year marks the 90th for the holiday tradition; step off is at 9am, which is when NBC begins is broadcast (as it has since 1948)

Goofy –How to Play Football

While this is not a Thanksgiving special or even a short about Thanksgiving, it IS about football (and pretty much the ONLY way I really enjoy the sport), which seems to be a Thanksgiving tradition (in that the grown-ups would be found “watching” the game(s) of the day through their food-coma-induced firmly shut eyelids)

This one first aired in 1989 on CBS.  The special has Garfield trying to avoid a vet appointment the day before Thanksgiving.  Jon invites the vet, Liz, to dinner, but doesn’t know how to cook the dinner.  To make matters worse, Garfield has been put on a diet and is thwarted by Odie at every attempt to sneak food.  Grandma saves the day by coming in to cook the holiday feast.

This one started its annual holiday airing around the same time I started to understand and enjoy cartoons: 1973.  Chuck’s friends invite themselves to his place for Thanksgiving, leaving him in a bit of dilemma on how to prepare the meal.  Adding insult to injury, Peppermint Patty throws a tantrum over the “meal” of toast, jellybeans, pretzel sticks and popcorn.  The day is saved, after Patty apologizes, as the gang is all invited to Charlie Brown’s Grandmother’s for dinner. This classic cartoon captures the true essence of the holiday about sharing, friends and family – about being thankful for being together.

Thank you, dear reader, for sharing this trip down memory lane with ITM.  We’d love to know what Thanksgiving traditions and/or specials you are thankful for this holiday.  Share your thoughts in the comments below.

Comments Off on FAV FIVE: Our favorite Thanksgiving Specials for the perfect Turkey Day!