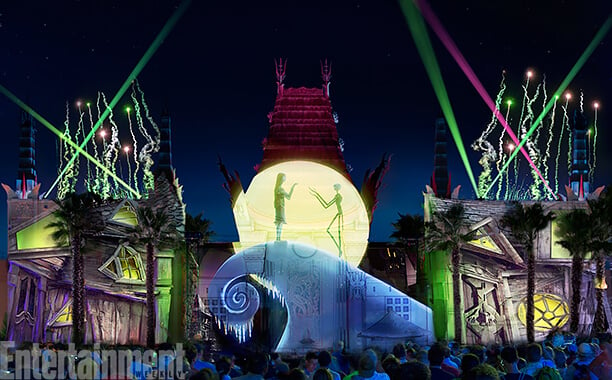 Fans everywhere were devastated this past holiday season when Disney announced that the Osborne Family Spectacle of Dancing Lights would twinkle for the last time at Disney’s Hollywood Studios. Nine months later, though, they may finally find some closure as Disney has just announced a new nighttime holiday spectacular for the park, Jingle Bell, Jingle BAM! and gave Entertainment Weekly the exclusive on this. The new show will be so much more than strings of Christmas lights. It will be a combination of fireworks, special effects, snow, music and projections of Disney’s most cherished Christmas characters up on the Chinese Theater. The “narrative’ will follow these personalities as they set out to see Santa Claus safely return to the North Pole after his Christmas Eve run. Jack Skellington from The Nightmare Before Christmas, Wayne and Lanny from Prep & Landing, and various icons from Bambi, Mickey’s Christmas Carol, Beauty and the Beast, and Pluto’s Christmas Tree will all play a part in the adventure. The entire display will be set to a musical score of traditional Christmas songs, performed with a “twist”–what that means, we know not–and Santa Claus will close the show down with a special message. In keeping with Disney’s recent tradition of dining packages and dessert parties, a special holiday party will be offered for Jingle Bell, Jingle BAM! Beginning one hour prior to each showing, guests will be able to reserve their place for the new holiday party that is held in the Chinese Theater courtyard. The special offering will include seasonal snacks, desserts, and beverages. The cost is $69 (includes tax and gratuity) with a check-in time of 5:45pm at The Great Movie Ride. If you are wondering how Santa feels about all the fuss concerning his annual run, you can ask him yourself. He’ll be greeting guests this year at the Once Upon a Time shop on Sunset Boulevard.